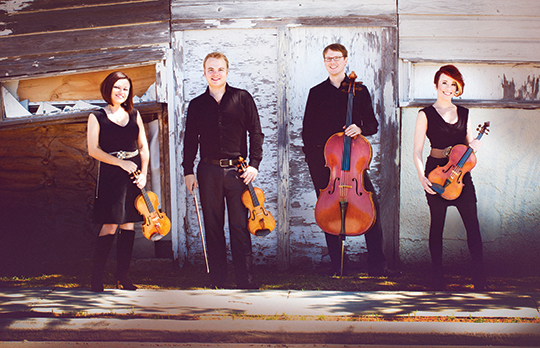 It features the works of Pulitzer Prize- and Grammy Award-winning Jennifer Higdon, Chickasaw classical composer and pianist Jerod Impichchaachaaha’ Tate, and composer and professor Pierre Jalbert of the Shepherd School of Music. In addition to Detrick, Apollo performers on this album include Anabel Ramirez Detrick (violin), Whitney Bullock ’07 (viola) and Matthew Dudzik ’04 (cello).

The 15-year-old organization’s mission is to connect communities and cultures through globally inspired music, and the album embodies that goal.

“The three works on ‘MoonStrike’ weave together nicely because of their storytelling aspects. The title track is most obvious with the narrator/astronaut John Herrington relaying American Indian moon legends as set by the composer Jerod Impichchaachaaha’ Tate. The musical DNA of Jennifer Higdon’s ‘In the Shadow of the Mountain’ is based on her ‘Cold Mountain’ opera as well as her childhood in the Appalachian Mountains. Jalbert’s ‘In the Spirit of the North’ is inspired by the composer’s French Canadian heritage relating the stories and folk music of his ancestors,” Detrick said.

The group recorded “MoonStrike” during the summers of 2020 and 2021 before releasing in 2022. The silver lining is that since the pandemic impeded its usual arts season, the quartet received the time required to create its best recording.

The story of Apollo Chamber Players began in Detrick’s home state of Pennsylvania, when he became fascinated with the cosmos in elementary school and wanted to attend space camp. The budding musician dreamed of becoming the first person to play the violin in orbit. As an adult, he chose Rice to earn both his bachelor’s and master’s degree from the Shepherd School of Music, fittingly located in the heart of Space City.      After finishing his education, Detrick taught K–12 students, played weddings and sought out gigs where he could, but he felt he never truly connected with the passion he felt for music in those endeavors.      “I didn't feel like I was doing what I needed to do and utilizing my talents in the way that I knew I could,” he said. That’s when he decided to launch the chamber group, which took a distinct name uniquely tied to Houston.

The Apollo part of the organization’s name holds a special place in Detrick’s heart. “I did always like the name Apollo, and it was probably the confluence of innate inspirations: dreaming of becoming an astronaut and playing violin in space, attending space camp and loving the movie ‘Apollo 13,’” he said. “Then, I ended up in a city so connected to space, so it’s an homage to Houston as a city of bold ideas and moonshot dreams.”      Having cemented its place in Houston’s arts and culture scene during the last decade and a half, the group began one of its most ambitions initiatives: 20X2020. Launched in 2014, 20x2020 was an Apollo initiative to commission 20 new multicultural and folk music-inspired works for the ensemble by the end of the decade. 20x2020 has raised Apollo’s profile in Houston and internationally as it explored a myriad of cultures. The project inspired Apollo’s documentary feature film “MoonShot,” which has since gone on to win multiple film festival awards and was picked up by the streaming platforms Amazon and Tubi.

Community outreach is also another pillar of the group. Apollo partnered with the Harris County Public Library System to bring live, culturally relevant musical experiences to the Greater Houston area via the 26 branches spanning from Katy to Tomball to Clear Lake.

“My professors at Rice inspired in me a view of the world that was radically inclusive,” he said. “A lot of the programming that Apollo does supports different charities in Houston. Our programming includes all walks of life, all genders and all ethnicities … because that is the city in which we live, and this is what we’re reflecting.”