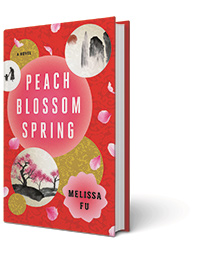 Jade trinkets, antique carvings, a hand-drawn scroll — “Peach Blossom Spring” is a work that posits simple objects and ancient fables as a way to momentarily escape the horrors of war and manage the realities of lived experience. Three generations of the Dao family tell their stories — moving from China to Taiwan and on to the U.S. — while navigating political unrest, physical dangers and the minefields of familial relationships. Ultimately, Melissa Fu’s debut novel relates a moving story of the very human need to find home.

Your career has spanned physics, education and now writing. How did you arrive at writing this novel?

At Rice, I was a physics and English major, and then for years afterward, I bounced between the two. I’ve worked in physics as a researcher, teacher and outreach coordinator. And I’ve worked in English as a teacher, tutor and now, writer. Throughout it all, I’ve written in journals and filled notebooks. It was only after having kids, teaching and living in many places that I made the leap toward writing more publicly.

I blogged; I joined informal writing groups; I sent out a lot of poetry and short form work to literary magazines. And, of course, I got a lot of rejections. But I believe that rejections are a badge of honour for writers. They prove you’re in the game. And slowly, as I improved my craft, I started to build a publication record. Until writing “Peach Blossom Spring,” I really hadn’t written anything book length. But this was a story that just demanded more space, needed more pages to unfold. I decided to let it be as big as it wanted to be, and it turned out to be a novel!

I’ve often wondered why there are so many novels that seem to need three generations to tell stories involving major trauma and displacement. In some ways, I think the first generation lives it, the second generation tries to live beyond it, and the third generation has enough distance to look back and try to make sense of it all.

There is a complicated tension between holding things and people and memories close and then letting things go in the novel. How do you balance these two ideas?

I love this question. This balance is difficult to find, and I think it’s a dynamic balance, constantly adjusting as new experiences arise and old ones take on different meanings. Maybe we hold things close until we need to let them go, and I think it’s both a personal task as well as a multigenerational pursuit. I’ve often wondered why there are so many novels that seem to need three generations to tell stories involving major trauma and displacement. In some ways, I think the first generation lives it, the second generation tries to live beyond it, and the third generation has enough distance to look back and try to make sense of it all.

I hadn’t thought to question the idea of belonging. But maybe it is a false pursuit. Maybe it’s not achievable. There’s a tendency to think that belonging means a certain kind of finality, an unshakeable sense of home. But when you look or listen closely, people are always changing and whatever we call home is always evolving. Could it be that the ways we don’t belong show us who we are? I guess more than I value belonging in any external sense, I’ve come to value a sense of continual curiosity about how we live our lives and the choices we make. That is, a feeling of not-belonging can engender a deep curiosity. And there’s a lot of creative mileage that comes from such a curiosity.

When I was younger, I’d take off on an adventure to find a hidden paradise in a heartbeat. So many paradises must be waiting just beyond the horizon! And over the years, I’ve been lucky to have experiences of finding, if not paradises, then people and places that I’ve treasured. Now, I think I would find great joy in tending an orchard. It might have to be metaphorical, though, because I’m a terrible gardener. The experience of having searched for paradises would enable me to marvel at my own. 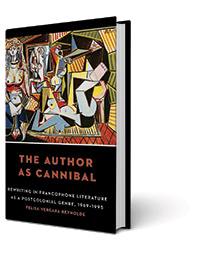 The Author as Cannibal
Rewriting in Francophone Literature as a Postcolonial Genre, 1969–1995
Felisa Vergara Reynolds ’00, ’02
University of Nebraska Press, 2022

The trope of the savage cannibal is one of the most problematic relics of European colonialism. By classifying non-European populations as subhuman and fixating on the “fantasy of cannibalism,” as Felisa Vergara Reynolds puts it, Western colonists justified the subjugation, exploitation and outright massacre of indigenous people they encountered in the so-called New World.

“The Author as Cannibal” is a study of literary cannibalism, which Reynolds defines as a formerly colonized author “consuming” canonical works of literature in an effort to criticize postcolonial society — and to dismantle the legacy of colonialism. Studying four representative works by authors from former French colonies in Africa and the Caribbean during the decades following the end of colonialism, Reynolds examines the ways the authors appropriate, revise and rewrite texts including Shakespeare’s “The Tempest” and Brontë’s “Wuthering Heights” as an act of protest, resistance and revolt.  — Jennifer Latson 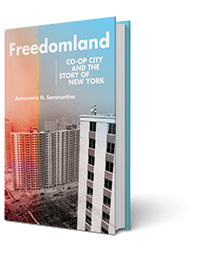 Situated on the edge of the Bronx with 35 high-rise towers and more than 40,000 residents, Co-op City could be a city of its own. While this massive housing development, the largest in the U.S., was designed to be a panacea for New York’s affordable housing crisis in the 1960s, its legacy is more complicated. In “Freedomland,” Oberlin College historian Annemarie H. Sammartino calls it a “monument to imperfect liberal ideals of economic and social justice.”

When the development first opened in 1965, New Yorkers were eager to join its waiting list. Although racial turmoil roiled the city, residents of all ethnic backgrounds tended to see Co-op City as a paradigm of successful integration, according to Sammartino. But problems simmered beneath the surface, starting with construction defects and cost overruns that led to rent increases, provoking a 1975 rent strike in which residents ultimately gained control of the housing cooperative. But full control meant full responsibility for the development’s debts, which drove rents even higher. Rising crime in the 1980s spurred white flight, and gentrifiers of the 1990s scorned the high-rise towers in favor of housing with more “character.”

Despite its troubles, however, Co-op City has fulfilled at least some of its founders’ vision for a haven of affordability for the middle and working classes. Sammartino writes, “The people who live there enjoy the privilege of affordable housing in an increasingly unaffordable city.”  — J.L. 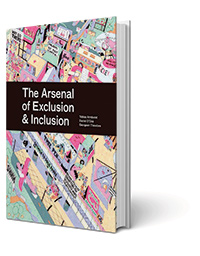 When an upscale shopping center pipes classical music through outdoor speakers, it’s not just setting a mood. The objective isn’t so much to attract customers as it is to repel the kinds of people most likely to find the music off-putting — such as teenagers who might skateboard in the parking lot, loiter outside the shops or otherwise deter the shopping center’s target demographic of well-heeled adults.

In “The Arsenal of Exclusion and Inclusion,” classical music is listed as one of 202 “weapons” used by architects, planners, policymakers, developers and others to restrict access to urban space. The book, produced by Interboro, a New York-based architecture, planning and research collective led by Tobias Armborst, Daniel D’Oca and Rice alumna Georgeen Theodore, examines how tools ranging from classical music to fences to eminent domain have been used as weapons to keep out unwanted types. Part encyclopedia, part manifesto, the book also proposes ways to counter those anti-accessibility efforts and make more people feel included and welcome in public spaces. — J.L.