The Peripatetic: Chasing The Molecules of Nature

Like a highly reactive molecule, K.C. Nicolaou is strongly attracted to the discipline of chemistry. And people. And places. And pastry. The Rice scientist most famous for his total synthesis of the widely used cancer drug paclitaxel discusses all in detail in his autobiography. 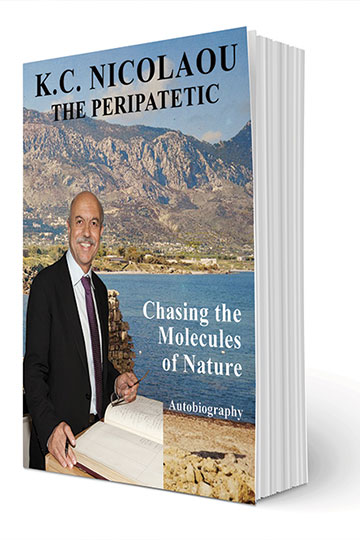 The book is a richly illustrated history of not only a remarkable life, but also of synthetic chemistry itself. Nicolaou, Rice’s Harry C. and Olga K. Wiess Professor of Chemistry and a winner of the prestigious Wolf Prize in Chemistry, has pioneered the building blocks necessary to synthesize therapeutic molecules either from scratch or found in nature but available in quantities too small to be useful.

The influence of his Harvard mentor, Nobel laureate E.J. Corey, figures heavily in Nicolaou’s story. Corey dubbed him K.C. upon his arrival — it stuck — and then introduced him to the intricacies of synthesis over three years as a postdoctoral researcher. His career has led him through faculty and research positions at the University of Pennsylvania, the University of California San Diego and the Scripps Research Institute before his arrival at Rice in 2013.

Nicolaou’s narrative includes an account of his upbringing in the picturesque island nation of Cyprus, as well as the Turkish invasion of his home in 1974. He had by then decamped to Harvard with his new bride, Georgette, but offers both devastating and heroic personal stories from the war provided by family and childhood friends.

Nicolaou puts his ongoing career into perspective, up to and including the age of COVID-19 and how history may judge our handling of the crisis. In that light, he makes a strong case for the advancement of synthetic chemistry and the “mother of all good things,” education and training.