Classnotes: Tunnels, a Python and a Pergola

“We pre-med students needed good grades to get into med school, and we had to compete with older WWII veterans and each other. Rice buildings were connected by utility tunnels, which we used to steal cardboard boxes of ice cream from the dining room freezer. The tunnels also accessed faculty offices in which students found discarded exam question papers. … A scheme to raise athletes’ and pre-meds’ grades was devised. [Professor] Joseph Davies ’28 (BA; MA, 1929; PhD, 1937) wrote exam questions on the blackboard, and students answered on blank answer booklets. Improved answer booklets replaced originals via tunnels. Davies marked originals with needle holes so he recognized replacements. Athletes lost credit for biology, and one pre-med was thrown out. Went to UT, started over, became a physician.” — Contributed by Dan Allensworth ’51 (BA)

“Sue McElfresh and I have been RVing now for 21 years and about 130,000 miles in the U.S. and Canada. Having the RV was handy for the last year as we could go to state parks and to my daughter’s house in Delaware and park in the street for gathering outside. We have quit competitive golf and are walking the trails in state parks and the 2-mile trail around the lake behind our house. Recently, we were at two Pennsylvania state parks on the Appalachian Trail. … Our next RV excursion in the fall is to our new national park, the New River Gorge in West Virginia.” — Contributed by Judy Poinsett ’62 (Jones: BA)

“David and I celebrated our 50th wedding anniversary May 22 by visiting my nephew’s regenerative farm in Carthage, Mo. We learned about new techniques for raising chickens, pigs and cows in ways that are nonpolluting and that help replenish soil nutrients. David is retired, but I still work full time as a dog and cat veterinarian in Fort Worth. We have two grown wonderful daughters, one incredible daughter-in-love and two amazing grandsons. Four dogs, two cats and a ball python named Violet. Life is good!” — Contributed by Rosemary Cooper Lindsey ’73 (Brown: BA) 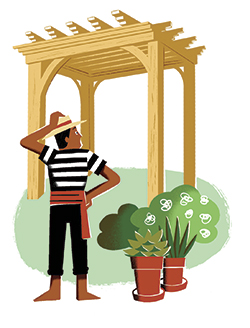 “I’m working in rural emergency rooms, living the life, living the dream. Got an MBA in finance at the Union Louisiana at Lafayette because rural facilities are dropping like flies when they’re most needed. Most of the issues are operational and financial. Probably should have taken a business class or two before starting my business back in the day. The girl is about to be a sophomore at U. of Houston. Econ and pre-med, so she’s been paying attention. The boy is about to be a high school junior. They both have their first summer jobs. I told them I’d use their names when they had a job, but they haven’t finished the 90-day probationary period. My wife, Christina Garcia ’07 (Will Rice), ordered a pergola. I thought we were getting a Venetian boat, but now there’s a wooden structure in the backyard that does not float. I turn 50 next year and I’m always kind of in pain. Wear a mask indoors and get a vaccine. I don’t need additional clients.” — Contributed by Kenneth Stanley ’94 (Lovett: BA)