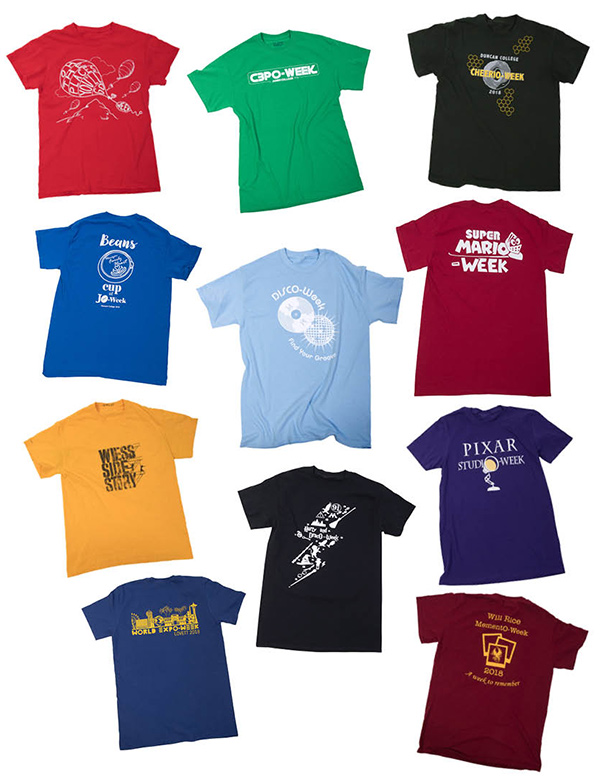 Welcoming incoming freshmen to Rice is a yearlong project supervised by dozens of students, staff and volunteers who create welcome vide-Os, portfoli-Os and, best of all, dozens of punny O-Week themes. Here’s the scenari-O.

Three students who have signed up to be O-Week coordinators from each college get together during the spring semester to choose a theme, explained Duncan senior Jason Barton. Barton, along with Rachel Wiggans ’18, was in charge of the campuswide O-Week  — a paid position that lasts almost a year. “The students usually brainstorm themes that resonate with their mission statements, visions and goals for O-Week,” he said. One widely observed rule is that the theme must end in the sound of the letter O.

Points for cleverness abound. In 2010’s freshman handbook, Will Rice went with “Uh-Oh Week: An O-Week of Bad Ideas” and used an image of a fork approaching an electrical socket. Sid Rich’s 2008 motto was “Trashy Talk ShO-Week.” The themes set the tone for each college’s O-Week activities. Decorations are prepared, props are set up, and T-shirts designed and printed.

Some themes seek to be timely: McMurtry’s 2010 “RonaldO-Week” referenced one of that summer’s World Cup stars. Pop culture puns are perennial faves. Jones’ 2011 theme was “Pikachu GO-Week,” and Sid Rich’s 2004 subject was “Carmen SandiegO-Week,” playing off a PBS children’s show. While literary and movie themes are extremely popular, the award for most cinematic citations probably goes to “Star Wars,” which has enthralled generations of O-Week coordinators. There have been at least three “Hans SolO-Weeks” over the years: Will Rice 1996, Duncan 2010 and Brown 2016.

Among the 2018 crop of themes, Wiggans calls out Baker College’s “Oh the Places You’ll GO-Week,” inspired by the Dr. Seuss classic. “It really embodies the transition these students are making coming to Rice and emphasizes all the future opportunities that come along with it,” she said. Barton is partial to Duncan’s “CheeriO-Week: Be Happy, Be Healthy,” “because they wanted to emphasize the importance of mental and physical health on college campuses.” Wiess College takes a different approach. Its theme, every year, is simply “Team Family Wiess.”

Watch a video about O-Week here.