By Laura Furr Mericas  •  2 weeks ago

Dan Weaver is the James Bond of chemical-free bee breeding. 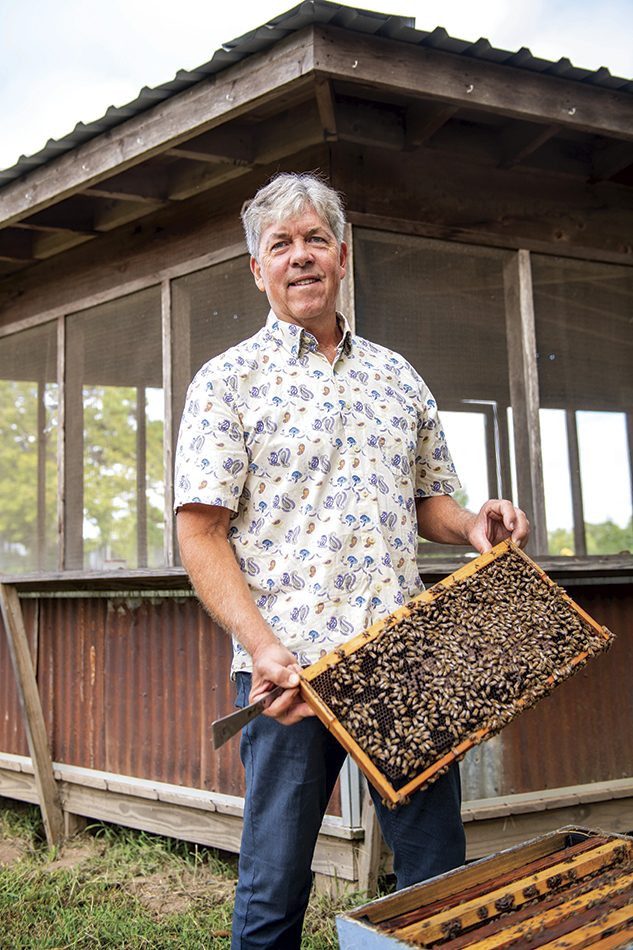 If natural selection had run its course, Dan Weaver ’81 would not have joined his family’s beekeeping business, let alone become the first apiarist to rear a new breed of disease-tolerant bees.

Weaver — like the children of many beekeepers — was born allergic to the buzzing, stinging insects. But a few rounds of shots and a decade later, a young Weaver was “catching queens” with his father, the fourth-generation owner of Weaver Apiaries founded in the small town of Lynn Grove, Texas, in 1888. “I was a reasonably accomplished beekeeper by the time I left to attend Rice,” Weaver says.

A post-graduation job practicing civil litigation didn’t exactly lead him down the road to genetic discovery, either. But after a few years at an Austin-based firm, Weaver returned to his hive to join the family business. And the timing couldn’t have been more opportune.

In the ’80s and ’90s, beekeepers were hit by a simultaneous increase in varroa mites and an infiltration of New World African bees. The mites were killing off colonies in droves by transmitting viral pathogens. And the Africanized bees were turning surviving colonies more aggressive by glomming onto hives and ingratiating their defensive behaviors into the colony via takeover by a new, more violent “killer bee queen.”

In turn, apiarists faced more stings, more work, and a greater dependency on pesticides and other harsh chemicals used to treat diseases and viruses. “Straightaway, I decided that I was not going to remain a beekeeper if I was going to have to continue introducing toxins into our colonies,” Weaver says.

So, in 1995, Weaver and his father split from the family business and founded BeeWeaver Apiaries with the goal of breeding a bee that could tolerate diseases spread by varroa mites without the help of chemicals. To do this, the Weavers simply let nature run its course and left their colonies untreated. “We employed the James Bond method of queen rearing,” Weaver says. “Live or let die.”

The initial results were bleak. Several thousand colonies and millions of bees did not survive the infestation that ensued. But some stronger, heartier bees — perhaps strengthened by genetic traits passed on by the Africanized bees — made it. And those bees became the foundation stock for subsequent generations.

These days, BeeWeaver — now run by Dan and his wife, Laura — is buzzing with business. Respected beekeepers and even viral TikTokkers have bought and built colonies around BeeWeaver queens, which sell for about $42 a bug. A national appreciation for locally sourced foods has fostered support for their hive-to-table honey. And as the pandemic forced more people to discover outdoor hobbies, their agritourism arm has grown along with the community of novice beekeepers who call on the Weavers for guidance.

Still, the Weavers are working to perfect their bees and the bees’ future generations. They’ve continued to look for ways to make their breed gentler and more workable — teaching their three children the ropes along the way, too. The goal is for a sixth generation to take over down the road. But with their children in medical school and another studying for the bar, “it remains to be seen whether someone might take interest in the family business,” Weaver says. But, of course, beekeeping is in their genes.