“Beat All My Expectations”

“Beat All My Expectations” 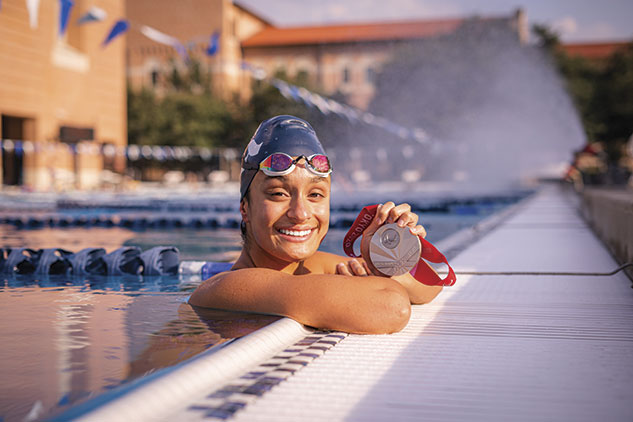 In the middle of her freshman year, Ahalya Lettenberger ’23 had designs on competing in the Paralympic Games that summer. A veteran of international competition — she had represented the United States at the 2019 World Para Swimming Championships, where she swam in five events, reached the finals in four and claimed a silver medal — Lettenberger’s plans were suddenly in flux after students were sent home for the semester.

“That was super hard because the one thing that had given me a sense of normalcy — swimming — was gone,” she said, adding that “not knowing when or if the games were going to happen took a big toll on me.”

Unable to train in the usual ways, she had to get creative. “During the summer, I was just trying to find any way possible to stay in shape, including biking, using my racing wheelchair and doing workouts in my house,” said Lettenberger, who was born with arthrogryposis multiplex congenita (AMC), a muscular/skeletal disorder that affects her hips and legs. “One of my friends even let me use his backyard pool, so I tied a bungee cord and swam in place.” That determination paid off almost a year later, when she got to live out her Paralympics dream after earning a spot in Tokyo, thanks to her performances at the U.S. trials in June and the Para Swimming World Series in April.

“I was able to be surrounded by my family when the team was announced, so it was extra special to be able to celebrate with them because I definitely wouldn’t have made it without their help,” Lettenberger said. “I was also just overcome with gratitude for all the support I’ve had from my family, teammates and coaches.” In the 200-meter individual medley SM7 final Aug. 27 in Tokyo, Lettenberger made a late charge to win the silver medal. Her time of 3 minutes, 2.82 seconds, trailed only fellow American Mallory Weggemann (2:55.48) and was her best ever in an international competition.

“I really wanted to medal, that was my big goal, but being my first Paralympics I really just wanted to take everything I could from it and have a good experience,” said Lettenberger, who finished fourth in the 400-meter freestyle S7 two days after her second-place swim. “Bringing home silver, it beat all my expectations.”