Bioscientist Kory Evans is immersed in the fantastic, fascinating (and a little bit freaky) evolution of fish. His aim is to learn more about the relationship between behavior, environment and genetics in creating the development of an astonishing diversity of species.

From a distance, the jaws of a parrotfish look much like the beak of its namesake bird. Kory Evans, an assistant professor of biosciences at Rice, invites a closer look at the parrotfish specimen he keeps in his lab’s freezer. The “beak” is actually composed of about 1,000 tiny, pale green teeth toughened with embedded metal and fused together with a turquoise cement. Parrotfish like this one use their beaks to scrape algae from rocky surfaces and even to bite through tough coral, which they then crush and grind with a second set of jaws in their throat called pharyngeal jaws. 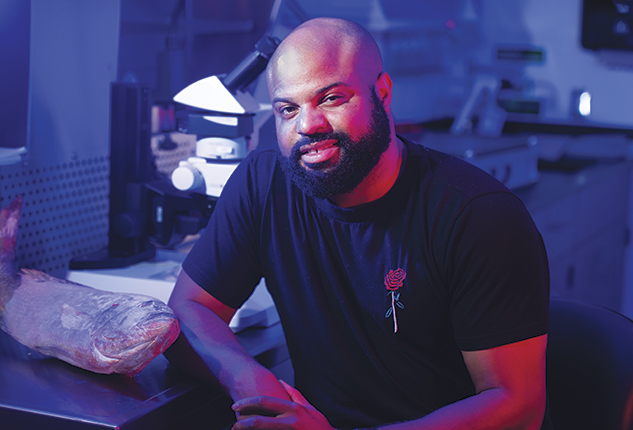 Kory Evans in his lab. Photo by Jeff Fitlow.

While pharyngeal jaws may seem strange, they are quite typical in the fish world: Such an arrangement has evolved nine separate times across the phylogeny of fishes. In addition to the family that includes parrotfish, “damselfishes have them — a fictional example would be Nemo the clown fish — as well as cichlids, which are common aquarium fish,” Evans says.

“Fish are weird,” Evans summarizes, and he loves them for it.

“Ray-finned fishes, which is what we usually think of when we think of a fish, are arguably more morphologically diverse than all the other vertebrates put together,” he says. In fact, there are more than 30,000 species of fish on the planet — more than all other vertebrate species [reptiles, amphibians, mammals, birds]combined.” This makes them a perfect group of organisms for a scientist interested in morphology, or body structure, to study. “I like to see how the environment shapes the appearance of fishes,” Evans says. “I focus on how animals are using their bodies to interact with their environment and with each other and how that influences skull shape.”

His research teases apart the complex interplay between environment and genetics as they shape evolution. Any time he investigates a new aspect of skull shape, he must consider the fact that “these traits can emerge during development, but once an animal is done developing, even though it’s not still growing at the same rate, things are still happening to its bones. Bone shapes itself based on the direction of the force that’s applied to it,” he explains. This means that an observed difference in bone structure could result from evolution of genes related to the bones themselves, genes related to the muscles, behavioral traits influencing how the muscles and bones are used, differences in the environment that influence behavior or all of the above. 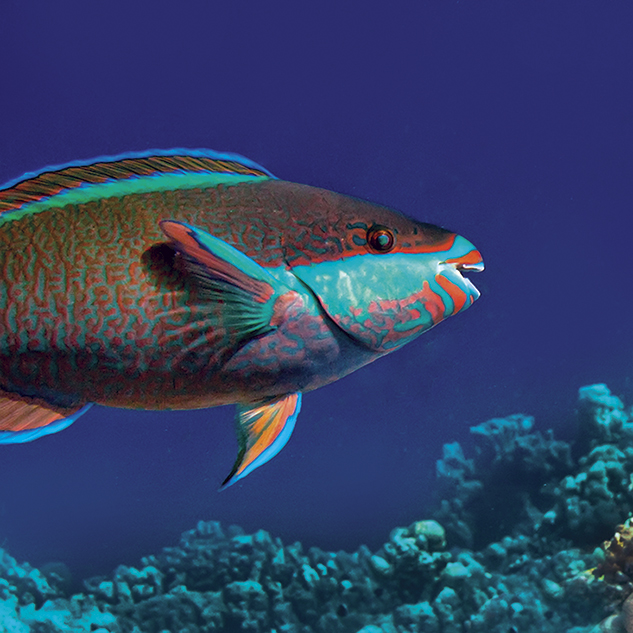 Because of the intricate interactions between environment and genetics, members of the Evans lab — postdocs Olivier Larouche and Thaddaeus Buser as well as graduate students Sean Trainor and JoJo West — collect both bone morphology data and extensive environmental data. The group gathers information on fish body structure using micro-CT scans to create virtual models of fish skeletons. “I’ll have a bunch of preserved fish, and I’ll go and put the fish in the scanner in my lab, and it takes a series of X-ray images. I get this really nice 3D picture of the internal skeleton of the animal,” explains Evans.

“I like to see how the environment shapes the appearance of fishes. I focus on how animals are using their bodies to interact with their environment and with each other and how that influences skull shape.” — Kory Evans

They can also deduce the diets of fish by examining their stomach contents and muscle tissue. Such techniques are applicable not only to freshly collected fish samples, but also to specimens collected in such natural history museums as the Academy of Natural Sciences in Philadelphia or the Field Museum of Natural History in Chicago. Different food sources incorporate isotopes — atoms with the same chemical properties but different masses — of common elements at different rates, allowing scientists like Evans to glean dietary information from isotope ratios in tissue. “I use stable isotope analyses, where you can take a muscle plug out of an animal and combust it. You can figure out what it’s been eating for the last six months and where it’s been getting its food,” he says.

Leveraging the modern capacity to integrate a broad array of information across disciplines such as ecology, morphology and molecular biology enables Evans and his students to understand the evolution of fishes in new ways, and in doing so, to shed light on the eroding dichotomy between nature and nurture.

As part of this ongoing goal, he and other members of his lab have discovered that bones in the skulls of parrotfish like the one in their freezer can be broken down into two groups: structures involved in breathing and those involved in feeding. One hypothesis the group had was that these two groups of skull elements might evolve together as a result of linked gene signaling and expression. However, “that didn’t end up being the hypothesis that won out,” says Evans. In this case, “we think that some of these functional interactions might overwrite genetic ones.” 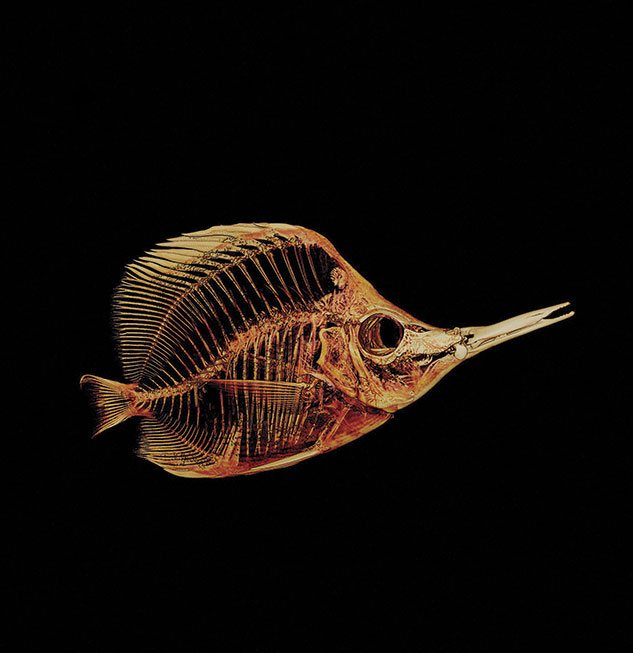 A scan of a longnose butterflyfish by Kory Evans.

On the other hand, gene interaction networks likely did play a strong role in the evolution of another group of bizarre and beautiful fish: flatfish. “They’re the most asymmetrical vertebrate on the planet,” Evans says. “During development, they start out as a normal symmetrical fish, and then as they grow, one eye will migrate to the other side of its head so that they can lay on one side.”

Flatfish started evolving asymmetry around 65 million years ago. In an article published last May in Proceedings of the National Academy of Sciences, Evans and co-authors Larouche and Sara-Jane Watson of the New Mexico Institute of Mining and Technology wrote that flatfish restructured their anatomy almost completely within 3 million years and have retained much the same configuration for the remaining 62 million. In scientific terms, this is an amazingly rapid evolutionary innovation.

“A lot of studies before had really just focused on the eye, but the evolution of asymmetry was integrated, which means that it involved movement of several different bones in the skull at once,” says Evans. Traits can become more integrated if their development is controlled or influenced by shared gene interaction networks. He and his collaborators found that flatfish show far more integration than symmetrical fish and that, as evolution of asymmetry proceeded, traits became even more integrated.

“As the flatfish skull got more and more integrated, more things began to change, per unit time, than a generation before,” he explains, which is the hallmark of an evolutionary cascade. “If the signaling networks expand to encompass more and more traits, then you can theoretically smear changes all across an entire organism using the same signaling network, and you can change really fast,” Evans elaborates. “It’s like pressing one button and flipping the whole animal all at once.” 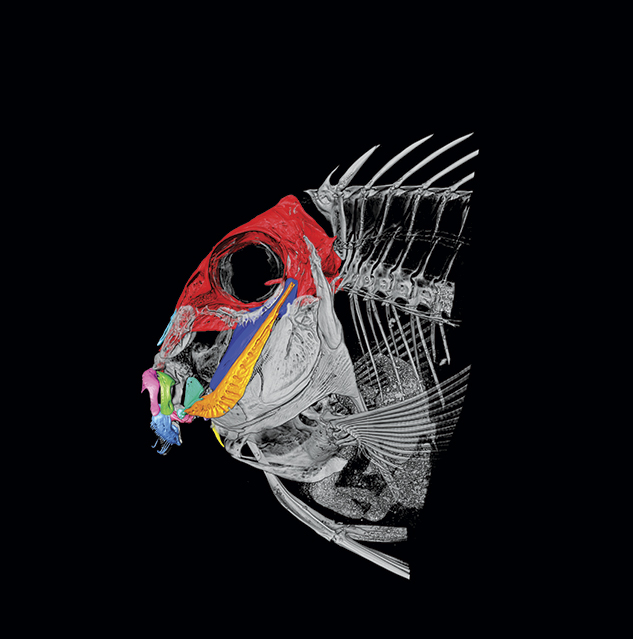 A 3D scan of a surgeonfish with different bones highlighted. Scan by Kory Evans.

Evans does not consider his growth as a scientist to have been an evolutionary cascade, but rather a more gradual journey. “I grew up in North Philadelphia, and there wasn’t too much to do around the neighborhood, but there was a pet store. I used to just go there and stare at fish.” Evans got his own fish tank for the first time when he was grounded at age 14 for failing classes.

“While I was grounded, I wasn’t able to go outside, so I started keeping fish tanks in my room to keep myself sane,” he explained during an interview with Klara Nordén, host of the “Specimen Stories” podcast. “I started taking notes on the fish behavior, and I started mixing and matching fish in the tanks, and it went from one tank in my bedroom to about seven.”

By age 15, he was contemplating a career in marine biology, but he did not know what form that would take. Evans’ passion inspired him to study ecology as an undergraduate, and during graduate school, he began taking an evolutionary approach to many of his ecological questions. “So it was a stepwise process,” he says. “I didn’t wake up one day in high school and say, ‘I want to learn about the evolution and ecology of fishes.’ It was more like, ‘Yo, fish are cool.’”

As the flatfish skull got more and more integrated, more things began to change, per unit time, than a generation before” … which is the hallmark of an evolutionary cascade.

Evans hopes to share this sentiment with both scientists and nonscientists alike. To achieve this goal, Evans has appeared on several blogs and podcasts, and he maintains an active Twitter presence to make his science accessible. “We don’t do science to lock ourselves in a basement and show it to our scientist buddies, all eight of us who care about parrotfish morphology,” he says. More seriously, he adds, “Scientists have a responsibility to communicate our work to the public because if we don’t, the results are catastrophic and because, ultimately, our science belongs to the public.”

Evans loves studying fish for their own sake, but his investigations of the relationship between the environment and evolution deepen our understanding of biology as a whole and belong to all of us. All vertebrates descend from fish, and the terrestrial vertebrates are more closely related to their fish ancestors than some modern groups of fish are to one another. In that sense, Evans says, “You and I are fish, so learning the evolutionary story of fishes can inform our own evolutionary stories.”