By Anthony J. Melchiorri  •  5 months ago

An author and bioengineer explores real-life biomedical advances first imagined in the realm of science fiction. 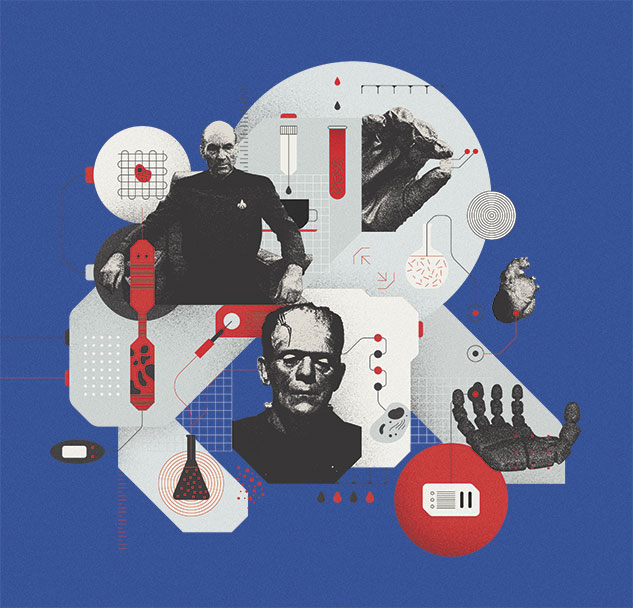 A few computer chirps later and the tea materialized according to the orders of Captain Picard on the USS Enterprise. While “Star Trek” visions of advanced 3D-fabrication tools appear squarely seated in the realm of science fiction, the field of bioengineering has recently been inundated with equally science fiction-worthy claims of organ printing on demand. Bioprinting, the process of using 3D printers to fabricate constructs made with cells and materials compatible with the human body, has become a popular and increasingly useful tool in biomedical research.

We might someday hear a similar command from a doctor in a busy hospital. “Organ, heart, adult male.” And minutes later, a glistening construct of live cells, architecturally sound ventricular walls and a network of blood vessels are ready for implantation. Bioprinting offers the promise of personalized medicine and custom tissues and organs for patients. We could one day theoretically design the geometry of an organ along with its composition of cells, proteins and all the other ingredients that comprise a healthy tissue. This would alleviate the demand on donor organs and tissues, while ensuring new organs are better suited to match the patient’s anatomy and even reduce immune rejection.

Bioprinting offers the promise of personalized medicine and custom tissues and organs for patients.

However, bioprinting has a long way to go before reaching the clinic. While modern-era television shows like “Grey’s Anatomy” would have you believe we can already 3D-print blood vessels in minutes for a real human patient, we are years away from anything quite so miraculous. Researchers have made monumental advances in the field, but reality is a far cry from the depiction of bioprinting in popular culture. Bioprinting is often more arduous, slower and more difficult than the beautifully crafted scenes of artificial beings — “hosts” — being fabricated in HBO’s “Westworld.”

And that’s exactly why we need bioprinting to keep showing up in science fiction. The beginning of modern science fiction literature is often traced back to a fateful bolt of lightning that struck a monster cobbled together from the tissues of the deceased. With that lightning strike, Frankenstein’s monster and the genre were born, thanks to the ingenuity of Mary Shelley.

Science fiction didn’t start by exploring the stars in silver spaceships; it started by exploring the mysteries of the human body. Manipulating genes, tissues and organs is a familiar subject in science fiction. Maybe it arises in a theme park full of dinosaurs resurrected from ancient DNA fragments in Michael Crichton’s “Jurassic Park,” or the prospect of creating replacement living bodies — “sleeves” — to serve as a shell for a transferred human consciousness in Richard K. Morgan’s “Altered Carbon.” In addition to asking important questions — like “Just because we can, should we?” or “What does it mean to be human?” — the scientifically rooted themes threaded through these novels, movies and shows serve another important purpose. They introduce these scientific concepts to others. And with any stroke of luck, they inspire them, too.

Building the Future of Medicine

Housed in Rice’s BioScience Research Collaborative building, the Biomaterials Lab would be right at home in a science fiction novel. It is a core facility home to a wide array of advanced bioprinters, imaging equipment and other instruments that enable advanced biomaterials research. These resources support the work of researchers from Rice and the Houston community in topics ranging from biomimetic models to test cancer therapies to engineered bone and cardiac tissue. 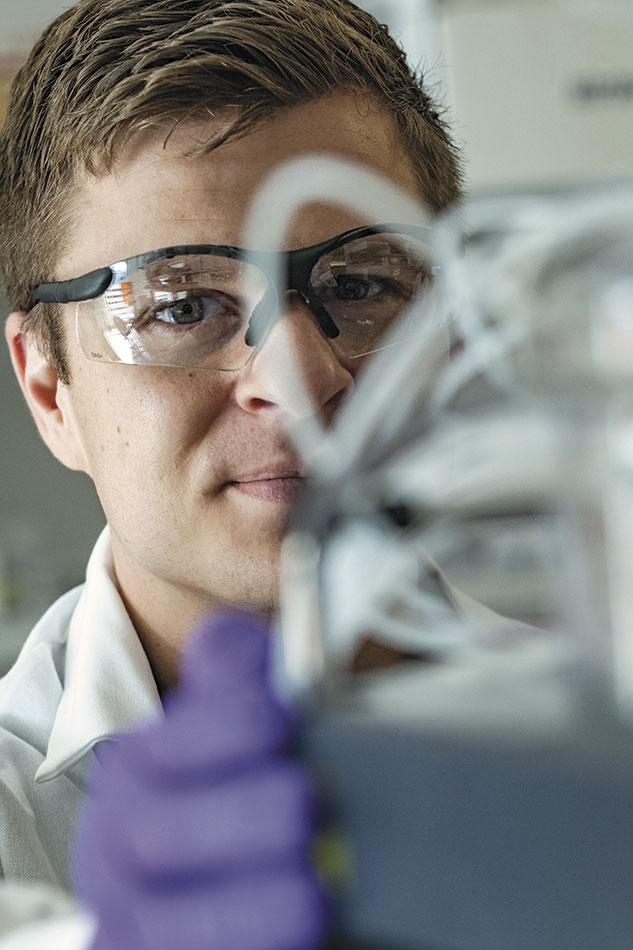 Our lab is also part of a multi-institutional effort, along with the University of Maryland and the Wake Forest Institute for Regenerative Medicine, to lead the National Institutes of Health Center for Engineering Complex Tissues. The primary aim of this national resource center is to help grow the 3D-printing and bioprinting community. Additionally, the Biomaterials Lab supports projects developing bio-inks — bioprinted materials containing cells — with government, university, nonprofit and commercial partners. We are working with these groups to create and commercialize methods and materials that can be used to regenerate healthy tissues for use in the laboratory and clinic. Since our official opening in 2018, we’ve also hosted a number of workshops, lectures, and demonstrations for researchers and the general public alike.

When Jules Verne was writing books such as “Twenty Thousand Leagues Under the Sea,” he often attended academic lectures like the ones our lab hosts. His enthusiasm for scientific research is evident in the “info dumps” and scientific predictions present in his novels. Verne was prodigious at engaging scientists and then relaying what he learned to his audience. But the scientific community and the public shouldn’t have to rely purely on laymen novelists and script writers to propagate the myriad of innovative research topics arising from our academic laboratories.

When Jules Verne was writing books such as “Twenty Thousand Leagues Under the Sea,” he often attended academic lectures like the ones our lab hosts.

Scientists can, of course, write science fiction themselves. Microbiologist Joan Slonczewski is a prolific author who has, unsurprisingly, tackled topics of biology in her works, along with space travel. Space scientist David Brin not only consults with NASA, the CIA and other organizations, but also explores topics including physics and climate change in his novels. Inspired by other scientists and subjects in my field, I’ve enjoyed carrying on this tradition by weaving bioengineering into several of my book series. At the Biomaterials Lab, we strive to make bioprinting topics just as accessible to others as these science fiction greats have. We’re focused not just on the future of biofabrication science, but also the future of biofabrication scientists. 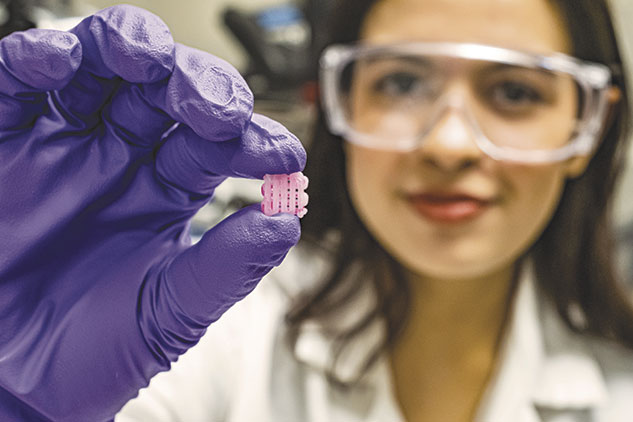 The truth is that the science we do in academic labs is not nearly as inaccessible, cryptic and archaic as it is sometimes depicted in science fiction. For example, the lab hosts an annual internship and boot camp for local high school-aged students. We teach them how to use 3D printers, synthesize biomaterials, perform medical imaging techniques and use mechanical testing equipment to measure the strength of 3D-printed constructs. By the end of the week, the students assembled and tested their own 3D-printed prosthetic hands. Most impressive, they also worked in groups to design and 3D-print osteochondral scaffolds — constructs to support tissue-engineered bone and cartilage for the knee joint — with biomaterials available in the lab.

The truth is that the science we do in academic labs is not nearly as inaccessible, cryptic and archaic as it is sometimes depicted in science fiction.

One student raised his hand near the end of a recent career panel. He told us he had no question, but he was thankful for being introduced to the field of biomaterials and bioprinting. His parents had told him he needed to either become a doctor or a chemical engineer in oil and gas. He was ecstatic to find that there was a middle ground — where an ambitious young researcher could help improve people’s health while also exploring advanced engineering topics. He didn’t realize that bioprinting isn’t just science fiction.

By making science accessible, we’re training the current and next generation of researchers. They can hit the ground running as reality unfolds to more closely resemble science fiction. And we’re going to need them.

We dream of a day when we can print new cartilage to heal our aching knees or a length of bone to replace one that might be missing due to a catastrophic crash or cancer. Maybe we can even print that portal vein for Dr. Grey of “Grey’s Anatomy.” But we still face grand challenges. For example, many bioprinted successes circulating in the media are really just cobbled together cells and materials no larger than a person’s thumb. They don’t quite function or look like the tissues and organs they’re intended to replace. We need to scale up these constructs and increase their complexity to repair a long bone or create a cardiac patch to fix a heart.

Vascularization is also a major roadblock. Any large bioprinted tissue needs an adequate blood supply to keep it alive. Printing resolution is still insufficient and human organs are extraordinarily complicated, comprising an intricate array of extracellular matrix and cells. To truly replicate human physiology, we may have to print at a cell-by-cell level or even smaller, manipulating proteins and other smaller molecules.

But we still face grand challenges. For example, many bioprinted successes circulating in the media are really just cobbled together cells and materials no larger than a person’s thumb.

This past year, researchers using the Biomaterials Lab have accomplished a variety of groundbreaking advances. They developed materials that incorporate natural ceramics that can mimic the bone microenvironment. By selectively 3D printing these ceramics, they can even trick stem cells into acting as if they are in native bone and coaxing them to mineralize a 3D-printed scaffold.

Biomaterials Lab users have also developed ways to print flexible hydrogels — soft materials — while incorporating proteins and other factors that help stem cells embedded in the materials to differentiate into relevant bone cells. They have even used machine learning — another topic widespread in science fiction — to help guide the development of techniques and materials to make 3D-printed bone scaffolds more efficient and accurate. Just as we might 3D-print a bone, fiber by fiber, cell by cell, we are slowly building our way to clinical treatments in that same diligent, methodical manner.

We need to recruit and train the next generation of scientists to make that happen. Facilities and resources like the Biomaterials Lab are the keys to pursue bioprinting advances and, more importantly, provide an outlet where we can share them with others. Places where we can show a high school student who is intrigued by bioprinting thanks to the latest sci-fi flick or TV drama what it actually looks like to be working toward a future where science fiction can finally be fact. That inspired student might someday be the engineer who finally develops the voice-activated replicator that can print a heart with only a vocal command. For now, we’ll continue to explore the future in science fiction and build toward it. Eventually, we can get there.

Anthony J. Melchiorri is the associate director of the Rice Biomaterials Lab.

We asked Melchiorri to recommend works of science fiction that blend advanced technologies with human truths and shine a light on what our own future may hold.

“Nexus” (2012) by Ramez Naam
Naam’s real-world experience in human-computer interfaces comes to life in a thriller packed with excitement and cool technology. The book takes modern-day brain-computer interfaces, such as cochlear implants, to their logical conclusions in a future where biotechnology and computer science merge in a way as inspirational as it is frightening.

“Earth” (1990) by David Brin
The main plot features adept scientists trying to stop an artificial black hole from annihilating Earth. But a backdrop equally rich in technological predictions includes the prevalence of the internet, spam, email and global warming, among other topics that are spot-on for a book written over 30 years ago.

“Severance” (2018) by Ling Ma
While “Severance” might be less technological, it deals with the implications of our technology-focused economy, the fragility of international trade and a raging pandemic. Ma writes an eerily prescient story given the current global situation, even if it is a satirical spin on the plight of millennial workers in a zombielike apocalypse.

“The God Organ” (2014) by Anthony J. Melchiorri
The core technology that sets off a wild conspiracy featuring scientist protagonists is based off an artificial organ genetically programmed to proactively eliminate disease. In a very real way, the tech is similar to modern innovations in CRISPR and genetically engineered immune cells (CAR-T cells).