Students are leading a daily protest at the founder’s statue. 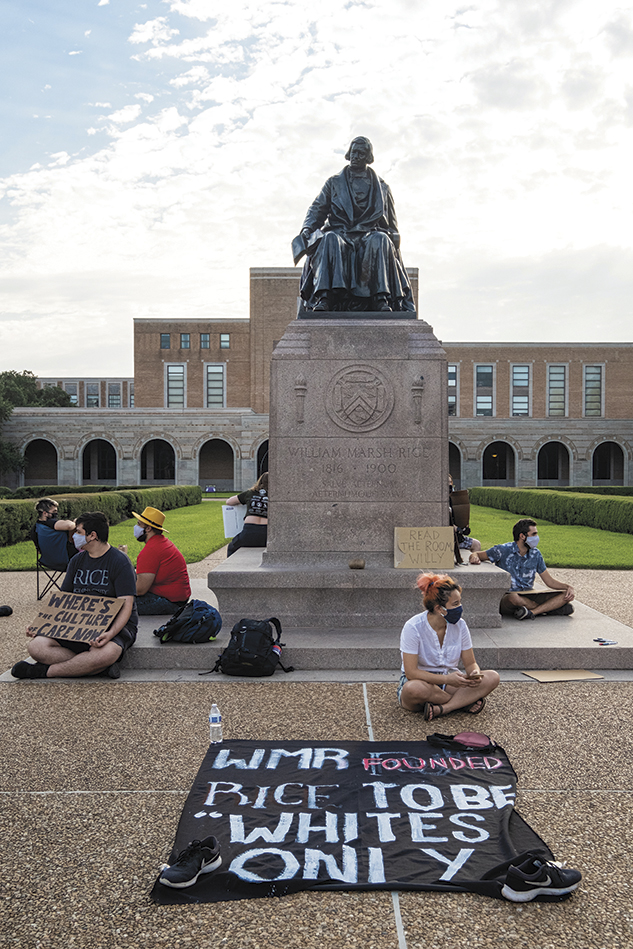 Every day at 6 p.m. since Aug. 31, Shifa Rahman ’22 and classmates have gathered in the Academic Quad to call for the removal of the founder’s statue. Participants sit near the plinth that bears the bronze statue of William Marsh Rice, silently holding up signs such as “Down With Willy” for passersby to see.

Rahman, who came up with the idea as a way to continue the statue protests that started in summer 2020, said, “I didn’t start sitting in because I had a problem with the statue; I started because we had a problem with the statue.” The sit-ins complement a social media campaign that called attention to the way the statue has been cast in university history and marketing. In June, removing the statue from the Academic Quad was a key action item on a list of demands made by Black students to the Rice administration and the focus of a petition started by Gabrielle Falcon ’20.

“During tours of campus, tour guides are instructed to tell the well-known story of Rice’s mystery-book death and how his lawyer friend helped to solve his murder,” Falcon wrote. “What is not told or acknowledged is Rice’s history as a racist enslaver who owned 15 slaves. What is not told is that the money that was used to found Rice University came from wealth earned by Rice’s cotton trading. What is not told is that he served on a slave patrol (aka a slave catcher).”

On the last day of fall semester classes, students again gathered by the statue, displaying hand-painted signs with the names of the 15 individuals enslaved by William Marsh Rice. “Making a move like removing the statue would show Rice’s dedication to Black students’ lives here on campus,” said Angelica Torres ’22.

The protests are a key part of ongoing conversations within Rice’s administrative, campus and alumni communities to examine the university’s past with respect to slavery, segregation and racial injustice. Via historical research, webinars and online group discussions, this process is available to follow at taskforce.rice.edu.