Every two years since 2006, Dan Wallach, Michael Byrne and Robert Stein have combined their back-grounds in computer science, psychology and political science, respectively, to lead a class aimed at demystifying the mechanics of voting and elections in America. 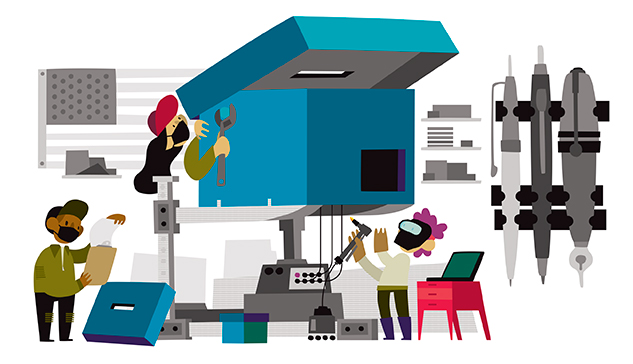 In last fall’s Election Systems course (cross-listed as COMP 435 and PSYC 420), the COVID-19 pandemic and the presidential election added new considerations, such as safety concerns and nationwide partisan division, to class discussions. “The 2020 election season provided a twist on material that we already know, but the dynamics of elections have not radically changed in the past year,” said Wallach, professor of computer science and electrical and computer engineering.

The lectures and discussions, all online, eventually culminated in a final group project, where the students were able to explore any related topic of their choice. Valencia Shuler, a junior at Sid Richardson College, said her group researched the reasons for registration rejections, which was inspired by her own voting experience.

“I wasn’t a registered voter until now because my parents are in the military. We moved so many different times, so the question of my residency was always a challenge,” Shuler said. “Every year at Rice, I always tried to register to vote, and I always got rejected — until this year.”

Mason Reece came into the class with a unique background; he’s a student election judge for Precinct 361. Reece, a junior at Hanszen College, said he values the psychological and technical aspects of voting systems, something he learned more about through this multidisciplinary course. “Each discussion is more of an introduction and a springboard for future research, to entice us rather than to overwhelm us with technical jargon,” Reece said.

An interdisciplinary approach to teaching about elections is actually rare across universities, according to Wallach, but he said it’s something invaluable not only to the students, but to the instructors as well.