By Natalie Danckers  •  4 years ago

Over the past 20 years, food service at Rice has gone from a central kitchen model to one where food is planned, prepared and served at the residential colleges by culinary professionals. Today, they’re dishing up some of the best campus food in the country. Here’s the story behind Rice’s food (r)evolution. 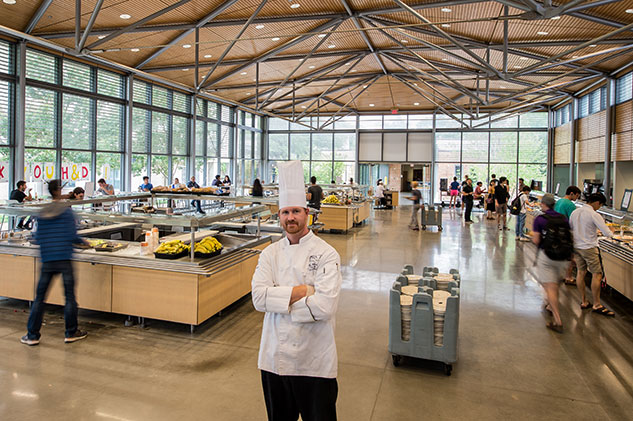 Twenty years ago, Rice dining manager Julie Bogar was sitting in her office when the phone rang and a voice said: “Julie, the pies are on Main Street.” A cherry pie-laden cart had fallen from a Housing and Dining truck en route to a college unit kitchen. In the Central Kitchen era, food was transported from the main kitchen to each college, providing ample opportunity for logistical issues.

Occasionally, Bogar had to use her own car as a means of food transportation. “In the evening before I went home, I would just drive around to all the kitchens in my little Volvo wagon. If a steamer was down, I’d drive the broccoli over to a different college and pop it in the steamer and go back. Every day my car smelled like a different vegetable,” she said.

Now, after moving to a dining model where chefs and their teams create and serve meals in six serveries — South, Sid Richardson, Siebel, Baker, West and North — Rice’s food has been highly ranked by USA Today and Princeton Review. With menu items like chicken Thai coconut soup and beet poke bowls with radish sprouts, it’s unsurprising that more than 90 percent of Rice students are also satisfied with the food. The current servery system’s success, however, came after years of pushback and challenges during the transition. 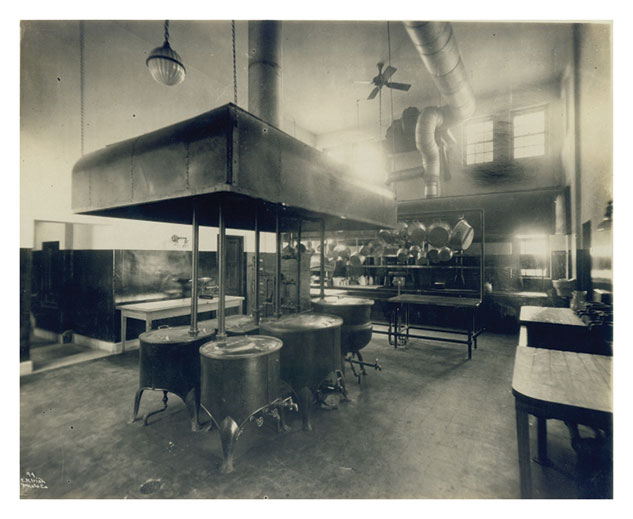 In spring 1988, a Central Kitchen student employee published a guest column in the Rice Thresher. The column outlined the poor quality of food, citing “rancid” meat. Joyce Rubash, food service director at the time, immediately fired the student, but Marion Hicks, the director of Food and Housing, rehired him. Throughout their time at Rice, Rubash and Hicks faced criticism for Central Kitchen’s food quality, health code violations and unresponsiveness to student feedback.

According to Rubash, the issue of food quality came down to what chefs were doing once the food was trucked from Central Kitchen to the unit kitchens. “It’s not poor quality food, it’s just poor quality when it’s served. When it leaves here it’s great,” she said in an interview with KTRU, Rice’s student-run radio station. No matter the initial quality of the food, the transportation process and unsupervised preparation in the unit kitchens produced problematic results.

Since 2010, chefs have enjoyed a close relationship with Rice’s Farmers Market vendors, ordering roughly 25 percent of their ingredients from merchants within a 200-mile radius.

However, complaints from the students were rarely directed at their unit chefs, with whom they had closer relationships. “Central Kitchen was vilified; everybody loved their staff so if there were any issues with the food, it was blamed on Central Kitchen,” said Mark Ditman, current associate vice president for Housing and Dining services.

Ditman came to Rice in 1996 after being recruited to address the students’ complaints. A few years later, he beat out competition to become the new director when Hicks retired. Ditman described the beginning of his time at the university as difficult. “For me, it seemed to get worse every day for two years. It’s hard when you try to act as an agent of change.” One of the most disruptive and difficult changes involved terminating employees who were not positively contributing as kitchen staff members: In the first two years under Ditman, the dining staff changed dramatically. In one case, a chef at Baker was let go for spray painting offensive graffiti on the walls of the kitchen serving area.

Ditman had a long-term vision of improving food quality by giving chefs more autonomy, but this plan required professionally trained culinary personnel. One of the first hires was Chef Ben Fonbuena, who was instrumental in improving kitchen sanitation. Fonbuena, who joined Rice in 1997, was not only a certified executive chef, but also a licensed sanitarian. While restructuring Central Kitchen, he also began a training program for the existing staff. “Ben laid the foundation for our coming success,” said Ditman.

As Chef Ben began his overhaul of kitchen sanitation and safety, Rice hired a consulting firm to address student dissatisfaction with the food. The firm found that “the main impediments to better food are the small size of college kitchens and the small number of people served by each kitchen.” A committee of students and faculty proposed that a joint Wiess-Hanszen servery and other larger facilities would enable kitchens to prepare more food on site, increasing meal quality.

The proposal of a joint servery was met with resistance from faculty members and the vast majority of the student body. Fears ranged from increased tuition to loss of college culture. To engage the student body, Ditman and Bogar attended College Cabinet meetings to introduce ideas to students and alumni and ask for feedback. “One of the things that frightened me was that one student said, ‘I don’t care if the food sucks, just don’t change anything.’ That’s hard to work with,” Ditman recalled.

The town halls were ultimately successful in communicating the potential benefits of shared serveries. “The upside to all those conversations was that considerable care went into designing the system so that it wouldn’t be disruptive to residential college culture,” said Dean John Hutchinson, who was master of Wiess College at the time of the discussions.

Ultimately, the construction of the joint Hanszen-Wiess servery and a new servery in the North colleges went forward with feedback from Rice chefs. “In general, the chefs had a strong hand in developing the kitchens,” said David Rodd, Rice’s staff architect. With the new facilities being built, it became possible for Housing and Dining to implement the servery model. First, however, they would have to put it to the test. 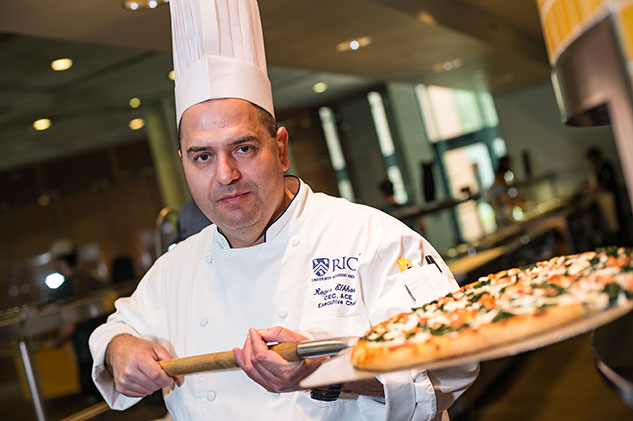 Chef Roger Elkhouri was hired in fall 2000 to work at Brown College’s kitchen. He and his team worked with Central Kitchen for six months before taking full ownership of Brown’s kitchen. The process of independently ordering food and training new staff was relatively simple for Chef Roger — the major issue was that the kitchens were not outfitted for from-scratch meal preparation. “We didn’t have the space or the equipment,” Elkhouri said.

Nevertheless, Chef Roger’s installation was a success. Shortly after he began cooking, the Brown kitchen was so popular that a secret early mealtime for its students had to be instituted. It was clear that with the right staff in place, the servery model could work. The Wiess-Hanszen servery, known as South Servery, began to operate independently from Central Kitchen, and a semester later, North Servery did the same.

“The real issue for us was that South and North serveries were incredibly successful right away, so the challenge was how to maintain a sense of equity for the colleges that weren’t attached to a servery,” Ditman said. Meanwhile, the remaining Central Kitchen-supplied kitchens were outfitted with storage and preparation capabilities. In spring 2001, the Thresher announced that Central Kitchen would be closed the following fall — all meals would be prepared in individual college serveries.

In 2002, a Wall Street Journal reporter came to Rice to review the university’s food. She visited South Servery, where Chef Roger was located at the time. The college food rankings came out a few weeks later: Rice was given the only three-star ranking; only Princeton was ranked higher with four stars. “To us, this symbolized that things had finally turned around,” Ditman said.

Today, the serveries are used for much more than food preparation. For example, Rice offers two cooking-related undergraduate courses: The Chemistry of Cooking and Cooking With Chef Roger. While many institutions offer courses similar to The Chemistry of Cooking, few are taught by a senior executive chef and full-time chemistry professor. Through his course, Chef Roger hopes to teach students the science and technique behind healthy, delicious food. “The two most important things are passion and science. With those, you can do anything,” he said. 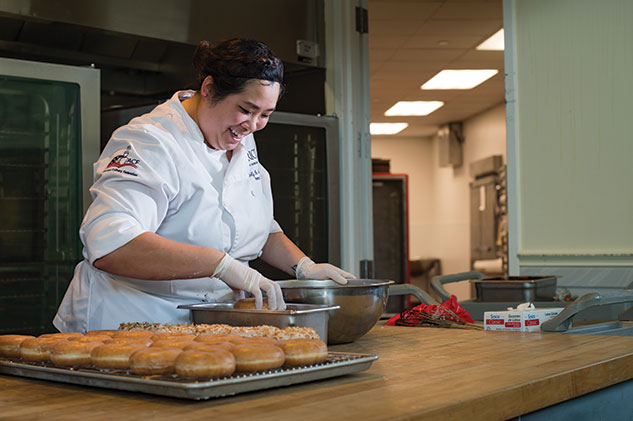 The serveries are also a space for community engagement. Chef Johnny Curet, who is now Rice’s dining director, created an internship program for Houston high school students interested in pursuing a culinary career. The program has benefitted the serveries in more ways than one. “It uplifts the whole group, because the career staff looks and sees the high school students coming in and taking this very seriously. We’ve had several who graduated and came to work for us while going to local culinary schools and some who have gone on to the Culinary Institute of America,” Ditman said.

Additionally, Rice chefs support the community by buying locally. Since 2010, chefs have enjoyed a close relationship with Rice’s Farmers Market vendors, ordering roughly 25 percent of their ingredients from merchants within a 200-mile radius. The serveries feature honey, vegetables and meat, such as free-range bison, from Houston-area farms and ranches. As a result, students enjoy dishes like Chef Kyle Hardwick’s Farmers Market roasted root vegetables.

For those who weren’t at Rice when the kitchens were serving Stouffer’s lasagna as a special meal, it can be difficult to realize how far the meal service has come. “Mark Ditman’s vision changed the quality of dining on campus extraordinarily,” said Hutchinson. “It went from being really difficult to look forward to meals to getting excited to visit the servery to see what the chef has created that day.” Seconds, anyone?