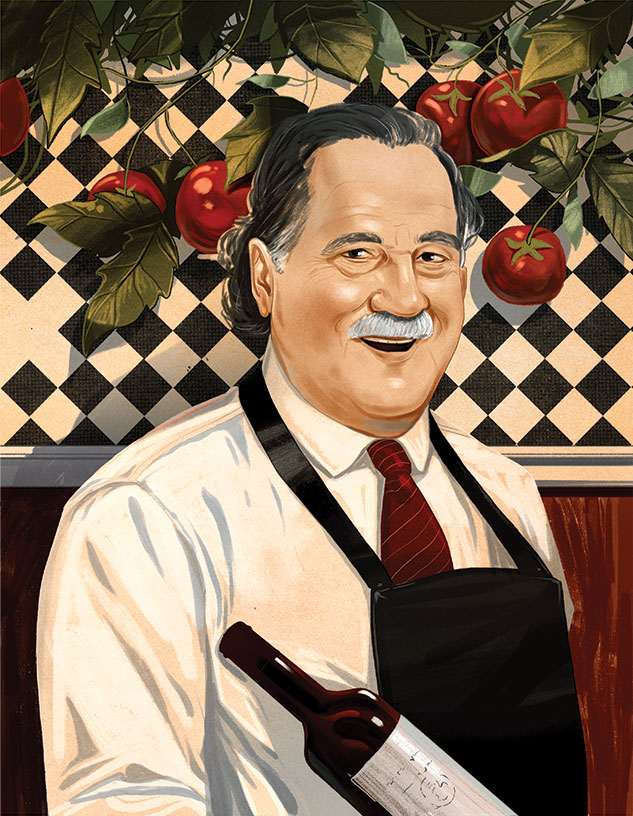 Going out with Frankie B. Mandola ’69 could be an arduous task for those who knew him well.

“When you walked down the street with him or entered a grocery store, he’d start chatting with people. A five-minute visit would stretch into an hour. People just knew him wherever he went,” said Bubba Butera, a cousin and longtime associate.

In his four-decadelong career as a restaurateur in the Bayou City, Mandola owned and operated at least a dozen eateries. He and others in his family have been credited with introducing Italian food into the Texas foodscape.

Mandola, who died last year at age 68, was born into the food business. He grew up in Houston’s East End or Second Ward, part of a large Italian immigrant community. At home, Mandola was raised on the tastes and smells of the distant country his grandparents had left behind. His parents owned a grocery store and meat market, where he worked and hung out with cousins. “There was always a stove in the back of all the stores where the women would cook. Our grandmothers would cook these huge Sunday meals for 50 or 60 people,” he told the Austin Chronicle several years ago.

It is little wonder that Mandola tried to infuse some of these tastes into his menus. At Mandola’s Steak Grill, for instance, people were treated to such unusual combinations as steak pizzaiola, meatball burgers and Italian fried pickles.

In 1983, Frankie Mandola and his cousin Damian opened Damian’s Cucina Italiana. At the time, most Houstonians had never heard of fettucine Alfredo, fried calamari or even eggplant Parmesan. In the more than three decades that followed, Mandola came to be known as much for his food as for his quintessentially Italian traits — an affable personality and a big guffaw to match.

After graduating from Rice, where he played both football and baseball and earned a degree in business, he joined the Army Reserves. In 1974, he and brother Luke Mandola Sr. opened their first restaurant, Ragin’ Cajun Seafood (originally named Ray Hay’s Cajun Poboys). That business famously introduced Houstonians to 6-foot poboys and other Cajun delicacies.

“My father loved food from Louisiana,” said Johnny B. Mandola. “One of my happiest memories from childhood is sitting on barstools at the restaurant with my sisters, and helping Dad assemble the poboys.”

In 1983, Frankie Mandola and his cousin Damian opened Damian’s Cucina Italiana. At the time, most Houstonians had never heard of fettucine Alfredo, fried calamari or even eggplant Parmesan. In the more than three decades that followed, Mandola came to be known as much for his food as for his quintessentially Italian traits — an affable personality and a big guffaw to match.

Among all his creations, Mandola’s favorite was his catering company, because it allowed him to do what he loved most —  interact with people on happy occasions: weddings, tailgates, birthday parties, house parties and so on.

“He loved to show up at events, even after he became famous,” said Robert Martinez, catering director of Mandola’s Catering and Damian’s Cucina Italiana. “He was chef at one party, sous chef at another, front house manager at a third. Wherever there was a void to be filled, he’d fill it.”

Mandola always had a soft spot in his heart for Rice, and especially for Rice Athletics. He once repurposed some AstroTurf that had been pulled from the Rice football stadium as carpeting at Frankie B. Mandola’s Steaks & Burgers on Kirby Drive, which closed in 2003.

“When Rice Athletics approached him for catering, he’d often donate food or sell it at $5 or $10 a plate if they didn’t have the budget. He would say he’d rather lose money than say no to Rice,” Butera said.

After Mandola died, a memorial service in the Grand Hall of Rice Memorial Center included a spread of his favorite dishes from several of his restaurants.

But he’ll be remembered best for the way he lived, not the way he cooked, according to those who knew him best. “For the way he treated people,” said Johnny B. Mandola. “Treat people in your restaurant the way you would in our house. Food is important, but not more than how people feel, he would say.”

This appetizer has been on Damian’s Cucina Italiana menu for 34 years.

Heat clarified butter in a skillet over medium heat; add shrimp, garlic, shallot and lemon zest. Cook for 2 to 3 minutes, then add stock, wine and lemon juice. When liquids have reduced (1 minute), add cold butter, parsley, salt and pepper to taste. When sauce is a creamy consistency, remove from heat and serve.

(Recipe contributed by Johnny B. Mandola.)