Soon after earning her Ph.D. in psychology from Dartmouth College, MIKKI HEBL found herself choosing between jobs at Rice University and Davidson College. “In graduate school, my dream job was Davidson, because it focused on teaching and not research, and I didn’t think I wanted much of a research career,” she said. But Rice turned out to be the perfect fit. Twenty years into a rewarding career as an applied psychologist, Hebl finds that her research enlivens the classroom experience, and vice versa. 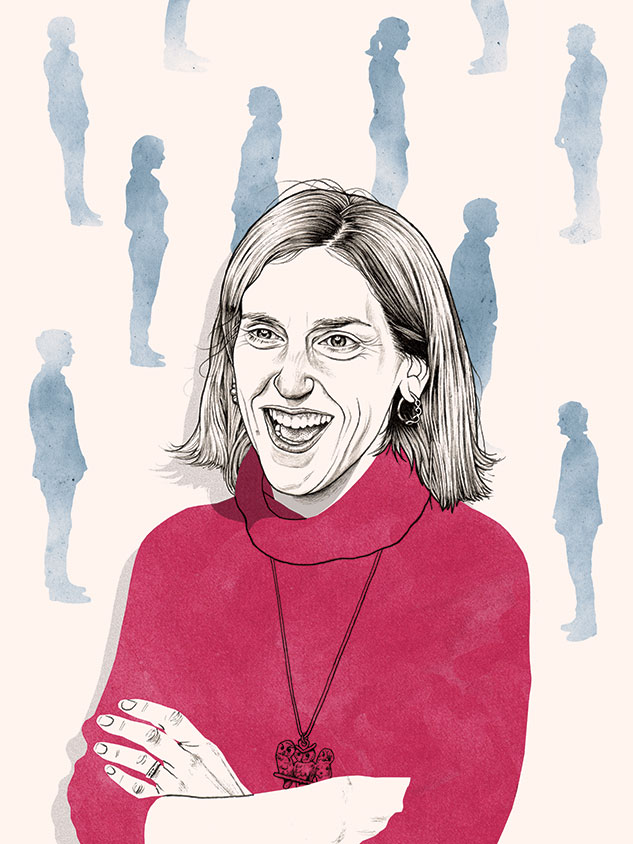 In her study of gender, diversity and discrimination, Hebl and her students mine the subtle, yet pervasive, ways in which people discriminate, as well as how individuals and organizations can remediate discrimination. Because she has received so many George R. Brown teaching awards, Hebl is now part of an exclusive club of Rice professors who are no longer eligible for the honor. A 2016 recipient of the prestigious Robert Foster Cherry Award for Great Teaching, given annually by Baylor University, Hebl just wrapped up a semester teaching in Waco. We caught up with her in her bright and airy Sewall Hall office.

WHAT BEING A FEMINIST MEANS
I’m a feminist. Unabashedly so. I believe that both women and men should be fighting for equal rights for men and women, period. Having gone to Smith College, I was made poignantly aware of how much time and energy female (and male) pioneers invested to give women the modern-day opportunities and rights we have. It is fairly shocking that the World Economic Index rates the U.S. only the 28th best country in the world for rights for women. Men are partners in this, not the losers … a win for women is not a zero-sum win.

FROM PARDEEVILLE TO COLLEGE STATION
It was probably the most shocking to my system when I was going from Pardeeville, Wis., to Smith College, because I left my parents and knew no one. You’re still an adolescent when you’re 17 years old. We didn’t have cell phones. My parents couldn’t afford to bring me home every vacation. It was really very stressful. It was a harder ideological switch for me to go from Smith to studying gender issues in College Station in 1991. And I transferred to Dartmouth to finish my Ph.D. That was a beautiful fit for me.

MENTORING
When I was in my second year of graduate school, I took a class called The Teaching of Psychology. My professor, Dr. Ludy Benjamin, is a well-known historian of psychology, and he gave his students large packets of active learning exercises (learning demonstrations) and suggested that they use them as often as they could in the classroom.

IS IT ME? IS THAT PERSON RUDE OR … PREJUDICED?
With more overt types of discrimination, targets of discrimination can clearly identify that the problem lies outside of themselves. That is, if people say, “I don’t like you because you are ‘X’,” then it becomes clear that this is prejudice, plain and simple. However, if someone displays more subtle discrimination, targets often experience the rudeness, unfriendliness or negative behaviors as ambiguous. They may spend enormous amounts of time and energy trying to figure out intent. “Was the person being rude?” or “Are they prejudiced?” or “Was it something I did?” This thinking can eat up cognitive resources and take attention away from more important things in the interaction — it can be exhausting. The disadvantage created and maintained by these seeming molehills of subtle discrimination can result in mountains of disparity.

ONE POWERFUL WAY TO ADDRESS SUBTLE DISCRIMINATION
There are many strategies we can use. One is to stand up and say, “Hey, I’m one of these people, and when you discriminate, you discriminate against people like me.” Obviously, there’s potential for backlash, but it also identifies that the population is larger than people think. That can be really powerful.

HOW TO BE AN “ALLY”
People we call allies can play an incredibly powerful role in reducing discrimination. In one of my studies, we examined when “confederates” (actors playing the role of research participants) condoned or condemned discrimination and found that unknowing participants were very likely to mimic our actors in both the short- and long-term results. “Majority” or “high status” individuals are particularly good allies as they are better able to persuade other majority members.

HOW ORGANIZATIONS ENACT SOCIAL CHANGE
There are examples of how organizations act as microcosms of society and can direct policies at more national levels. For instance, with respect to LGBT rights, many organizations took it upon themselves to offer same-sex partner benefits or have a zero tolerance LGBT discrimination policy at their institutions. Essentially, then, organizations can help enact social change.

TALES FROM THE ACTIVE LEARNING FILES
If you visit one of my classes, you will note I’m an active learning task devotee.

Active learning tasks keep students’ attention and help them learn better by doing. I might demonstrate how students say they will try, but are actually not willing to try, pickled pig’s feet. I might ask students to repeat a story several times in a row to each other to demonstrate how much their stereotypes influence their memories. Or I might manipulate one student to be “innocent” and one to have “murdered Violent Rose, the partner of Hershel Big Foot, the dance hall Romeo” and ask the students to use law and psychology-related strategies to act as jury members in deciding guilt and innocence. I might ask students to come up with their own active learning tasks and then have them demonstrate, collect data on and publish with them. It’s not just fun and games. You have to set the tone and you have to tell them what they’re going to learn or what you’re trying to do in the exercises.

TEACHING AT BAYLOR AFTER WINNING THE ROBERT FOSTER CHERRY AWARD
This semester I taught at Baylor. Yes, Baylor is a religious institution, so I was amazed at my first faculty meeting when an administrator asked, “Can I get a hallelujah?” and “Can I get an amen?” It’s been a very positive force in making me reflect upon and practice my own faith more. It also encouraged me to step outside the “Rice bubble.” And I think it is critical to my understanding and research to see how other people view diversity and discrimination, too.

In Waco, my family is not with me, so I’m taking in a lot more of the college environment. I’ve been to a basketball game, a theater performance, trivia night at the pub, a religious event and a fraternity-sorority sing-off. Taking part in these Baylor traditions makes me eager to attend more Rice events, especially the ones that make Rice “Rice.” That’s just another way that Baylor has been a gift to me.

MARATHONS IN 50 STATES + SEVEN CONTINENTS = A MARATHONING LIFE
I always say, marathoning is a good metaphor for life. For example, there have been some rough miles — when your baby has colic, when you have unexpected surgeries or when relationships don’t work out the way you expect them to. But these hard miles make you aware of the easy ones — the relationships that do work out, the miracle of children, the ability to walk (or run) a part of life with students, and just the general knowledge that you picked a career that fits pretty darn well with your personality.

A SPIKE IN OVERT DISCRIMINATION
The vitriol present in last year’s election campaign seems to be inspiring (or at least not tempering) a spike in overt discrimination. What I don’t know is whether instances of overt discrimination are just temporarily spiking or if we are seeing a trend in which overtly discriminatory behaviors will continue to increase. What I know for sure is that there is fear — among women, among individuals who are LGBT, among Muslims, among other non-Christians and among many immigrant groups, among Latinos with immigrant relatives and friends.

SEMESTERS AT SEA
Six years ago, I had one of my best summers ever when I was selected as a faculty member for a summer Semester at Sea trip — it was the last time they did a summer voyage. I took my family on the ship for 67 days and sailed to 13 countries in Europe, the Baltic States and Russia. I ran a marathon in Poland with seven students on the trip and won 100 Polish zloty ($33) for winning my age group. I knew I wanted to go back.

When I had an upcoming sabbatical, I re-applied [for Spring 2016] with an idea to turn this voyage into a research experience. So I did nine studies with the students, collecting cross-cultural data. We visited 15 countries in Asia and Africa. I took my kids out of school, and my family was with me a good bit of the time. They saw the sumo wrestling championships, walked the Great Wall of China, visited the Killing Fields of Cambodia, saw religious celebrations on the Ganges River and took a balloon ride over the temples of Bagan, Myanmar. We saw the world. Among the many highlights: In Africa, we sailed with Archbishop Desmond Tutu, saw the infamous Robben Island in South Africa, visited the slave castles of Ghana and completed a marathon (282 laps of the ship) in Morocco.

WHAT KEEPS ME AWAKE
One commonality I saw across the countries during our Semester at Sea travels was the inferior status of women. Whether it was women working in sweatshops, child labor, girls working in the sex trade or the absence of women in the public sphere, I realized that my research and quest to promote gender equity is a critical necessity. It keeps me awake at night. I want to raise the consciousness of the need and the responsibility that we have as human beings to not only improve the equity that exists in the U.S., but also worldwide.

PEOPLE ALWAYS ASK …
“What award are you proudest of?” I can get emotional pretty quickly when asked about Rice students. My husband builds buildings, and I always say I help to build people. I’m proud of how many of them have gone on to academia or into applied settings — how they are carrying the torch of research on discrimination forward. I have helped to produce people who are better researchers, better teachers and better citizens, and I am insanely proud to watch them become superstars. When I leave academia, I know I am very safe with the future generations to whom we are handing over the reins.