Evolutionary biologists at Rice discovered a new wasp species that feeds on other wasps. 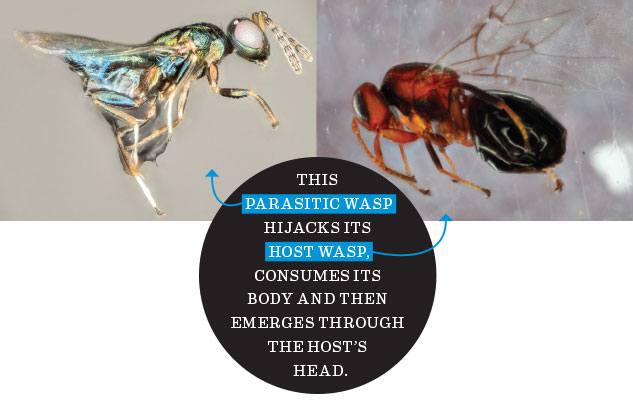 GALL WASPS INFEST OAK TREES for shelter and sustenance, but their wasp enemy has an even more insidious agenda, according to Rice scientists. The wasp known as Euderus set, or E. set, deposits an egg in the developing gall wasp’s woody home. The young E. set eventually chews its way to freedom — through its host’s head.

Rice evolutionary biologists Kelly Weinersmith and Scott Egan recently published their research on the species and its ghoulish survivor skills. The discoverers named their wasp for Set, the Egyptian god of evil and chaos who trapped his brother Osiris in a crypt, killed him and then cut him into little pieces.

The tiny, iridescent parasite hijacks its host, Bassettia pallida, which would normally mature inside the the gall and tunnel its way out to freedom in the spring. A female E. set deposits an egg into the crypt, where it manipulates the growing gall wasp, typically making its emergence hole too small. When the wasp tries to escape, its head lodges in the hole. E. set can then consume the gall wasp’s internal organs and emerge, “alien”-like, from its head case.

Egan originally discovered the wasp on the Gulf Coast of Florida in summer 2014 before finding it in trees at Rice and in an oak tree in his front yard. As part of this study, E. set has now been found in Georgia, Mississippi and Louisiana.

The researchers hope to discover how E. set triggers the change in Bassettia’s behavior. “One hard thing is that we can’t see what’s happening until they come out,” Weinersmith said. “We’re talking to people to see if we can CAT scan the branches in various stages.”

Because close to 600 species in the Eulophid family, which includes these parasitic wasps, are found in North America, and many attack or serve as biocontrol agents for agricultural pests, the researchers would also like to know if E. set’s manipulations are more common. “That’s what I love about parasite manipulation of host behavior,” Weinersmith said. “So many of the stories that have been uncovered are just as cool as the coolest science fiction movie.”

Egan is an assistant professor of ecology and evolutionary biology at Rice. Weinersmith is an adjunct faculty member and the former Huxley Fellow in Ecology and Evolution at Rice. 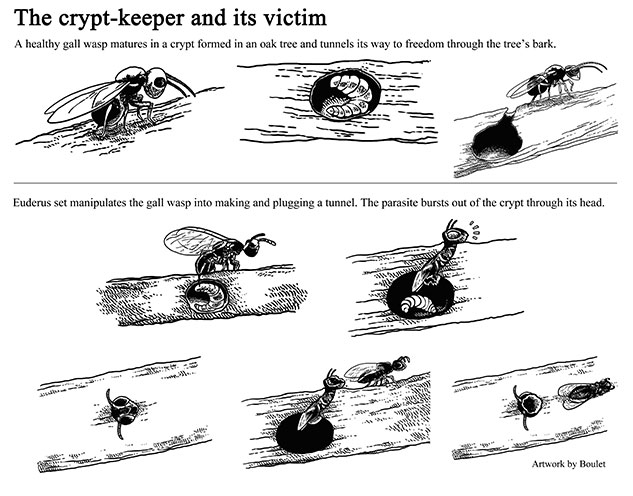