By Kendall Schoemann  •  3 years ago 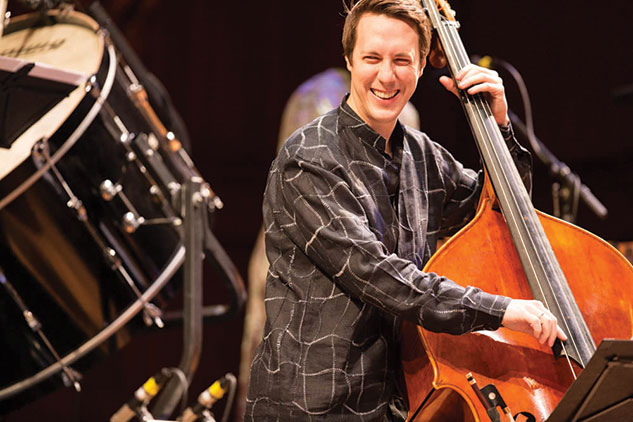 AS A MEMBER OF CELLIST YO-YO MA’S SILK ROAD Ensemble, Shawn Conley ’05 took home a 2017 Grammy Award for “Best World Music Album.” The album, “Sing Me Home” was the seventh released by the famed music collective, which was founded in 2000 to advance global understanding and promote innovation via the arts. The ensemble is made up of performers, composers and singers representing more than 20 countries (and an array of instruments).

A bassist with the ensemble for more than two years, Conley moved to New York City in 2008 after earning his master’s degree in music at the Shepherd School. Initially pursuing a career as a jazz performer, he realized he didn’t want to play just one type of music. He found a community that supports his wide range of musical genre interests in the Silk Road Ensemble. “I didn’t realize how much Rice prepared me for a life of playing all different kinds of music until I talked to people from other institutions,” Conley said. “Professor Paul Ellison encouraged me to be open to whatever excites me, which as someone drawn to all kinds of music, was such an amazing setup.”

“It’s an honor to get to know [the musicians] on every level, from sharing the stage to going out for ramen afterward,” Conley said. “We share a passion for expanding the horizon of everyone’s world outlook.”

Ellison, Rice’s Lynette S. Autry Professor of Double Bass and chair of strings, also encouraged Conley to study in Paris for a year under Francois Rabbath, a Syrian-born musician and mentor. “I love discovering music from people who are from other places,” Conley said.

He is married to Megan Levin Conley ’05, a harpist for the Houston Symphony, whom he met on his first day at the Shepherd School. They split their time between New York City and Houston and are expecting their first child in May.

Capturing Rice University in word and image since 1945. Freelancers welcome.

#Abbott's decision on #refugees "creates a dangerous precedent as other U.S. states may also refuse to accept refugees, leading to a hollowing out of the federal system and a race-to-the-bottom scenario," says the @BakerInstitute's @kelseypnorman. https://news.rice.edu/2020/01/13/abbotts-refugee-refusal-sets-dangerous-precedent-says-baker-institute-expert/ #Texas