Going Gaga Over a Halftime Throw

Going Gaga Over a Halftime Throw

Picture this: you’re standing amid a sea of screaming fans on the field of NRG Stadium, and someone shoves a crystal-encrusted football in your hands. You throw a pass to — who else? — Lady Gaga, and close out one of the most acrobatic halftime performances in Super Bowl history. 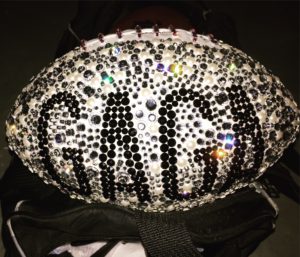 “My pass was the last shot a hundred million people saw before she jumped off the stage,” said Brian Mann, associate athletic director of development for Rice. “Talk about pressure!” Of course, this wasn’t just an ordinary football toss. The football had been “Gaga-ed up,” as Mann puts it – utterly bedazzled with crystals and sequins. “It was heavier and much more slippery than a traditional football,” he said.

“I saw my role in this performance as equivalent to the long snapper in a football game,” Mann said. “If anyone knew my name after the performance, it was a bad thing. Even if I threw a perfect pass and she dropped it, it was still a bad deal for me.” A Boston native and avid Patriots fan, Mann was looking forward to attending Super Bowl LI, not appearing in it. Less than a week before kickoff, he received the unexpected request.

How did this opportunity come up?

The Tuesday before the Super Bowl, the Rice Athletics office received a call from the talent group overseeing the halftime show. They were looking for someone who could throw a football under intense pressure. Because of my football background, the phone was passed to me.

I didn’t receive many details, other than that they were looking for someone who could make the throw, that I’d need to be available for practice every day that week from 3 to 10 p.m., that I wouldn’t be able to watch the game and I wouldn’t be paid. I told them they drove a hard bargain, but I was in!

What is your football background?

I was a quarterback at Dartmouth College and then went into the Arena Football League. I also was a stunt double in the offseason. I played Adam Sandler’s stunt double in “The Longest Yard.”

I first met her the Tuesday I received the phone call. We were at a closed rehearsal with just her dancers and a skeleton crew. She was as sweet as can be. She came right up to me, gave me a hug and asked me about myself.

I instantly admired her extreme work ethic. When she dropped a few balls during our Wednesday practice, she stayed late to practice with me even after her grueling day of rehearsal. That’s the night we found our rhythm. Once she caught the final pass on Wednesday night, she never dropped it again.

Did you refer to her as Lady Gaga?

I didn’t know what to call her! But I did learn that she refers to herself as Gaga and the crew calls her LG.

How hard was it to get the throw to work?

The greatest obstacle was figuring out timing. It was definitely trial and error. When she got to the top of the stairs, she was standing about 12 feet higher, and she couldn’t see me. Because of the stage lights, the only thing she could see about me was the glow from the football. I started making a big motion with the ball before throwing it so she could better see the ball coming.

What was the day of the Super Bowl like for you?

The day of the Super Bowl was surreal. I had to report at 12:30 p.m. and was bussed in with the rest of the volunteers. I was actually able to sneak out onto the field for pregame and hear the National Anthem. We started lining up at the start of the second quarter. I was astonished at how many people it took to create that halftime show. There were 800 volunteers in the performance and another 500 helping with the stage. Because I had my own ticket, I was able to catch the fourth quarter of the game with my family, which turned out to be the most exciting.

What was going through your mind as you geared up to make the throw?

I was nervous. It all happened so incredibly fast. A few minutes before it was time to throw, the foam pit that she would jump into appeared and someone placed the ball in my hands. It was the first time I had held it all day. Ironically, I had one of the best views of the performance. The only people who were closer to the stage were the dancers. I was surrounded by a swarm of excited people. I could see the glow from tens of thousands of cellphones in the stands, there were cords everywhere, the crowd’s energy was insane and just behind me was a line of cameramen flashing their lights.

Describe the moment when she caught the football.

I did a fist pump! I was relieved, excited and pumped for her. She had fought to keep the football toss in the performance. There were talks of taking it out and it was a huge risk to end her performance with, so I was thrilled that it all went off without a hitch.

Were you a big Lady Gaga fan before this? 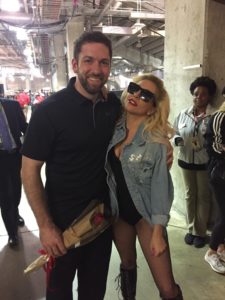 I’ve always really liked her music and admired her talent. However, seeing the way that she interacted with the high school kids on the field gave me a whole new respect for her. Before, I just considered her a great performer, but now I know what an incredibly powerful person she is to a lot of people. She uses that power to empower, to make people feel strong, bold and worthy. Also, she throws around high fives to everyone. How could you not like someone like that?