With a shock of unruly red hair and his trademark thick-rimmed glasses, Chaney is easy to spot. Add oversized headphones, and his DJ persona is complete.

How does a civil engineering graduate find himself in the world of music? “I definitely fell into the music industry,” Chaney said. “I wasn’t the kid who was obsessed with music or had posters of artists plastered on my walls.” 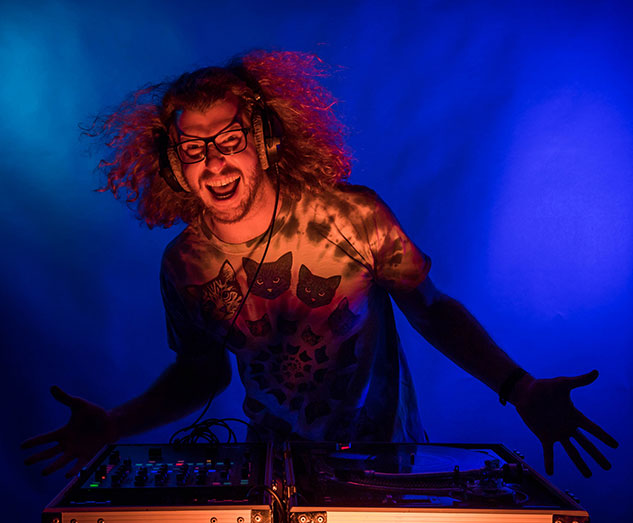 Chaney’s introduction to the DJ world began one night at a not-so-bumping college party at Wiess. Sensing that the get-together would have been livelier with better, louder music, Chaney and his roommate bought a 180-pound subbase and soon became infamous across campus as the duo who blared good music.

As his interest in DJing grew, Chaney started watching YouTube tutorials and learning how to create mashups. He’d test out his mixes at parties and use the crowd’s reaction to guide the night’s selections and fuel his future creations. It didn’t take long before student groups and departments began requesting his services. With each gig, he received a handful of referrals, introducing him to private events, nightclubs and wedding entertainment.

“Even though I was gaining momentum and pursuing DJing with every free moment I had,” Chaney said, “I didn’t think of it as anything more than a hobby I loved. That is, until I was offered a gig on the same day I was registered to take the Principles and Practice of Engineering exam.” Considering it a sign to switch gears, Chaney took the gig but not the test, which is the requirement to become a licensed professional engineer.

After graduating in 2013, Chaney was faced with another decision. He’d earned two decathlon titles in 2012 and 2013 and had a budding DJ business but needed to decide which avenue to take. So he decided to train for the 2016 Olympic trials during the day and devote his nights to music. An injury derailed him from qualifying for Rio, so Chaney’s focus shifted solely to music.

To date, he has released two mashup albums and is working on an album of original work. Creating an original production involves constructing a beat, penning lyrics and collaborating with musicians and vocalists to create a cohesive piece. “Ironically, I use an engineering approach when it comes to building songs,” Chaney said. “Songs are just formulas. I map out every part of a song, from the beat to the chorus, in a giant spreadsheet.”

Despite his continued musical growth, Chaney admits that it can be hard to make it as a DJ. “I live by the motto that you must work hard to put yourself in the best situation possible to make luck happen,” he said. “Just like with sports, there’s always a bit of luck involved, but if you put in the work and the hours, you’ll be ready to seize your opportunity when the time comes.”

Chaney credits little successes with keeping him motivated, like when he was invited to spin at Villanova’s 2016 Final Four pep rally.

While composing music and performing gigs keep him busy, Chaney hopes to become a motivational speaker in the future. “I grew up in the small town of Bellville, Texas. I wasn’t the smartest kid or the most athletic, but I worked hard and landed a scholarship at Rice,” Chaney said. “I didn’t know anything about music when I decided to pursue DJing, but I work hard every day and don’t give up. I think that’s what sets me apart in the industry.”

And for now, Chaney still has no plans to take that engineering exam.