IN 1910, WHEN THE FIRST BRICKS WERE being laid for Lovett Hall, the fledgling Rice campus was little more than a Gulf Coast prairie — a scrubby field flanked by a small grove of oak trees. Salvatore “Tony” Martino, Rice’s first gardener, made it his life’s work to transform that field into the green canopied campus we know today.

Born in Sicily in 1885, Martino left home at the age of 11 to apprentice in Florence as a horticulturist. His next stop was Rome, where his brother — a provincial in the Roman Catholic Church — would help the young Martino get a position as a gardener apprentice in Vatican City. After immigrating to America in 1908, he settled in Houston and took up work as — what else — a professional gardener. 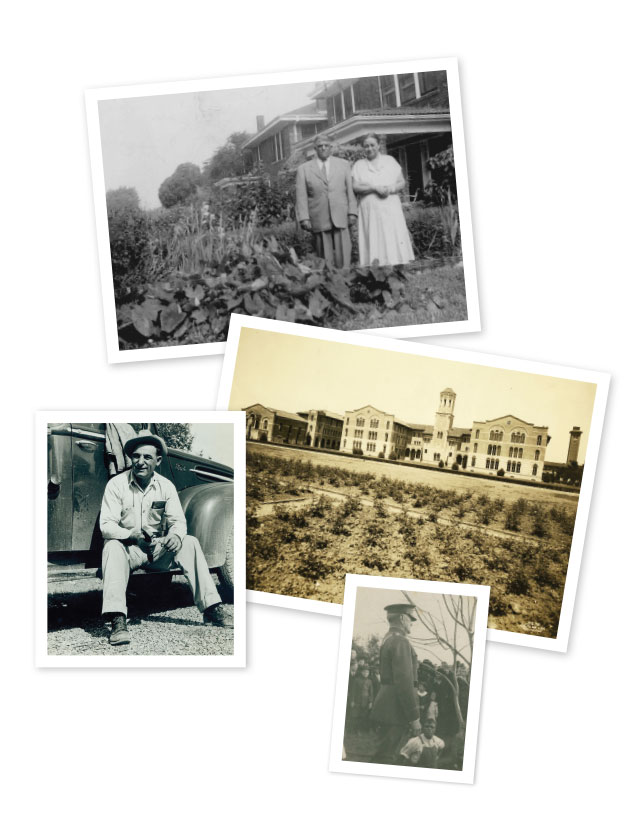 Clockwise from top: Martino with his wife; the rose garden Martino planted in front of the newly completed chemistry building circa 1926; Martino — down in the hole — planting a pecan tree on campus with Gen. John J. Pershing in 1920; Martino in 1949.

One patron of Martino’s green thumb was Capt. James A. Baker. Around 1914, Martino was hired to tend the grounds of the Baker home, where he made an impression as a hard worker. That reputation served Martino well when Baker personally vouched for him in a letter of reference to William Ward Watkin, the first chairman of Rice’s Department of Architecture. He was hired in 1916 and, in his 33-year-long career at Rice, left a living legacy that largely defines the campus experience: sprawling live oaks, blooming bougainvillea and Rice’s trademark hedges. He even became an unofficial mascot of the football team, regularly giving speeches at pep rallies and attending pregame bonfires as the guest of honor.

In 1945, on the eve of Martino’s 30th anniversary at Rice, the Rice Thresher featured an article about his status as a beloved campus figure:

Tony Martino, rotund head gardener of Rice, will complete thirty years in that office next August. During that time he has become as much a part of Rice tradition as the Campanile Tower or the Rice Fight Song. A familiar figure to all students, although unknown to some few of the uninstructed slimes, Tony — how many know he has a last name? — makes his rounds, supervising all the myriad tasks that are part of keeping the Rice campus a thing of beauty and a joy forever.

No building carries his name; instead, the mark left by Martino as Rice’s first gardener spans the entirety of campus — the singular vision of a man dedicated to cultivating beauty.