Relax, study or stare at the live oaks on a Charles Renfro-designed bench in the Rice School of Architecture’s courtyard. 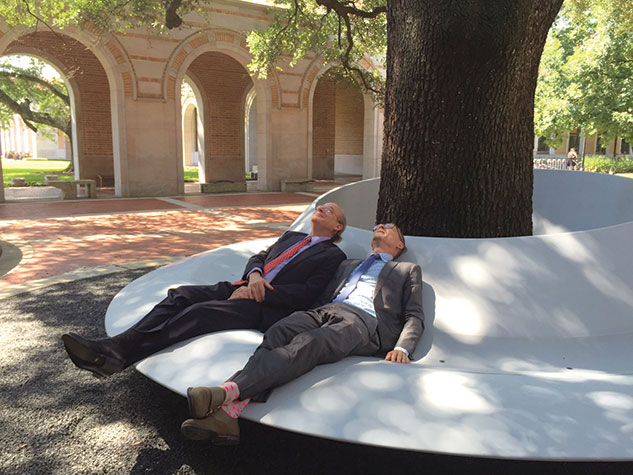 David Leebron and Charles Renfro ’89 kick back on the SI and Susie Morris Lounge. Photo by Tami Lynn Andrew

CHARLES RENFRO ’89 WANTS YOU TO KNOW that the SI and Susie Morris Lounge is in Susie Morris Blue. “She picked the color of the bench! Literally, it’s the paint color in her living room,” Renfro, the architect, said.

It’s a detail only a select few will notice while sitting at the lounge, which was dedicated in the courtyard at the Rice School of Architecture’s Anderson Hall Sept. 1. But to Renfro, to Rice President David Leebron and to everyone at RSA, the details really matter.

The unveiling of the lounge completes a journey for the five Morris siblings — Peter, David, John, Maria Barlow and Laura Walls. Their father, the late Seth Irwin “SI” Morris ’35, was a longtime Houston architect whose love for Rice never waned. Nor did it for their mother, Susie, a Wellesley College alumna who died Aug. 19 but was deeply involved in the project that carries her name.

Renfro, a principal at Diller Scofidio + Renfro, said he was delighted to donate his time and talent to RSA for the labor of love. The lounge is a bench, but with so much more going for it than that simple description implies.

“Lie back, all you see are the branches of the tree,” Renfro said of his favorite spot. “It’s kind of experimental. It’s a very simple-looking form, but actually it’s fairly complex. There’s structural engineering and a great deal of craft.”

He described the lounge as a monocoque structure, with its load supported by its external skin. There are minimal steel supports for the four legs, placed carefully to avoid the tree’s root system. The bulk consists of high-density, milled foam covered in fiberglass and finished with resin.

“We wanted to keep the scale of it in line with the base of the building,” Renfro said. “It aligns with the limestone base that goes around the courtyard, and of course it’s a riff on the circular cutout for the tree itself, as if the stone surround had kind of lifted up and become the bench.”

Leebron noted that Edgar Odell Lovett, Rice’s first president, paid great attention to detail as he oversaw the creation of the university more than a century ago. “What was important for Lovett was not just that sense of large functionality …It was down to the details of the campus that can help support and inform what the university is about and what it inspires people to do in those spaces,” he said.