A Parliament of Election Experts

A Parliament of Election Experts 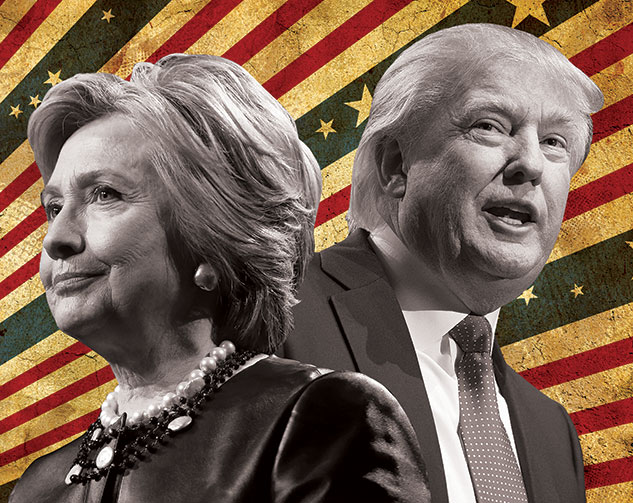 These days, just about the only thing Democrats and Republicans seem to agree on is that the 2016 presidential election has been one of the most consequential in American history. To counterbalance the partisan rancor, media outlets often turn to academic scholars to provide data and research-based analysis. We asked nine Rice faculty members — experts in fields as diverse as presidential history, political behavior, electronic voting security and international relations — to comment on this historically contentious election season.*We’ll update these statements to include thoughts on the election results after Nov. 8.

ROBERT STEIN
Stein is the Lena Gohlman Fox Professor of Political Science and an expert on public policy and voting behavior. He has been involved in local and state polling for 38 years. This fall, he’s co-teaching the undergraduate course Elections and Voting Behavior with Dan Wallach and Michael Byrne.

The best predictor of an election is who people think is going to win. Why? Because people hang around people like themselves. They may not tell you what they’re going to do, but they’re happy to tell you what everyone else like them is doing. The big issue is whether the base turns out, and particularly what happens to the Republican base. I think they are much more vulnerable to defections than the Democrats are. When you have John Kasich on the left of the Republican party saying he can’t vote for [Trump] and Ted Cruz on the right of the Republican Party providing a weak endorsement, that tells you a lot. Hillary Clinton has problems with her base — a lot of them don’t trust her — but not as many problems as Trump.

MARK JONES
Jones is the Joseph D. Jamail Chair in Latin American Studies, a fellow in political science at the Baker Institute for Public Policy and an expert on voter ID laws.

We have almost no cases of proven voter impersonation fraud, with the caveat that in the past nobody has really investigated voter impersonation fraud. It’s probably not zero cases, but it’s likely a very trivial number and certainly has not affected the outcome of an election. In Texas, the battle over voter ID laws goes back to 2011, when the state’s voter ID law was passed over the unified opposition of Texas Democrats. It was a very important issue to many Republican grassroots activists, who play a major role in Texas politics. At the same time, Republicans viewed it as an electoral reform that would benefit candidates around the state by modestly reducing the proportion of Democratic-aligned voters.

In the presidential election Donald Trump surprised academics, pundits, pollsters and pretty much everyone else by effectively running the table in the key battleground states and crashing through large portions of Hillary Clinton’s blue firewall. In contrast, in Texas the surprises were few and far between.

Trump handily defeated Clinton in the Lone Star State, 52% to 43%. Trump’s 9 point margin of victory was smaller than the 16 and 12 point margins obtained by Mitt Romney (2012) and John McCain (2008), but at the same time signaled that Texas Democrats still have a long road to travel if they hope to turn Texas purple, let alone blue. Coming into 2016, Texas Republicans had won 121 consecutive statewide races dating back to 1996, with the last statewide Democratic victory in 1994. On Nov. 8 the GOP winning streak was extended to 129.

The 2016 election did not alter the partisan balance of power in the Texas Legislature nor in the state’s U.S. House delegation. The Texas Senate will continue to have the same 20 to 11 Republican majority it had over the past two years. Democrats succeeded in ousting the four most vulnerable GOP representatives, but Republicans still hold a substantial 95 to 55 Texas House majority. Republicans also retained CD-23, the state’s one (out of 36) competitive U.S. House district. After a hard-fought battle and over $15 million dollars expended, Congressman Will Hurd (R-San Antonio) narrowly defeated former congressman Pete Gallego (D-Alpine), leaving the delegation’s partisan composition unchanged with 25 Republicans and 11 Democrats.

One bright spot for Democrats was the party’s complete sweep of every single countywide office in play in Harris County (the third most populous county in nation). Texas Democrats in need of a morale boost could also look southwest of Houston where Clinton became the first Democrat to win Fort Bend County since 1976.

MICHAEL BYRNE
Byrne is a professor of psychology and an expert in human-computer interactions.

We don’t know if any American elections have been affected by hacking, but we do know that elections have been affected by bad ballot design. The classic example is the 2000 presidential election in Florida, where Al Gore lost by a couple hundred votes. A bad ballot design in Palm Beach County led thousands of people to vote for Pat Buchanan instead of Al Gore. And it turns out, that kind of thing happens with some regularity. That’s the most famous one, because it turned a presidential election, but it also happens in congressional and state and local races. I research how we can design voting systems so that the intent in the voter’s head gets appropriately recorded. Security is really important, but if what you’re securing is bad data, it doesn’t even matter.

DOUGLAS BRINKLEY
Brinkley is a professor of history, a fellow at the Baker Institute for Public Policy, CNN’s presidential historian and the author of numerous books.

When you study presidential history, you learn how important mastering the media of the moment is — think of the way Franklin Roosevelt was able to use radio, or John F. Kennedy used television or Bill Clinton played saxophone on “The Arsenio Hall Show.” Donald Trump’s ability to use Twitter, and his ability to leapfrog over the media culture by attracting so many internet followers, is really an important skill. I’ve never seen somebody like Trump, who is able to take the media tool of the moment, in this case Twitter, and at any minute directly convey his thoughts to his very large cult following.

American presidential elections have always been extremely negative and extremely personal — it’s just that there are more weapons at the candidates’ disposal now than there used to be. If you think back to the earliest negative campaigning with John Adams and Thomas Jefferson, a letter was written, it was put in a newspaper and people in a particular city read that. Whereas now, it’s a 140-character attack that instantly goes around the world. This is the first full-blown social media election we’ve had.

Four aspects of the Trump presidency are emerging from the election. First, Trump will be the premier social media president. While Obama used social media, Trump is defining himself, as he did during the campaign, by social media. His statements on Twitter are unfiltered by the press which must play catch up. But social media is also likely to box Trump in if he continues to make false statements and attack individuals. The tweets becomes the story rather than the policy or personnel decisions he is attempting and he will look increasingly less presidential.   Second, Trump’s inexperience in Washington, touted as a virtue during the campaign, will now haunt him. All presidents face a clock which ticks loudly and runs fast during their first months in office. They have very little time to get a lot done. Presidents with no experience particularly on Capitol Hill face a steep learning curve and typically falter because they take much longer than members of Congress, even from their own party, are willing to give them before the honeymoon is over. This will be especially true for Trump who has pent-up demand among Republicans in Congress who also want to get all kinds of legislation passed—their way.   Third, Trump’s braggadocio—a hallmark of his campaign and his business career—will quickly wear thin on the international stage. As much as Trump wants to shake up world affairs, other leaders around the world will be more than willing to shake up Trump. Finally, Trump is decidedly a minority president who lost the popular vote by a sizable margin and who many people fear. This will make it more difficult for him to accomplish his goals in the initial months of his presidency.   His use of Twitter and mass rallies will not help in his approach to public communication because both have been tools of division and not unity.

JOHN ALFORD
Alford is a professor of political science and an expert in the biological and evolutionary basis of political behavior.

One of the things that’s unique about American politics is that people have two very strong emotional forces in their voting preferences. One is ideology, which is very deep-seated and has strong emotional content. But voters also have very strong partisan attachments — a sort of team-based, “my guys versus the other guys” mentality. Historically in America, ideology and party identity haven’t always overlapped — after the Civil War, you had very conservative, white Southern Democrats and very liberal Northern Democrats. Now ideology and party identity are almost identical, and that’s one of the reasons we have such a polarized electorate.

DAN WALLACH
Wallach is a professor of computer science and an expert in electronic voting security. He testified in Congress earlier this year about the infiltration of Illinois and Arizona’s voter registration systems, which has been attributed to Russian hackers.

The threats [posed by hackers] are credible, so the name of the game between now and the election is contingency planning. There’s not enough time to make major changes, but there are minor things we can do to get ready and prepare. One of the things I’m very worried about is the registration databases. Those are online, so they’re relatively accessible to hackers. What if a hacker simply destroyed the voter registration database altogether? So the state election authorities need to have good backups in place. And in battleground states, I’d like to see states hiring security consultants to audit the websites and make sure the data is secure.

PAUL BRACE
Brace is the Clarence L. Carter Professor of Political Science and an expert on the American presidency.

Somebody like Trump running for president from the outside, with no political experience, is not unprecedented, even in the 20th century. Herbert Hoover, while he had been Secretary of Commerce and run the U.S. Food Administration during World War I, hadn’t held elected office, and he went straight to the presidency. Wendell Willkie in 1940, who ran as a Republican, had no government experience at all. He was an attorney. So having neophytes coming into the political process isn’t completely unprecedented. As far as someone capitalizing on their media celebrity to go into politics, there’s Reagan, but of course he was the governor of California before running for president.

TONY PAYAN
Payan is the Françoise and Edward Djerejian Fellow for Mexican Studies and director of the Mexico Center at the Baker Institute for Public Policy.

Hillary has hardly mentioned Mexico, but Trump has found Mexico an easy whipping boy. Mexico’s image in America has always been contradictory. It’s been portrayed as a paradise, where Americans go and enjoy themselves on the beaches, and then it’s been portrayed as the refuge of scoundrels and criminals or as a dangerous and corrupt place. More recently, since NAFTA, it’s been portrayed as a place that has stripped Americans of their jobs. When Ross Perot was running in 1992 he made NAFTA a sort of bogeyman, and it’s a bogeyman for Trump as well. Obviously, all of this raises the level of anxiety in Mexico — the Mexican people are in suspense, waiting to see what’s going to happen.