When the baseball season ends, Rice Owls flock to collegiate leagues around the country, including the nation’s oldest — the Cape Cod Summer League. What’s it like to play ball in this storied community, where nightly games draw locals, tourists and scouts alike, and the fields are cooled by ocean breezes? 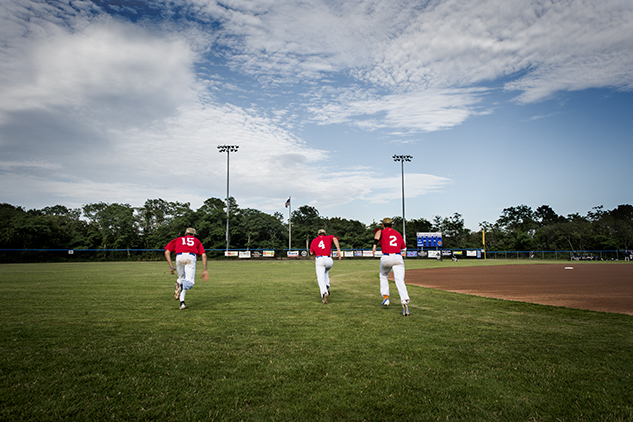 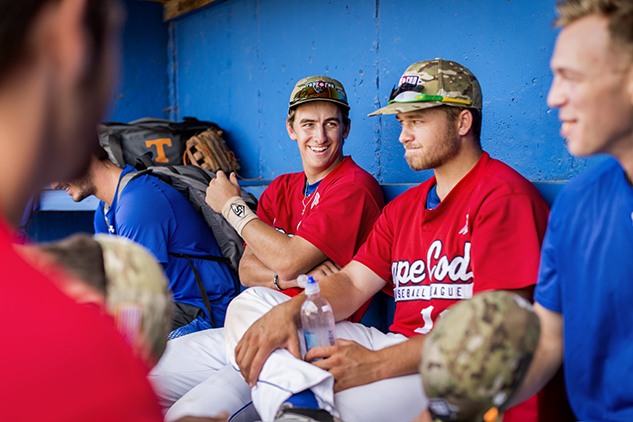 WHEN FORD PROCTOR WAKES UP, HE’S THINKING ABOUT BASEBALL. HE CAN’T HELP IT.

The sophomore is one of this year’s breakout stars in the Cape Cod Baseball League (CCBL), the 131-year-old amateur league that brings the best college players together each summer.

Sometimes he’s dissecting his previous night’s performance, an at bat that didn’t go well, or an inning in which everything fell into place and, with a satisfying crack, he sent a ball sailing far into the outfield. Other times, he’s thinking about the dozens of things he has to do before that night’s game — workouts, batting practice, assignments for a summer course he’s taking.

Playing in the Cape League means living baseball 24 hours a day for 10 weeks. For Proctor, summer in the Cape entails balancing the magnificent with the mundane: playing nightly under the watchful eye of major league scouts and signing autographs for fans young and old, while also enduring long bus rides to away games through the Cape’s infamous summer traffic and remembering to let his host mom, Barbara Scalzi, know if he needs anything at the grocery store.

It makes for long days, Proctor says, but long days make for better ballplayers. “When you’re facing good competition, you can only get better,” he says. “And playing every day, you get a lot of repetition, and that helps.” 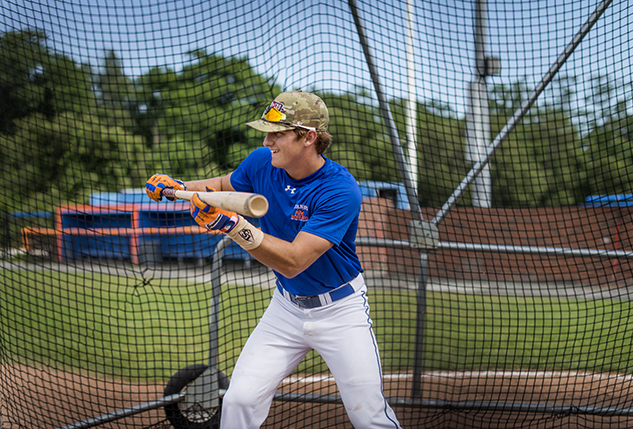 Or, as Barbara (Proctor affectionately calls her “Miss Barb”), puts it, “Baseball’s not the life I thought. I used to think it was all Johnny Damon and Big Papi [David Ortiz]. But when you see these kids … it’s a lot of work, a lot of bus rides.”

Proctor and fellow Owls Ryan Chandler ’18 and Tristan Gray ’18 are the latest Rice players to venture from Texas to the coast of Massachusetts for the Cape League. A summer in the Cape often acts as a prologue to a professional baseball career: as of 2015, 1,100 Cape League alums were playing at all levels of professional baseball, with 292 on major league rosters. It’s a place where baseball’s past and future brush up against each other, and players like Proctor develop a deeper appreciation for the mental stamina and physical work it takes to succeed. 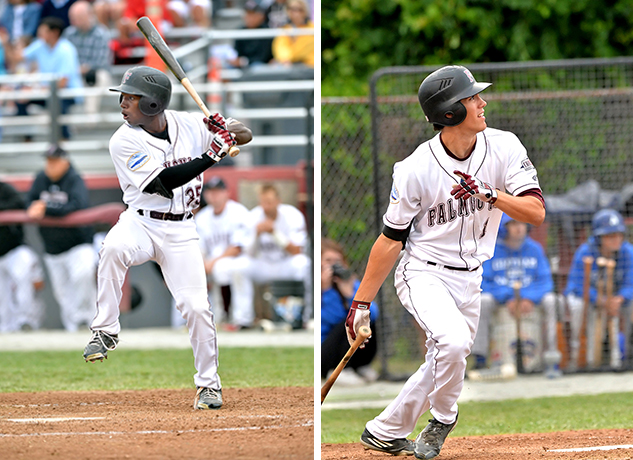 Ryan Chandler ’18 (left) and Tristan Gray ’18 at bat for the Falmouth Commodore. Photo by Sportspix

That’s all icing on the cake for Proctor, though. It’s nothing but baseball on the beach, all day, every day, for two and a half months. What could be better?

Baseball runs in Proctor’s family. His brother, Anthony Fazio ’11, was a Rice baseball letterman. His father played college ball; so did his uncle and two of his brothers-in-law. It’s been a part of his life ever since he could “pick up a bat or throw a ball,” Proctor says. “It became a part of me. It’s something I’ve always done.” 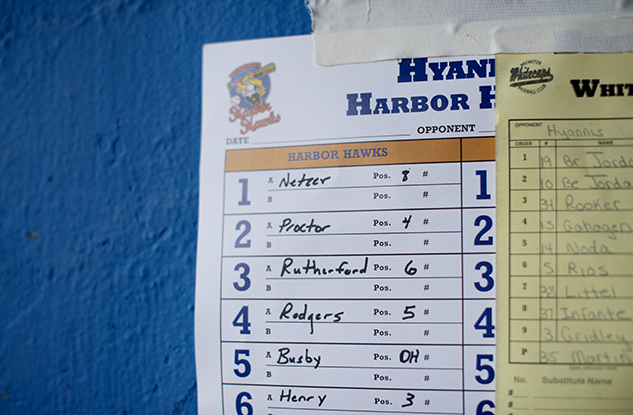 His first game was a T-ball match at the YMCA in Beaumont. Proctor was 3 or 4 years old, already well versed in the game’s mechanics thanks to tossing a ball around with his dad. He remembers how small the field was and how bright orange plastic fencing bordered the outfield. “I’ve got no idea how I did,” he says, laughing. “When I think about it now, I would have loved to have seen it.”

However, Proctor’s college career has been well documented. His 2016 season with the Owls ended with a host of accolades, including five college baseball publications naming him to their freshman All-America teams. He’s kept that streak up in the Cape League, where, as of mid-July, he had the 10th-highest batting average.

But Proctor tries not to think about success too much. During dinner one night, Barbara’s husband, Jim, casually mentioned that Proctor and Zach Rutherford (his roommate at the Scalzis’) had some of the highest batting averages in the league. Later, Proctor said to him, “Mr. Jim, just please say I’ve got the worst average in the league.” 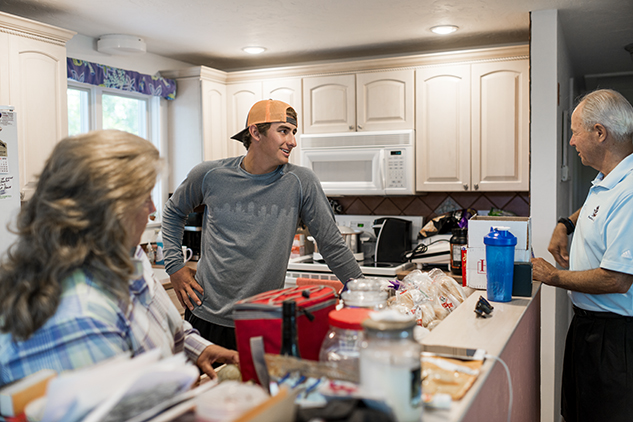 Proctor with his host family, Barbara and Jim Scalzi.

Baseball is a game of numbers, and Proctor thinks about each at bat in those terms. “There are times when you’re going to struggle, when you play 47 games, so I just stick with my approach, staying focused and confident,” Proctor says. But even then, he pauses and reconsiders. “I shouldn’t say confident. More like, relaxed. That I can depend on my game.” 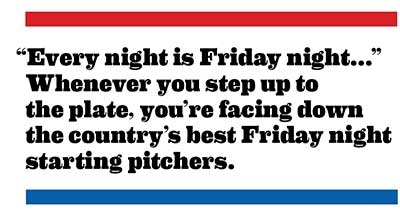 The Cape League is an incubator for that mind-set. Jim and Barbara Scalzi have been a host family for the Hyannis Harbor Hawks (Proctor’s team) since 2010. They’ve welcomed 13 Cape League players into their home in Centerville in the last six years; more than a few have gone on to pro careers, and almost all stay in touch, sending the Scalzis photos, birthday videos and wedding invitations. What struck them most about Proctor were his manners (“He says, ‘Yes sir,’ or ‘Yes ma’am,’” Barbara says) and his easygoing attitude. 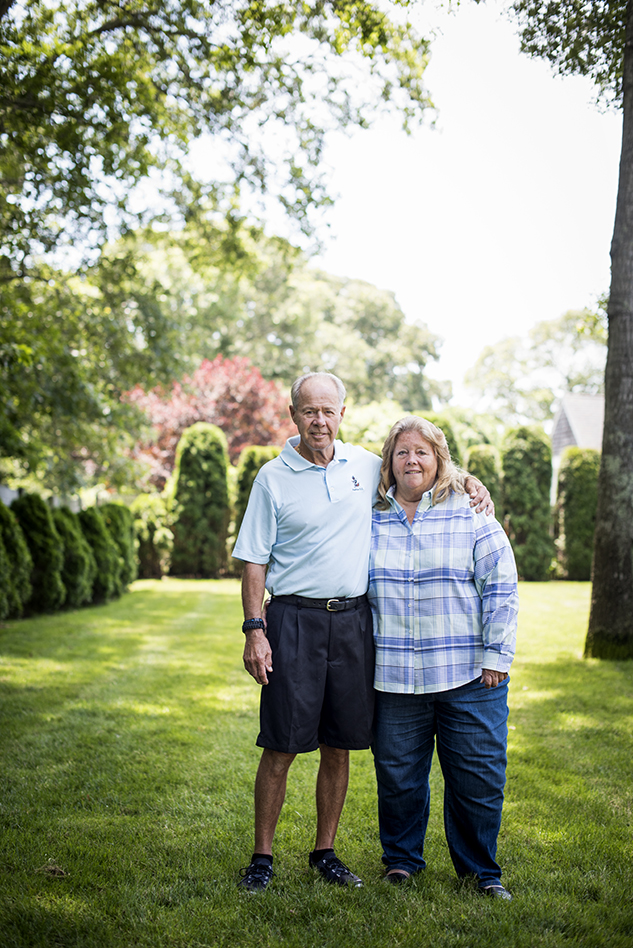 “He’s got a good sense of humor, even about baseball,” Barbara says. “The way I look at it, the scouts here know you’re good. You wouldn’t be here if you weren’t. They’re here to look at personalities, how you handle yourself and the disappointments.”

For 10 weeks, Cape players learn how to play ball on and off the field. The league’s 10 teams have deep roots in the local communities. Players march in Fourth of July parades and visit schools and nursing homes. Before and after a game, it’s not unusual to see fans of all ages lining up to get game balls and programs autographed. It’s the sort of place where, during batting practice, a player can forget their sunglasses on the bleachers only to have them returned an hour later by a fan who knew exactly to whom they belonged. 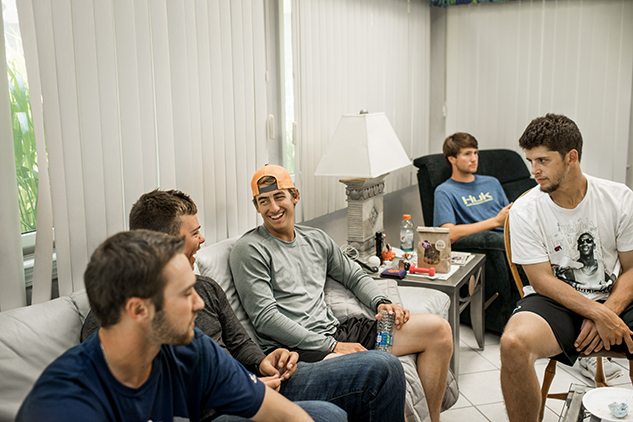 Proctor spends downtime hanging out with friends from the league.

For the players, it’s all a bit magical. If he’s got a little free time in the afternoon, Proctor likes to play a round of mini golf to help unwind before a game. Players get one day off each week, which leaves them time to hit the beach, go fishing, or visit with friends and family. And for the host families, it’s bittersweet. They watch the players grow more comfortable out on the field and catch a glimpse of the futures they might have.

EVERY NIGHT IS FRIDAY NIGHT

There’s a saying about Cape League games: “Every night is Friday night.” As Proctor explains, it means that whenever you step up to the plate, you’re facing down the country’s best Friday night starting pitchers. Baseball is as much mental as it is physical, and the preparation starts when players hit the field for batting practice three hours before the game. 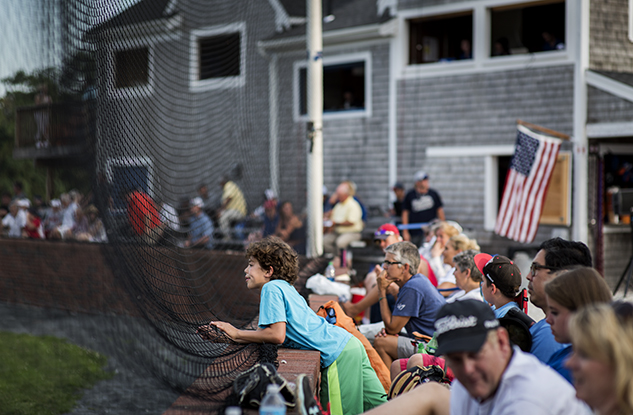 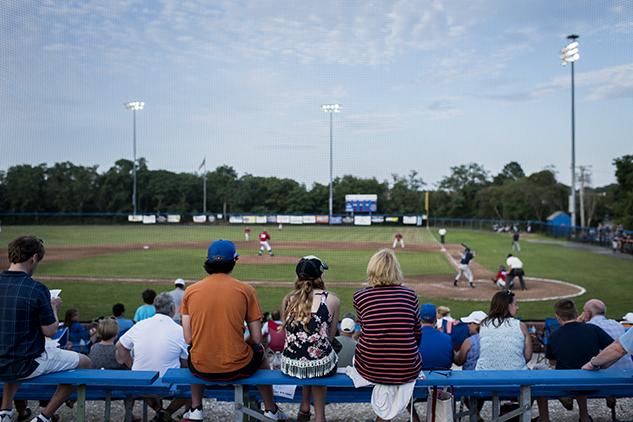 “I try to see my at bat before I get in the box. But here, a lot of people know the guys on the mound, so you can talk about what (the pitcher) does and who he is,” Proctor says. “When you do well, it’s very rewarding, but you also know you’re not always going to do well. It’s a game of failure. As a hitter, you fail more than you succeed. It’s really a mental grind.”

On a cold Saturday afternoon in early July, Chandler and Gray, both on the Falmouth Commodores, hustled out onto Guv Fuller Field in Falmouth, Mass., for batting practice.

“Playing here, it’s easy to not feel the pressure,” says Gray, a shortstop. “It’s not like during the college season, when you’re thinking, ‘I’ve got to win this game.’ It is about that, but it’s about learning how to compete and have fun while competing.” 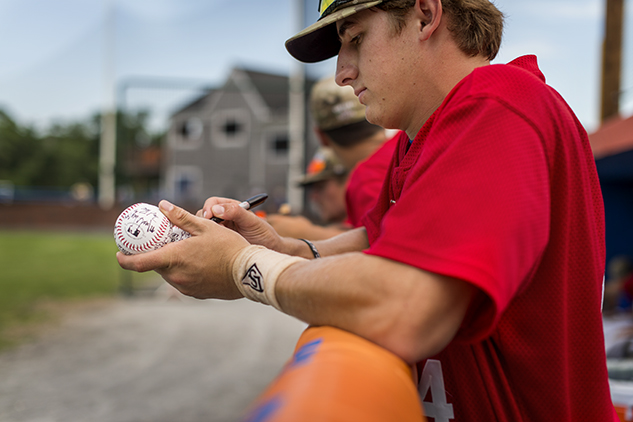 Baseball is also a game of patience — waiting for the right pitch, divining the exact moment to steal second. And with nearly a regular season’s worth of games packed into 10 weeks, it’s also a game of mindfulness, of letting the past go in favor of the present.

“Mentally, it’s all about taking each day one day at a time,” says Chandler, a center fielder. “You have to forget about what you did the day before because it’s baseball. You just go out there with a clear state of mind.”

Having games six days a week helps with that, Gray says. “It’s a lot different to go from having four days off between games to trying to be your best six days into it, when your body’s aching.” 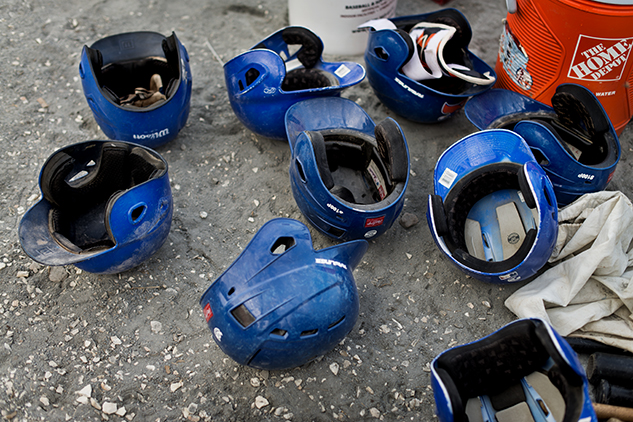 THINKING ABOUT THE FUTURE

For many Cape players, that patience pays off. Rice alumnus David Aardsma ’03 played on the Falmouth Commodores in 2002 — and he credits that summer with making him a first-round MLB draft pick by the San Francisco Giants in 2003.

“It’s the first time you really get put on a big stage … and you find out where you really stand with real hitters and real wooden bats,” says Aardsma, who was recently named to the CCBL’s Hall of Fame. “It gave me the confidence that I could be an excellent pitcher and put it in my mind that I can do this and be really successful.”

Baseball players are, by nature, superstitious, and when asked if they’re thinking about the scouts in the stands at each game or a future in the majors, Proctor, Chandler and Gray don’t want to talk about it.

“It’s tough to make it to the big leagues,” says Proctor, who’s majoring in sport management and minoring in business. “There’s a reason only so many get to say they’ve made it.”

Chandler agrees. “You try not to think about it. But it’s obviously in the back of your head.” 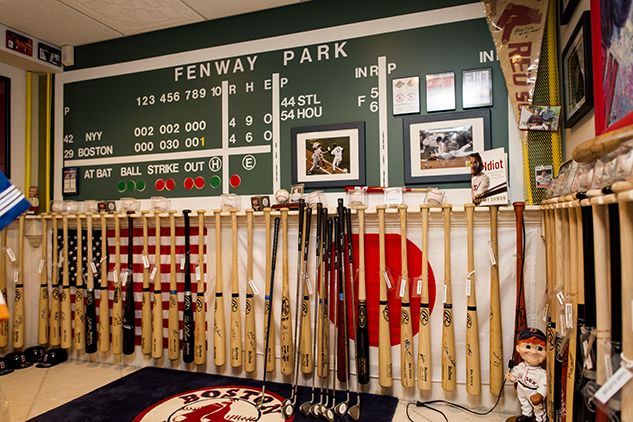 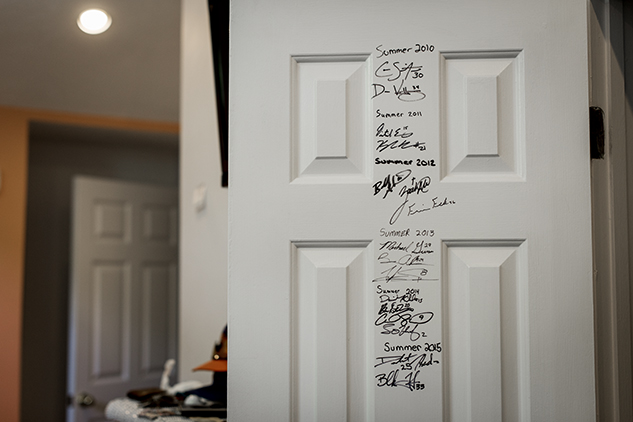 The Scalzis have each of their visiting players sign a bedroom door in the house.

Jim Scalzi, at least, is definitely thinking about Proctor’s chances. The Scalzis have each of their visiting players sign a bedroom door in the house. In the basement, Jim has what he modestly calls a “baseball room.” It’s more like a shrine to the game, and, in particular, to the Boston Red Sox, his hometown team. The finished basement is temperature controlled, with two rooms full of signed bats, balls, jerseys, catcher’s masks and other memorabilia. One wall is lined with bats signed by Cape League players, some of whom lived with the Scalzis, and some whom Jim watched at the games. They’re players he “took a hunch on,” he says, ones he thought were destined for big careers in professional baseball.

Those hunches, he says, have often been proven right. When he’s asked if he’ll have Proctor sign a bat before he leaves the Cape at the end of the summer, Jim doesn’t hesitate. “Absolutely.” 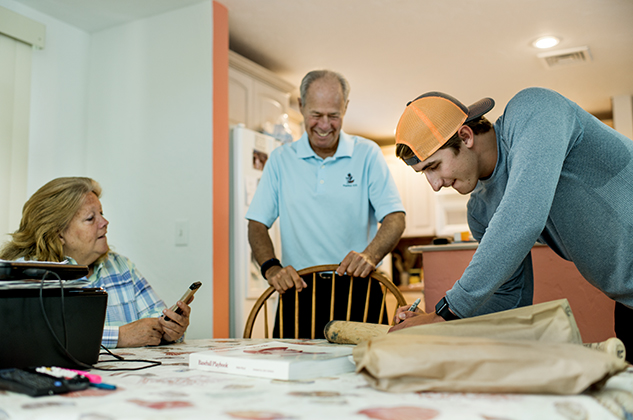