A series that profiles Owls whose work takes flight at night 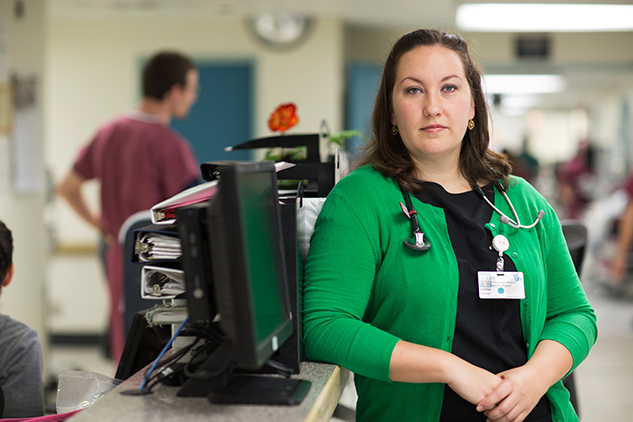 IT’S SAFE TO SAY ANDI TENNER ’01 isn’t stuck in a daily routine. Her days vary so much that she has a hard time even making dinner plans. “The only thing that’s typical about my schedule is that it’s always atypical,”she said.

Tenner is an emergency physician who fits in medical trips to Africa and elsewhere in addition to around-the-clock shifts at San Francisco General Hospital. As a specialist in health systems, tropical infectious disease and humanitarian crisis response, she sometimes finds herself jetting out of the country to work, making up for lost night shifts when she returns.

As an academic emergency physician and global health fellowship director at the University of California at San Francisco, Tenner writes grants, mentors residents and medical students, serves on a disaster committee and works up to 21 emergency department shifts a month in San Francisco’s only Level 1 trauma center — many of them nights.

After one recent shift, Tenner exercised with a trainer; drove to UCSF, while on the phone with a nonprofit; attended a meeting; bought groceries; met with a resident she’s mentoring, then with a university global-health group; and slept just under two hours. Then she went back to the emergency department for her next shift. The next morning, she caught three hours of sleep before heading to two meetings and a graduation ceremony.

“It is pretty rare that I get eight hours of sleep in a day, but I think my body has gotten used to that. Or I’ve convinced myself that my body’s used to it,” she added. It’s been key, she said, to remain flexible and to bring her own happiness to the sometimes grim job.

That’s her schedule stateside, but Tenner is also overseas a lot.

In the last few years, she has traveled to Ghana, Rwanda, Nigeria and the Democratic Republic of Congo — the latter while speaking fluent French — to help improve emergency care. Last year, Tenner ran an Ebola isolation unit in Sierra Leone, then waited out quarantine in Switzerland. These days, she’s also deputy director of the UCSF World Health Organization technical group; her job involves developing tools to teach emergency medicine all over the world.

The trips can be humbling. In Tanzania, for instance, she planned to teach hospital doctors how to manage patients early in the course of their illness or injury, as an emergency physician learns to do in the U.S. But the country isn’t set up for that: its health system requires that patients with an emergency go first to a clinic.

“Oftentimes we [were] seeing patients days after their injury,” she said. “It’s not what I expected based on my experience in U.S. emergency medicine.”

Ironically, most of her night work happens closer to home. Abroad, she’s usually working office hours: “It’s one of the few times that I know that I will be awake during the day and asleep at night.”

Back home, nights in the San Francisco emergency room can be brutal. “The night shifts are rough because that’s when a lot of the violence happens — shootings, stabbings and assaults,” she said. “Usually when I am seeing somebody, it’s one of the worst days of their life.”

And yet, with fewer people in the emergency department at night than during the day, it can be easier to focus on the main goal, Tenner said: “Everybody is there for the patient.”

There can be light moments, too. She recalls one patient being awakened by two nurses cheerfully helping him get ready to go home. They sang “Wake Me Up Before You Go-Go” to him, as he cracked a smile after his rough night.

Even the rough times can bring unexpected solidarity.

“[The recent massacre in] Orlando — that is every emergency physician’s fear, that you come onto a shift like that. But it’s also what you’re there for,” she said. “Part of the reason we do this job is to be there for people when things like that happen.

“The next night after Orlando, our night nurses sent a bunch of pizzas to the night shift in Orlando,” she said. “It’s just showing support. Every emergency medicine practitioner knows that that could be them one day.”