An Ergonomist and an Athlete

By Jenny West Rozelle  •  2 weeks ago

An Ergonomist and an Athlete

Having notched her first Olympic competition, javelin powerhouse Ariana Ince is stretching her Olympic dreams to include Paris in 2024. 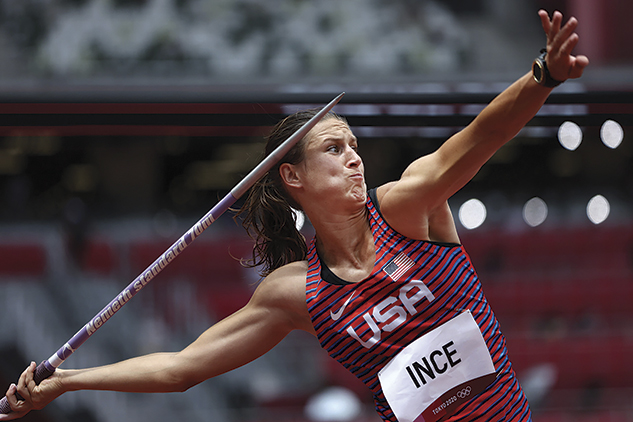 It’s no surprise to anyone who knows Ariana “Ari” Ince ’11 that she is now an Olympian.

“I always knew that I was capable of making it to the Olympics. I’ve been consistently plugging away at it and getting a little bit better every year, and I’ve been motivated to see what my physical capabilities are. And maybe I’m a little bit stubborn,” she said with a laugh.

The Gonzales, Texas, native competed in the qualification round of the women’s javelin throw Aug. 3, 2021, during the postponed 2020 Tokyo Olympics. Although her distance of 54.98 meters did not qualify for a place in the finals, she maintains high hopes for the future. Her goal is to compete in the World Athletics Championships in 2022 and 2023 then go to her second Olympics in 2024 — this time in Paris. “I’ve already got the joke in my head that I’m going to put the ‘Ari’ in ‘Paris,’” she said.

Ince’s primary sport while at Rice was the pole vault — she won the indoor and outdoor Conference USA (C-USA) titles in 2009, 2010 and 2011. Her coaches also began entering her into javelin competitions during her sophomore year, but because she had no javelin training, her initial competition results were frustrating to her. Ince knew she could do better.

During fall of her senior year, her coaches started training her in both javelin and pole vault, and it made all the difference. That spring, Ince placed second in the javelin throw in the C-USA 2011 Outdoor Championships. Her new passion was cemented. Since then, she has competed in numerous international championships and is ranked one of the top 25 women’s javelin throwers in the world.

In addition to a six-day-per-week training schedule at the Chula Vista Elite Athlete Training Center in Southern California, Ince works full time as an ergonomist with California’s State Compensation Insurance Fund and is owner and president of m-erg, an ergonomic consulting firm based in Houston.

Training and competing during a pandemic has carried its own challenges. In the months leading up to the Olympic Games, Ince rarely left the immediate area of the training center. Similarly, she wasn’t able to see much of Tokyo during the Olympics, and “there was a lot less interaction with people from other countries because of COVID-19.” Still, Ince was excited to get to compete in her sport while surrounded by friends. “The strangest part was how normal it felt, like a regular track meet,” she said. “Obviously everyone is really incredible. You’ve got every country there at the same time. One of our physical therapists said it’s the only place where world peace actually exists.”

Even through her Olympic training, Rice has remained an influence in her life. “At other schools, you’re a student-athlete. At Rice, you’re a student, period. Athlete, period. You’re two separate things at the same time. I think that’s a very important distinction. That helped me realize that I’m not ‘an athlete who works.’ I am an ergonomist. I am an athlete. Not a mishmash of two different things, because that implies that you’re not doing either of them well. I’m giving 100% to both.”