Vivian Ho in her own words 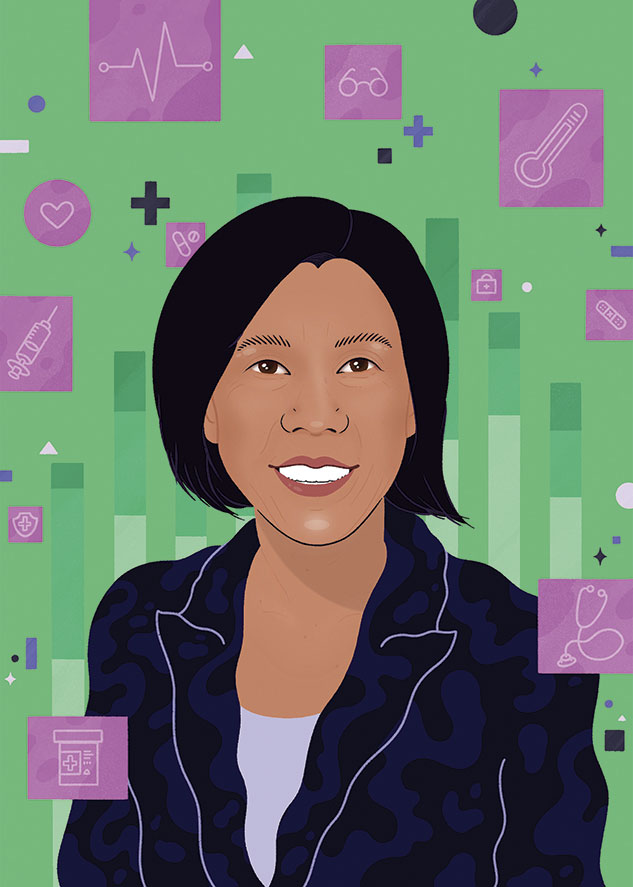 Vivian Ho is an energetic advocate for better health care. She’s the James A. Baker III Institute Chair in Health Economics, a professor of economics and director of the Baker Institute’s Center for Health and Biosciences. Just across the street from campus, she is a professor of medicine at Baylor College of Medicine. Last fall, Ho was elected to the National Academy of Medicine. Not captured in these titles is her ability to engage and educate lay audiences about the health care systems we all rely on — where they fall short and how they can be improved. During the pandemic, realizing she had “better information than most people,” Ho started publishing weekly summaries of what she was learning via clinical and trade journals, as well as social media and personal contacts. It was, she said, “the best thing I could do to contribute.”

When I First Heard About COVID-19

It astounds me that there were experts who, the minute they knew what was going on in China, knew that it was coming here but had no voice. Instead, all I remember at the start, and even remember repeating to my husband, was, “Oh, I heard on the news that it’s just like the flu.” And then realizing, “No, it’s not like the flu. It’s more like a game of Russian roulette.” For the majority of the people, it might be like the flu, but for a small but significant portion of the population, you could become severely ill or die.

There were so many questions about how this virus is spreading. Who is it affecting first? It seemed that the Centers for Disease Control and Prevention (CDC) was collecting lots of information via case reports and questionnaires. Some news outlets, like The New York Times, were reporting on that data. So, I thought, I really want access to this data. I emailed the Times reporter and learned they received the data via an emergency Freedom of Information Act request. I asked Baker Botts for pro bono help in submitting the same, and we heard back almost immediately. In August 2020, the CDC sent my research team all the COVID-19 case report information that they had at that time. We had everything through mid-July — close to 2 million case report records.

At first, we were so excited! When we opened up the datasets, it turned out most of the fields were empty. In other words, there was a great intention to collect data, but most of these case reports came back with very little information. You could know in which state the positive case was recorded and you can have a date, a gender and an age. In many cases, that was about it. You couldn’t get a good picture for the entire nation. We managed to get a picture for a few states. One characteristic we could see in states was that a good portion of the spread was happening in the workplace.

Before all attention was focused on the pandemic, we were dealing with rising health care costs. Health care spending is out of control and that’s therefore pushed up health insurance premiums. Those problems haven’t gone away, and they’re just as bad.

The CDC should create a uniform case report, which would be adopted by allpublic health entities in the entire country. If we’d had better data because of uniform case reporting, we would have been able to quantify, for example, how safe it was to fly and which workplaces were the most dangerous. And we would have been much better in terms of figuring out the right times to quarantine.

[My co-researchers and I] found that if you had a severe lockdown, it was at first correlated with high rates of death. And that’s believable, because when state policymakers see a lot of damage, they respond to it, and they impose severe lockdowns. But then, those lockdowns actually have a benefit in terms of reducing the number of COVID-19 cases. The earliest actions are going to have the greatest benefits many months down the road.

We did find that the more severe lockdowns also led to more unemployment. On the other hand, what we could not prove is how much a severe lockdown actually forced shops to close, which therefore meant that businesses had to furlough their employees. It’s possible that higher unemployment was instead due to lingering fear well after states imposed strict lockdowns. Even if it might be safe to go out and about your business, some people choose to continue to stay home and never engage in any economic activity outside of the home.

Before all attention was focused on the pandemic, we were dealing with rising health care costs. Health care spending is out of control, and that’s therefore pushed up health insurance premiums. Those problems haven’t gone away, and they’re just as bad. Texas still has the highest rate of uninsured patients, and our state legislature is not willing to pass a Medicaid expansion. We have low-income workers who have been without jobs, and they’re trying to get jobs, but they also don’t have health insurance coverage.

The Promise of Virtual Health Care

On the promising side, we’ve got telemedicine. A lot of people have figured out how to use Zoom, and so I’m really hoping it reduces the need for unnecessary visits to emergency rooms. Before, we were trying to say, “Oh, maybe we could get these physicians clinics to stay open 24 hours a day,” and that just wasn’t going to happen. I think it’s much easier to conceive of 24-hours-a-day telemedicine for emergencies — when not sure what to do. And so that could reduce costs, and I’m quite hopeful about that.

This Is the Way

Between research, media requests and online teaching last year, there weren’t many breaks, but I tried to watch a bit of TV, and the more unrealistic the better. My son and I enjoyed watching “The Mandalorian” and “WandaVision” together. Maybe I’ll be able to have a more normal work schedule this time next year.