As an engineer, educator and leader, Gilda Barabino is driven to create opportunities in science.

To say Gilda Barabino ’86 wears a lot of hats is a gross understatement — she’s more like a one-woman haberdashery. After earning her Ph.D. in chemical engineering at Rice, Barabino has held professorships at four different major universities, conducted groundbreaking research on sickle cell disease, and served in a number of vice provost positions and a deanship, all while winning dozens of professional awards and sitting on committees at several scientific organizations.

“I’ve always had tons of different things going on, but there’s a common goal to all of them,” she says. “The big driver in my career has been, ‘How do you open doors for others, especially in underserved and marginalized groups?’” 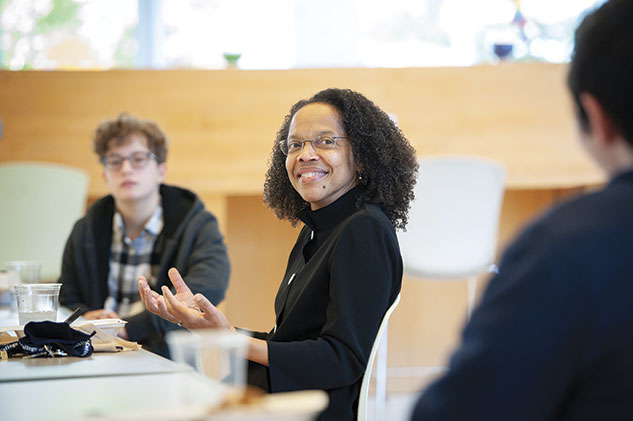 That desire has shaped every facet of her work. As an engineer, she’s published more than 40 papers on the biomechanics of sickle cell disease, a painful blood disorder that disproportionately affects African Americans. As an educator, she founded the National Institute for Faculty Equity, co-founded the National Science Foundation Minority Faculty Development Workshop and served as Georgia Tech’s first vice provost for academic diversity. Likewise, in her professional capacity, she’s a member of the National Science Foundation’s Committee on Equal Opportunities in Science and Engineering and the National Academies’ Roundtable on Black Men and Women in Science, Engineering and Medicine.

“The big driver in my career has been, ‘How do you open doors for others, especially in underserved and marginalized groups?’

Being constantly on the go comes naturally, says Barabino. In her down time — if you can call it that — she’s taken piano, painting and ballet lessons. She’s played in a women’s soccer league and is currently learning Spanish. To some extent, those interests help her balance out long hours at work. But the true source of her boundless energy, she says, is a deep focus on making the world a more just, equitable and humane place.

“I apply that equity lens to everything I do. It’s a unifying thread that allows me to connect, integrate and leverage activities as an educator, researcher, administrator and leader in higher education,” she says. “I’m excited by a challenge, and my commitment to equity and fairness serves as a powerful inner driver.”

Barabino’s latest role has continued this trend. In July 2020, she was hired as the second president of Olin College, a small and prestigious engineering school outside of Boston, where she’s also a professor of biomedical engineering. In 2021, Barabino was named president-elect of the American Association for the Advancement of Science (AAAS), one of the most well-regarded scientific organizations in the country. In both of those positions, Barabino says she hopes to foster meaningful change, not only for the field of engineering, but also for underrepresented communities worldwide.

“One of the biggest problems facing the world today is inequality. There are inequities that play out in education, in health, in welfare, and they can often feel intractable and unsolvable. As engineers, we’re trained to take a systems approach to any problem — so what if we use that mindset to focus on solutions to those problems?” To that end, Barabino sees her work at Olin and the AAAS as important opportunities to address systemic racism in the sciences and to guide students and professionals toward tackling real-world societal issues.

“This past year, there has been a reckoning around racial justice. At the same time, the pandemic has brought new waves of misinformation and mistrust of science — so now is the time to promote new kinds of solutions. It’s essential that we come together as a community of scientists and engineers to do good in the world.”