City officials have a new tool for planning and responding to flooding at hospitals and other critical facilities on the watersheds of Brays, Sims, Hunting and White Oak bayous. Built by Rice engineers, the city’s Flood Information and Response System (FIRST) is a radar-based flood assessment, mapping and early-warning system.

Developed under a federal grant by Rice’s Severe Storm Prediction, Education and Evacuation from Disasters (SSPEED) Center, FIRST covers several flood-prone and at-risk communities, including Kashmere Gardens, Gulfton and Sunnyside. Phil Bedient, the lead engineer on the project and SSPEED director, said the idea for FIRST arose during the height of the pandemic.

“The idea is to provide a tool that can help emergency managers better deal with situations with multiple risks,” Bedient said. Funded by the CARES Act and commissioned by the Houston Health Department, FIRST is similar to the Rice/Texas Medical Center Flood Alert System, which has performed accurately in more than 60 storms over Brays Bayou, including Tropical Storm Allison and Hurricane Harvey. Bedient created that system more than 20 years ago, and the latest version rolled out in 2020. 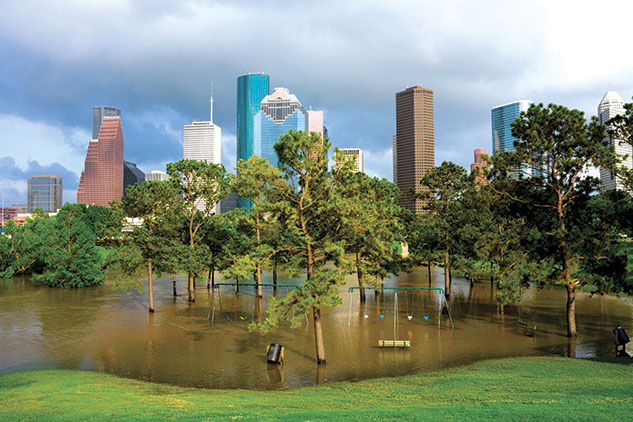 “The virus that causes COVID-19 was detected at all wastewater treatment plants in Houston, prompting concern that overflows could potentially expose nearby communities to the virus,” said Loren Hopkins ’89, chief environmental science officer for the Houston Health Department and professor in the practice of statistics at Rice. “The FIRST model assessed what areas and facilities are at highest risk of overflows that could spread SARS-CoV-2 and other pathogens during flooding and similar events. The information gained will inform the public health response to control the spread of pathogens that could make people sick.”

SSPEED hydrologists created maps of the elevation, land use and slope on every tract of land in a watershed. Using a high-speed server, they ran hundreds of simulations to determine where and how quickly water would rise during intense rainfall events. During a storm, weather radar precisely measures rainfall at a given moment over each portion of the watershed. That data and information from stream gauges are fed to a computer that compares the input with prepopulated scenarios from the map library.

The FIRST flood plain map library was created by Rice undergraduates. The funding to create the system was approved in the fall, and it had to be built before the CARES Act expired Dec. 31. “They performed herculean tasks,” Bedient said of the students. Nick Fang ’08, a civil engineer at the University of Texas at Arlington and another member of the SSPEED Center, developed FIRST’s web interface and software for incorporating radar data. The system, Bedient added, performed well during spring thunderstorms and will get better as SSPEED fine-tunes it with data from those and other storms.