By Elizabeth Leland  •  9 months ago 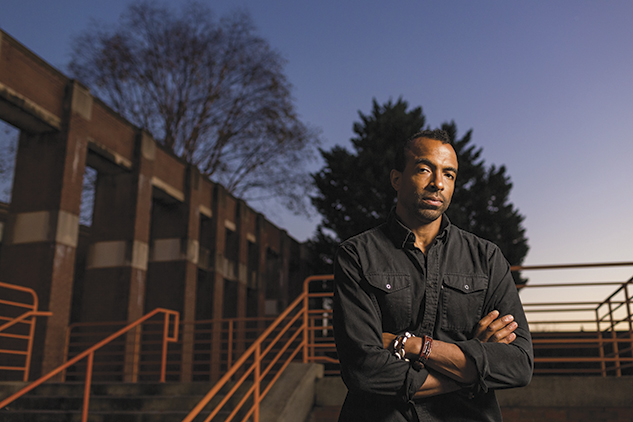 Mark Little photographed at the Hayti Heritage Center in Durham, North Carolina. Located on the site of the historic St. Joseph’s African Methodist Episcopal Church in the storied Hayti neighborhood, the center served as the opening venue for the 2019 Black Communities conference co-founded
by Little. Photo by Dare Kumolu-Johnson

After a day spent drilling for soil samples on the slope of Mount Meru, a dormant volcano in Tanzania, Rice professor Cin-Ty Lee heard a soulful tune drifting across the tropical African air. His graduate student, Mark Little ’08, had pulled out his alto saxophone and begun to play.

“A lot of us scientists don’t know how to operate or interact beyond our bubble of scientists, but Mark has so many different interests and can relate to anybody,” Lee said. “When we were out there in Africa, he was supposedly my student, but we were more like colleagues. He was learning from me. I was learning from him. Over the years, I have looked to him a lot for moral leadership and how just to be a person.”

It came as no surprise to Lee that after Little graduated from Rice with a Ph.D. in geology and geophysics, he pivoted to a job that has little to do with geology or geophysics. Little heads two initiatives — NCGrowth and CREATE — at the Kenan Institute of Private Enterprise at the University of North Carolina at Chapel Hill, drawing on his commitment to helping rural and underserved communities in North Carolina and in the low country of coastal South Carolina.

In both states, more than 13% of the population lives below the poverty line, according to the U.S. Census Bureau, with poverty rates above 20% for African Americans, Latinos and Native Americans. NCGrowth provides technical assistance to businesses and local governments while CREATE contributes research, data analytics and policy development.

“We focus on places we like to call ‘high potential,’” Little said. “Other people have other names for these places — high poverty, etc. The way I like to think about what we’re trying to do is we’re trying to radically change places and how people think of themselves and how outsiders think of them. We provide on-the-ground support for people who have not reached their aspirations yet.

“Sometimes a project is very concrete,” he said, recalling the time a graduate student in engineering built a robot to take over the time-consuming task of dropping seeds into growing trays at a wetland nursery near the North Carolina coast. “And sometimes it’s meta: Here’s a planning document to think about an opportunity that exists.”

Little joined the Kenan Institute in 2011 when he needed a job and the institute needed a part-time research associate. That led to a full-time research position, and, three years later, he was named executive director of the institute. He stepped down in January 2020 to devote more time directly in the field with NCGrowth and CREATE.

“I feel like I’m where I need to be,” he said. “My goal is to increase the work and profile of what we’re doing and the vision we have of this possible future that we could be existing in. Given our focus both on communities struggling and on Black lives, I am doing everything I can do to push things forward.”

At NCGrowth, Little works with eight managers overseeing more than 50 projects annually. They identify communities based on economic factors such as median income, unemployment rate and poverty rate, and hire graduate students from 20 universities across the Carolinas to conduct on-the-ground analysis.

In his home state of North Carolina, which stretches 500 miles from the barrier islands of the Outer Banks to the Great Smoky Mountains National Park in the west, pockets of poverty can be found in wealthier urban centers such as Charlotte and Raleigh. But most of the state’s poverty is concentrated in the vast rural regions of the coastal east and mountainous west — a legacy of slavery and historically low wages, among other things.

At NCGrowth, Little works with eight managers overseeing more than 50 projects annually. They identify communities based on economic factors such as median income, unemployment rate and poverty rate, and hire graduate students from 20 universities across the Carolinas to conduct on-the-ground analysis.

In Tarboro, a town of 11,000 residents in eastern North Carolina, an MBA student helped a boat manufacturer redesign his plant floor to be more efficient. A team of graduate students with expertise ranging from planning to industrial design advised the city of High Point on ways to transform an area of abandoned furniture factories into a manufacturing hub. And in the city of Asheville, in the Blue Ridge Mountains of western North Carolina, another team provided industry research and social marketing for a company that crafts nonalcoholic beverages.

“For any particular project, there’s a project manager who owns the relationship and makes sure the project moves along,” Little said. “And then there’s another pool of people — professionals and professors — who support the work and make sure the work we are doing is quality.” 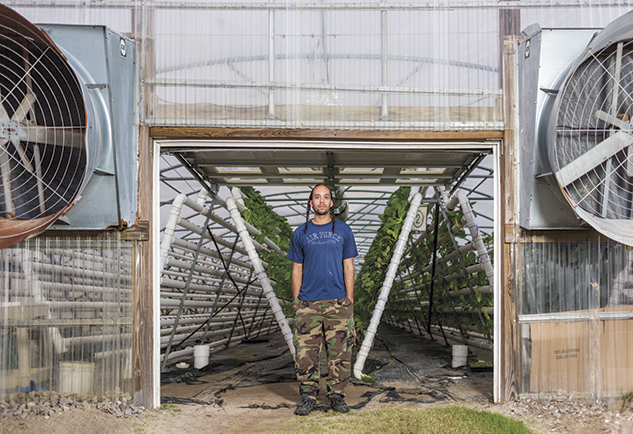 Roderick McMillan is a beneficiary of NCGrowth and the owner of MG3 Farms. He stands outside of the hydroponic grow house he created by converting a former tobacco greenhouse on his family’s farm in Maxton, North Carolina. Photo by Dare Komulu-Johnson

Little’s approach is to discover what a community or business envisions for itself and determine if there is a way that the centers at the Kenan Institute can support that vision. In 2016, NCGrowth undertook a study for the University of North Carolina at Pembroke, which was founded by members of the Lumbee Tribe in 1887 and is now one of 16 campuses in the statewide UNC system. Officials there were looking for ways to support the surrounding community, where 1 in 4 people live in poverty.

NCGrowth found that only 5% of the university’s vendors came from the town of Pembroke and only 22% from surrounding Robeson County. One of the most startling discoveries was that only 2% of the produce for its dining hall came from local farmers despite the fact that the university is located in one of the state’s largest agricultural regions.

We’re very much on the ground: What is the problem and how do we fix it? What businesses would be successful in a town? We are also doing academic research and talking with policymakers. We are working toward a vision of the future that looks equitable. — Mark Little

NCGrowth helped identify local suppliers, and now the university buys more than 16% of its produce from within the community, pumping an estimated $100,000 into the economy every year. One beneficiary was Roderick McMillan, owner of MG3 Farms and a member of the Lumbee Tribe. After being laid off from his job at a granary, he decided to convert a former tobacco greenhouse on his family’s farm into a hydroponic growing business. “They helped me get set up legally and get my business going,” McMillan said about NCGrowth. He sells about 300 pounds of romaine lettuce to UNC Pembroke every week.

Based on the success of that project, Little has been talking with congressional offices about legislation to encourage or incentivize all of the country’s nonprofit anchor institutions — such as universities, hospitals and military bases — to buy from businesses in communities disproportionately impacted by the COVID-19 pandemic.

“There are a couple of things about us that I think are unique,” Little said. “First, we’re very much on the ground: What is the problem and how do we fix it? What businesses would be successful in a town? We are also doing academic research and talking with policymakers. We are working toward a vision of the future that looks equitable.”

After a project is completed, NCGrowth follows up with clients every six months for three years, measuring success through new job creation, job retention and new private-public financial investments.

Linda Joyner got to know Little in her role as commissioner for Princeville, one of the first towns in America chartered by freed slaves. Her community sought NCGrowth’s advice on ways to build its economy after years of distress exacerbated by devastating flooding from Hurricane Floyd in 1999 and Hurricane Matthew in 2016. Joyner heard about Little’s credentials before she met him: magna cum laude graduate of Harvard, Outstanding Graduate Student at Rice, postdoctoral fellow at Duke University and Luce scholar at Peking University. She expected someone “stiff and starched,” but his warmth put her at ease. “Mark became one of us,” Joyner said. “He doesn’t look like he’s standing above us. He is in the crowd with us. We know that we can call on him.”

Little talks just as passionately about the projects and the people he’s working with. Andrew Tsui, a health care lawyer in Washington, D.C., who has known Little since preschool, believes that Little’s role at the Kenan Institute allows him room to draw on a remarkable range of abilities. Little might not be as creative, Tsui said, if he were analyzing soils in a lab or working on Capitol Hill, where he drafted climate and mineral resources-related bills as a fellow with the American Association for the Advancement of Science. 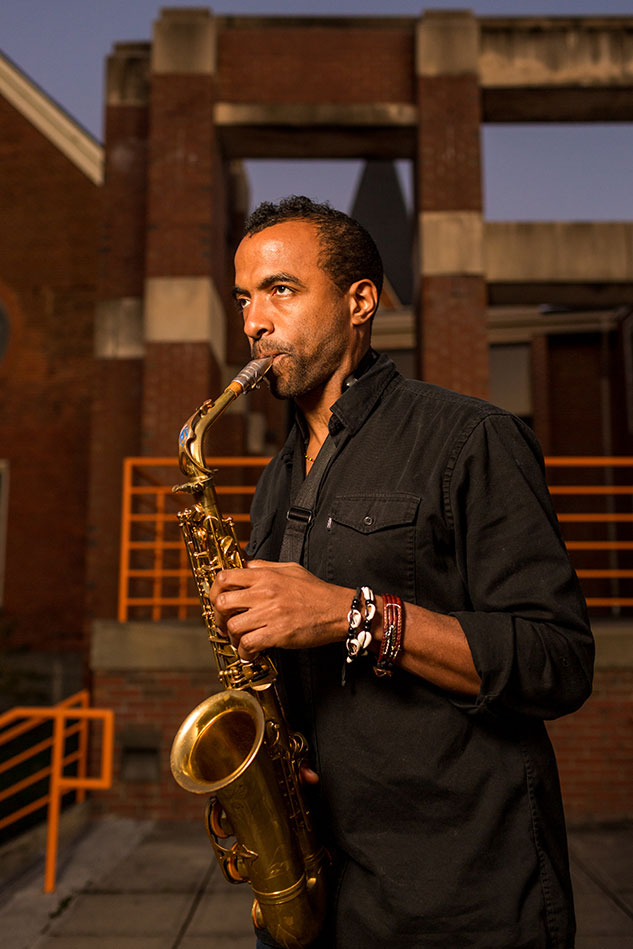 “Mark is the type of person who really creates opportunities but requires a multidisciplinary approach,” Tsui said. “He can talk about string theory in physics, and he can also talk about Native American history, Black history and Asian American history. …  In Mark’s world, analog is always better than digital. You can sit with Mark and have tea and conversation for hours and hours.”

Derek Hicks ’09, associate professor of religion and culture at Wake Forest University, remembers having those types of long, serious conversations with Little at Rice, where they each served a year as president of the Black Graduate Student Association. After they finished talking, they would go to the Proletariat nightclub where Little performed funk music with the band Porkpie.

“He is almost kind of paradoxical,” Hicks said. “He’s Bohemian meets center director meets musical performer. He can lead the efforts of a conference and then go home and continue building his own composter in his backyard.”

One of the most unique of Little’s interests is his lifelong desire to be an astronaut, a dream that consumed him as a boy captivated by the science fiction shows “Star Trek” and “Doctor Who” and novels by Octavia E. Butler.

One of the most unique of Little’s interests is his lifelong desire to be an astronaut, a dream that consumed him as a boy captivated by the science fiction shows “Star Trek” and “Doctor Who” and novels by Octavia E. Butler. He still holds onto that dream. In 2016, he advanced to the NASA interview round at Johnson Space Center in Houston but wasn’t selected. He applied again in 2020 and is one of 12,000 applicants awaiting a decision. “The likelihood is close to zero,” Little said. “But I still think about it.”

For now, his feet are planted on the ground in North Carolina. He and his wife, Christian Douglas, a biostatistician, live in Chapel Hill with their three young children and Little’s parents. He draws a parallel between his efforts to become an astronaut and his current endeavors to help underserved communities.

“Some people need to work toward something they believe is going to happen. But I don’t need that. Reality doesn’t dissuade me from doing things,” Little said. “I don’t need to fool myself into thinking something will happen to make myself do it. The places we are working with face significant challenges … and I don’t have illusions that we’re necessarily going to be completely successful. But I’m hopeful that we will be, and if there’s any chance of being successful, then it’s worth trying.”