We’ve Been Here Before

We’ve Been Here Before

Two centuries ago, an epidemic  led to political and racial strife and  exacerbated fears of immigrant  refugees. What does history tell us  about the politics of disease? 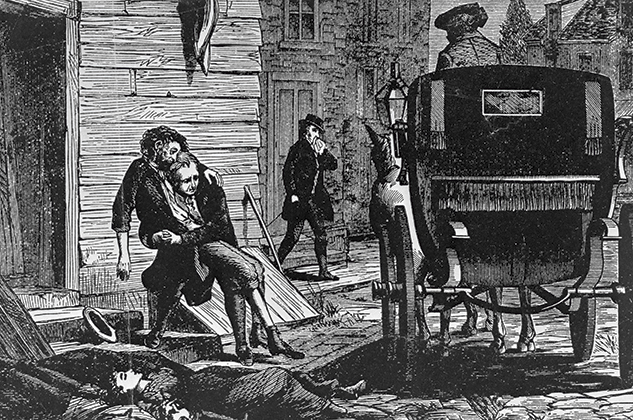 This woodcut from 1793 depicts Stephen Girard, a French banker, caring for the sick during the yellow fever epidemic in Philadelphia. Carriages rumbled through the streets to pick up the dying and the dead. © Bettmann Archive / Getty Images

By August, the disease had reached Philadelphia. But James Hutchinson, the city’s physician of the port, refused to close the port to refugees. Hutchinson believed that the disease was being spread due to local conditions, and he explained his decision to keep the port open to Pennsylvania’s governor, writing “I have learned of no foreigners or sailors that have hitherto been infected.” By the middle of November, more than 10% of Philadelphians had died, and the city’s College of Physicians balked at Hutchinson’s refusal to act. They passed a resolution declaring that the pestilence could never have “been generated in this city, or in any other parts of the United States” and therefore must have “been imported.”

These doctors were not only divided over whether local conditions or refugees were to blame for the spread of the disease — they also belonged to different political parties.

Republicans like Hutchinson favored an agrarian lifestyle and blamed the putrid conditions in the city for making people ill. However, Federalists, including most of the city’s College of Physicians, wanted to close the city to French refugees and blamed them for the spread of the disease. They feared that the Republicans’ support for the French Revolution could lead to bloody upheaval in the United States.

The year was 1793, the disease was yellow fever, and Philadelphia was the new nation’s capital.

We often think that political disagreements over how to deal with diseases such as COVID-19 are recent phenomena. But the United States has been shaped by experiences with diseases and their political interpretations since its founding.

Martin Pernick, a historian of medicine at the University of Michigan, has shown that Philadelphia’s 1793 yellow fever outbreak accelerated the formation of the United States’ first party system, which emerged early in George Washington’s second term as president. Foreign policy was a major cause of the split between the Federalists led by Alexander Hamilton and the Republicans led by Thomas Jefferson. The Federalists favored closer ties with Britain while the Republicans favored Revolutionary France. When yellow fever appeared in Philadelphia in August 1793, political opinion shaped government officials’ and physicians’ responses.

Today, epidemiologists recognize that yellow fever is a viral disease passed from person to person by Aedes aegypti mosquitoes. Yellow fever is named for the jaundice that occurs in severe cases when the virus damages the liver, causing bilirubin levels in the body to rise and leading to the yellowing of the skin and eyes. Because mosquitoes transmit yellow fever, outbreaks in temperate climates are largely seasonal, peaking in mid-to-late summer and dwindling with freezes in autumn or early winter. The disease followed a similar course in Philadelphia in 1793, having been recognized in August and fading by early November.

In 1793, viruses were unimagined. The international medical community debated whether illnesses could spread via contagion, but specific disease-causing microorganisms had yet to be envisioned. Instead, physicians believed that noxious smells and vapors in the air, often referred to as miasmas and effluvia, could be a threat to health.

When yellow fever developed in Philadelphia, the city’s doctors were already divided over whether diseases were the product of local miasmas and effluvia or could be passed from person to person. The outbreak, however, forced them to transform their beliefs into concrete action. Physicians with Republican leanings generally believed that local conditions in Philadelphia, including putrid smells, were the main cause of the disease. This fit neatly with their desire to accept French refugees, who held anti-urban and pro-agricultural beliefs. Federalist physicians, by comparison, tended to have a contagionist view that fit with their desire to keep French refugees out. Federalist leaders such as Hamilton used this connection to push for a ban on trade with French colonies as well as stop the immigration of refugees.

How Americans responded to yellow fever in 1793 was deeply political. Roughly 20,000 people fled Philadelphia, a city of 50,000, including most of the federal government. Federalists in particular followed their belief that refugees had introduced a contagion to the city and left. However, local Republicans organized a response that included setting up a hospital in an abandoned estate and organizing nurses to serve the city.

The 1793 outbreak in Philadelphia also reflected the politics of contemporary race relations. Absalom Jones and Richard Allen, founders of the city’s Free African Society, organized Black volunteers to serve as nurses during the outbreak. Pennsylvania had passed the first law in the nation to gradually end slavery in 1780 in the midst of the Revolutionary War; by the 1790s, Philadelphia was home to the largest community of free Black people in the United States.

When yellow fever struck Philadelphia, assumptions about racial differences and the politics of Black citizenship also influenced responses. Republican-leaning Benjamin Rush, America’s most renowned doctor and a signer of the Declaration of Independence, believed that Black people were unable to be affected by the disease, and his theories spurred Jones and Allen to call for Black nurses. Many Black Philadelphians responded favorably, in part because they wanted to demonstrate their worthiness as citizens in response to growing political efforts to curtail Black Americans’ rights in the 1790s.

Rush’s recommendation to use Black nurses was based in widely accepted, but ultimately wrong, medical assumptions about race. The disease probably did first evolve in tropical West Africa, but enslavers contributed to its spread to the Americas by forcibly relocating infected people from African countries to cities and plantations in the New World.

When enslaved Africans arrived in the Caribbean and the American South and first encountered European doctors, they probably were less likely to die from yellow fever than white people. However, there is little evidence that people of African descent had some innate protection from the disease. Instead, people who were infected with the disease early in life generally had milder reactions and were more likely to survive. This means that people who grew up in West Africa — and later the plantation South — where yellow fever was endemic were less likely to die from it as adults.

However, the disease had the same effect on Black and white Philadelphians who had not been exposed to yellow fever as children. Many of the supposedly immune Black volunteer nurses caught the disease and died. To add insult to injury, Federalist-leaning Philadelphia publisher Mathew Carey published a tract in the closing weeks of the epidemic claiming that Black Philadelphians had taken advantage of the situation and used their natural immunity to “exact [payment] with the utmost rigor from starving families, and then [didn’t] do their duty” to care for the sick. Even as Black Philadelphians risked their lives to help their fellow citizens, their efforts were besmirched for political ends.

Federalists would emerge as the stronger party after the epidemic despite the efforts of Republicans to combat the disease. Some Republicans — such as Hutchinson — died, leaving a leadership vacuum. But more importantly, the Federalists’ political message played better to the public. Most Americans preferred to believe that refugees were the source of the contagion and that their home environment could never produce anything so harmful.

Today, as political parties in the United States argue over responses to COVID-19 and the relative merits of reopening the economy and continuing social distancing, it seems like politicians are seeking to score political points regardless of the facts. But diseases have always been political.

The impact of an illness is often impossible to determine even after the fact, so in the midst of a pandemic, we can only honestly interpret the information we have and choose whether we should err on the side of commerce or human life. We also need to remember that the costs of disease do not fall evenly on all people. Often the most vulnerable in society — those considered marginal to the nation — bear a disproportionate risk in their exposure to disease, and still their contributions go unrecognized.

Sean Morey Smith earned a B.A. in computer science and history in 2005 at Rice. Earlier this year, he also earned his Ph.D. in history at Rice.