1950s
What a pleasant surprise to meet and chat with Anne Bray Berling ’47 (BA). … Like everyone else at Rice, I knew who Hubert Bray 1918 (PhD) [her father] was. He was a treasure of Rice, in that he was the perfect combination of a splendid mathematics professor and an unpredictable and entertaining teacher. His math students quickly learned to stay alert — or else. I watched a friend slowly nod off as Bray simultaneously backed up to grab a chalkboard eraser. Everyone in the class save one knew what was coming next. We gave Bray a nice round of applause even though it was only a glancing shot. — Contributed by class recorder Ed Millis ’50 (BS)

1960s
To celebrate the 75th anniversary of V-E Day, the Lone Star Flight Museum … [organized] a lengthy show all around Houston with more than two dozen WWII Warbirds. This is the first time something like this has been done, and millions were watching. I sat in the shade on my driveway with my mask on, binoculars in hand, watching the real-time commentary from newscasters in the faster helicopters on the iPad, listening for the grumble of the heavy old propeller planes in the distance, flying low. Finally spotting those planes lumbering slowly in the sky was purely thrilling. It is not the first time that I have thought about courage in times of peril, a thought that is very appropriate for getting through this tough pandemic. — Contributed by class recorder Michele S. Roberts ’67 (Brown: BA)

1970s
Jeffrey Lee “Jeff” Cox ’70 (Will Rice: BA), a loving husband, father, scholar and activist, passed away Feb. 9. … Our class’s final few years were politically tumultuous, especially relating to the Vietnam War. The culmination of campus protests was an agreement that a class representative would speak at our commencement. Jeff was chosen to present the speech, which he had helped write along with Rick Weber ’70 (Baker: BA) and George Greanias ’70 (Wiess: BA), and was reviewed by Rice administrators. The speech was passionate and controversial, but captured the anguish we felt over the politics of the times. It was considered important enough that both the Thresher and Sallyport reprinted its text in full. In Rice’s first 100 commencements, Jeff was the only student to have given a speech. — Contributed by class recorder Mike Ross ’70 (Baker: BA;MS, 1974) 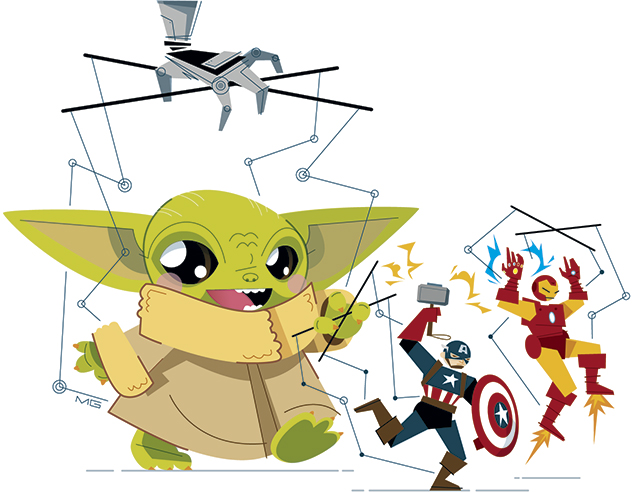 “For 15 years, I’ve been creating practical (as opposed to computer-generated) special effects in Los Angeles. My focus is on building the animatronic inner workings of state-of-the-art puppets, which I often puppeteer as well. I’ve made and performed key characters in dozens of commercials, international art exhibits and expositions, TV shows and feature films. I’m one of the lead mechanical designers at Legacy Effects in San Fernando, Calif., where I’ve built pieces for movies such as ‘Pacific Rim,’ ‘Iron Man 3,’ ‘Captain America: The Winter Soldier’ and ‘Captain Marvel,’ among others. Most recently, I was lead mechanical designer and puppeteer for the animatronic dinosaur character Old Lace in Marvel’s ‘Runaways’ on Hulu and for Baby Yoda (yes, that one!) on Disney’s ‘The Mandalorian.’ I also built and performed Tom Hanks’ robotic co-stars in the upcoming movie ‘BIOS.’” — Contributed by Peter Clarke ’00 (Hanszen: BA)