The Future is Houston

By Jennifer Latson  •  3 months ago

The Future is Houston

Based on almost 40 years of data, sociologist Stephen L. Klineberg paints a portrait of a city that heralds the changing face of America. 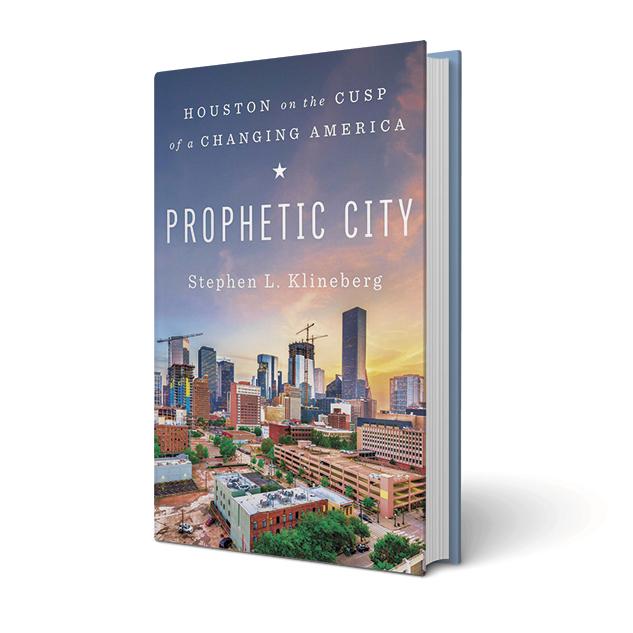 That’s the conclusion Rice sociologist Stephen L. Klineberg presents in “Prophetic City: Houston on the Cusp of a Changing America” (Simon & Schuster, 2020), the culmination of 38 years of demographic data drawn from his annual Kinder Institute Houston Area Survey — the longest-running survey of its kind. In that time, Houston has evolved from an Anglo-dominated boomtown where oil was power and cash was king into one of the most ethnically and culturally diverse cities in the country — more so in some ways than New York.

Klineberg himself was a somewhat reluctant Houstonian. When he took a teaching gig at Rice in 1972, it wasn’t because he felt a magnetic attraction to what he describes as “this mosquito-infested, oil-lined, smoggy and polluted swampland.” But during the boom years, Houston’s rapid growth and transformation made it “a perfect laboratory for a sociologist interested in social change,” he writes.

The book traces Houston’s development from the boom times through the oil bust that came just after Klineberg conducted his first survey, and nearly four decades since. It charts the ways Houston’s economy and population transformed — and the ways they herald similar changes in the national landscape. Like the rest of the U.S., Houston has witnessed the decline of its natural resource-based economy and the rise of a new knowledge-based economy. It just saw it happen earlier and faster than in other parts of the country. Likewise, Houston has seen a decline in its Anglo population and an influx of Black, Asian and Hispanic residents that other parts of the country are just now noticing. In fact, the latest census reveals that more than 70% of Harris County residents under the age of 20 are Black or Hispanic. Houston’s Anglo majority isn’t on its way out — it’s already long gone.

“Prophetic City” came out just as the Black Lives Matter movement was gaining momentum this summer in the wake of numerous deaths of Black Americans at the hands of white police officers. Racial equity still eludes much of America, and that holds true for Houston, too. But Klineberg’s surveys show that attitudes are changing here, especially among the younger generation. White residents increasingly see Houston’s diversity as a source of strength rather than a problem, and their fear of an “invasion” of undocumented immigrants has declined precipitously in the past few years.

“The demographic transformation is a done deal,” he writes. “You can close the border, seal off America, build an impenetrable wall, and deport all 10 million people who are here without the proper papers; none of those efforts will make much of a difference. No conceivable force will stop Houston or Texas or America from becoming more Asian, more African American, more Hispanic and less Anglo as the 21st century unfolds.”