Rice’s one and only improv group works hard to be spontaneous. 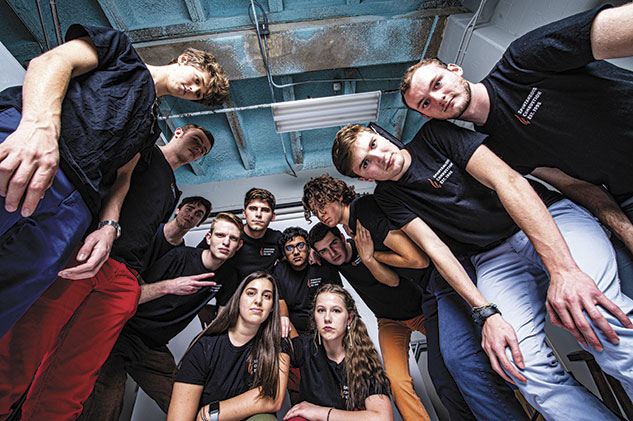 A murderous alchemist, a communist Barney and a pair of rival unicyclists are just a handful of the colorful characters that were onstage at Herring 100 for Spontaneous Combustion’s first show of the spring semester.

Commonly referred to as SpoCo, the 12-person ensemble typically performs on campus each month. As Rice’s only improv group, they also compete in the College Improv Tournament’s regional competition every spring. Students may audition to join SpoCo in the fall, where they compete for a spot by participating in improv games and exercises. “I would say about 20 people audition, and we have taken anywhere from one to five people. We prefer not to have any more than 12 members on the troupe at a time,” said Landon Mabe, a Hanszen College senior.

“Improv has helped so much more than just my acting. It makes it so much easier to think quickly on my feet, from essays to just talking to people. It makes me more outgoing and confident in myself.”

Braedon Schlechte, a freshman at Martel College, said SpoCo is a comical distraction from the more stressful aspects of life at Rice.

“It’s nice to have a place where you can just be silly and mess around. … If people are going to be laughing at you, at least you can be on the stage and wanting them to laugh,” Schlechte said. Their spontaneity does require some rehearsal, though. SpoCo typically has two-hour practices twice a week, where members run through games and exercises to work out their comedy muscles.

“People ask us, ‘How do you rehearse for improv?’ We don’t plan everything before we go in, but there are fundamentals of improv that you have to work on, and that’s what we practice,” said Mabe.

One of the most important principles of improv is the phrase: “Yes, and … .” SpoCo members always have to be ready to respond to any strange turn of events in a scene. Noah Kenner, SpoCo’s president and a Martel College senior, said that although they rehearse often, all characters and dialogue in their performances are created in the moment. “I’d say that the framework we operate under is set beforehand, but the actual content is 100% on the spot,” Kenner said.

For many members, these skills help them beyond just being quick-witted onstage. “Improv has helped so much more than just my acting. It makes it so much easier to think quickly on my feet, from essays to just talking to people. It makes me more outgoing and confident in myself,” said Jake Yount, a sophomore at Martel College.

SpoCo was originally created by Rod Sanders ’99 in 1995. Some alumni from this group have gone on to pursue a career in comedy following graduation. One of the most notable is Adrien Pellerin ’13, an actor, writer and comedian based in New York City. His original series, “Night Crew,” won the Comedy Central Development Award at the New York Television Festival in 2017.

In their weekly practices, members work on their group dynamic and getting to know each other better. “Most of what we’re practicing is working with each other, not just working on improv,” Yount said. “I didn’t expect to find such a strong community,” said Lily Sethre-Brink, a Baker College freshman. “We do the wildest, most random, probably very stupid things together that are also very fun.”