Fifty years ago, an idea from a couple of Rice students sparked an enduring tradition. 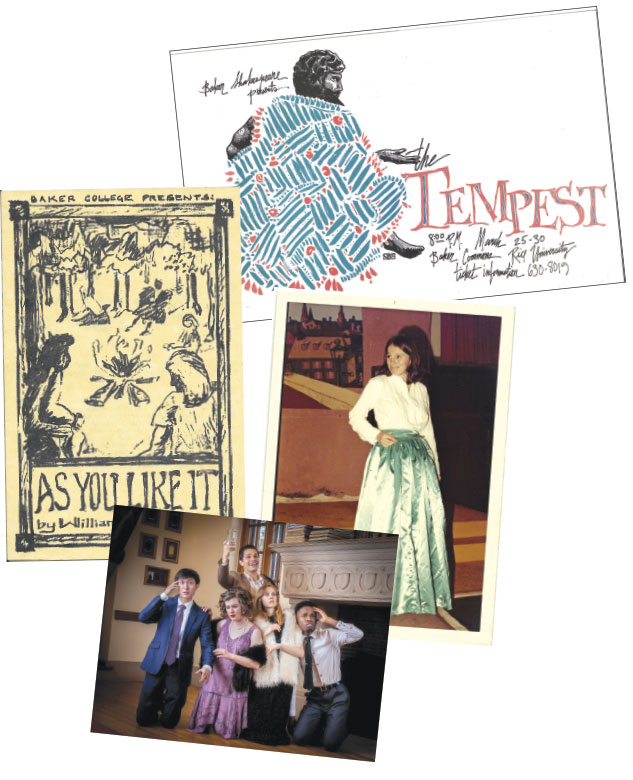 The origin of Baker Shakespeare, now affectionately known as “BakerShake,” began in 1969 when Chuck Becker ’73 and Ed Dickinson ’73 asked English professor Wes Morris to help them produce and perform one of Shakespeare’s plays in the Baker College Commons. “I quickly said ‘no,’” Morris recalled in a written history of this now-beloved tradition. “However, when committed to an idea, Rice students rarely take no for an answer. I was intrigued; they were persistent.” Morris then embarked on the daunting journey that he now calls one of the highlights of his Rice career.

Morris approached his English department colleague and resident Shakespeare expert, Dennis Huston, for added guidance and support. When asked which play would work best for the spring 1970 performance, “[Huston] suggested ‘The Taming of the Shrew’ because it was a comedy, had a straightforward plot, fewer characters, and demanded only sparse stage settings and props,” he wrote.

However, the newly formed group quickly faced the project’s many challenges. “Most of us were doing our first Shakespeare play and struggling to make the language accessible to the audience — and sometimes to one another,” remembered Huston. They also had to transform the Baker Commons into a performance space, grappling with staging, lighting and other production elements. “A stage appeared, based on a design from Donald Bayne ’73; Jim Thomson ’73, Chuck Becker and Bronson Stilwell ’73 built and ran the lighting system; spotlights were ‘borrowed’ (I hope); lumber was delivered; and costumes and props were ‘found’ or made,” Morris explained. The group worked tirelessly up until the day of the performance. “Then people came, and the magic of theater happened for our little play.”

The success of their inaugural production gave those involved the courage to tackle “A Midsummer Night’s Dream” in 1971 and “Twelfth Night” in 1972. In its fourth year, the Baker crew decided to try something different: “The Country Wife” by William Wycherley. “This show was not nearly as much fun to do as the three earlier plays, so we went back to staging Shakespeare,” Huston recalled. “Not long after that, the phrase ‘BakerShake’ was born and took hold permanently.”

Like many campus traditions, BakerShake emerged out of Rice students’ ambition, perseverance and sense of community. “Chuck and Ed’s desire to put on a Shakespeare play in Baker Commons sprang from a deeper shared desire to understand ourselves and our human condition in its diversity and sameness, to explore the emotions and thoughts of people interacting with one another by acting them out onstage,” Morris concluded. “That’s what started BakerShake and keeps it going year after year.”