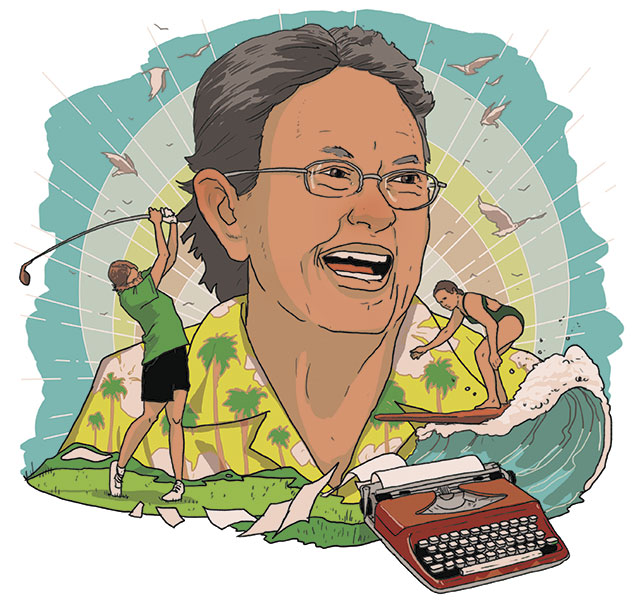 1950s
Sharon “Shay” Jones Bintliff ’57 (BA) has lived in Hawaii almost ever since graduating. She wrote a book of poems, “Soular Energy,” described by her as very personal and autobiographical. It is dedicated to her granddaughter, Ileiana, who passed away in 2005. Proceeds from the book go to Camp Anuenue, a summer camp on the North Shore of Oahu for children with cancer. In 2019, she published another book of poems, “Soular Rainbows.” In the introduction, Shay writes: “This book is dedicated to all the people in my life who have loved, encouraged and supported me in my quest for a career as a physician.” Both books are available on Amazon.
— Contributed by class recorders Anne Westerfield Brown ’57 (BA), LaNelle Ueckert Elston ’57 (BA) and Shirley Dittert Grunert ’57 (BA)

1970s
Regina Pappas Seale ’79 (Brown: BA) writes: “Social media postings and videos of Orientation Week at Rice reveal the changing times and traditions that now embody the Rice immersion experience. Matriculation remains a constant and still a cornerstone of the week, which is the official introduction and baptism into this unique world ‘beyond the hedges.’ As one would expect, with the advent of social media, what once was an individual and private experience of being a freshman is no more. Parents, family and friends now have the opportunity to peek at and join in this Rice excursion while alumni reflect and relive that fun, exciting and carefree week once again. …

“My Rice Orientation Week occurred 44 years ago, but I remember it vividly. … Following the pomp and circumstance of the ceremonial activities, there were three items of business that required our attention that week: an English competency exam, swimming proficiency test and class registration. Once completed, the remainder of the week was ours to enjoy — meeting, greeting and partying.”

Harry Burglass Jr. ’79 (Wiess: BA) writes: “I remember meeting Regina during Orientation Week while waiting in line to sign up for John Parish’s English class. We became fast friends. I don’t remember the swimming test (I was a good swimmer, so it probably wasn’t a big deal) or the English test, but Griff C. ‘Tracy’ Lee III ’79 (Wiess: BS; MEE, 1980) reminded me that we did have it. The day trip to Galveston was a lot of fun and there were a lot of parties, so maybe that’s why I don’t remember the daytime events as well! The most frequently asked icebreaker question, I think, was ‘what was your SAT score?’!”
— Contributed by class recorder Marian Barber ’79 (Jones: BA)

2010s
“On March 16, 2019, Gillian Wooldridge ’09 (Martel: BA) and I were married in Houston. We met in November 2014 at a Rice football tailgate and have been active in supporting Rice and Rice athletics throughout our relationship! More than 40 Owls attended the wedding, ranging from the Class of ’75 to the Class of ’15. The groom’s cake featured an Athenian owl and, in true Rice tailgating fashion, copious amounts of beer were chugged to the tune of AC/DC’s ‘Thunderstruck.’ Gillian and I live in Houston and continue to attend (or, in Gillian’s case, provide medical coverage for) as many Rice sporting events as we can!” — Contributed by Jonathan Myers ’12 (Will Rice: BA)