By Avery Ruxer Franklin and Katharine Shilcutt  •  9 months ago 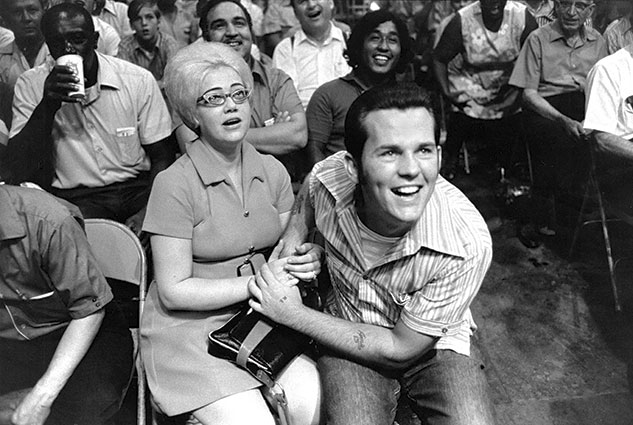 Almost a half-century has passed since photographer Geoff Winningham ’65, the Lynette S. Autrey Professor of Humanities and professor of visual arts, devoted his Friday nights to documenting the phenomenon of professional wrestling at the Sam Houston Coliseum. His acclaimed book, “Friday Night in the Coliseum,” published in 1971, was praised by critics from The New York Times, The Village Voice and Newsweek and became a rare collectible.

This year, Winningham, a key figure in the founding of the Rice Media Center, has reissued and updated his book in honor of the center’s 50th anniversary. More than 200 black-and-white photographs have been digitally printed, rendering highlights from Houston’s theatrical wrestling scene in vivid detail. Each image captures moments of what Winningham calls Houston’s own “folk theater” —  spectators screaming for a fight, garishly dressed competitors entering the arena, and sweating athletes flying through the air or slamming into each other behind the sporting ring’s ropes. 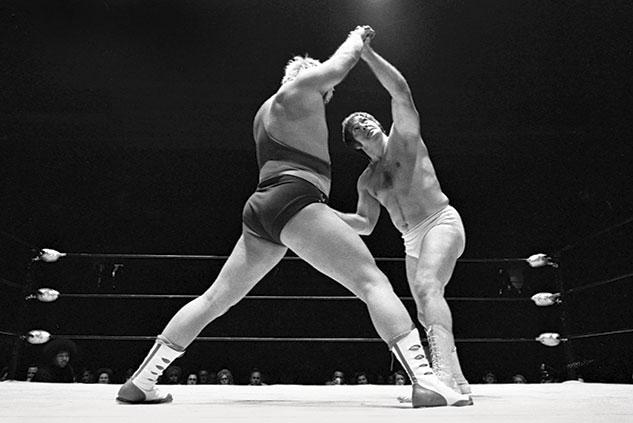 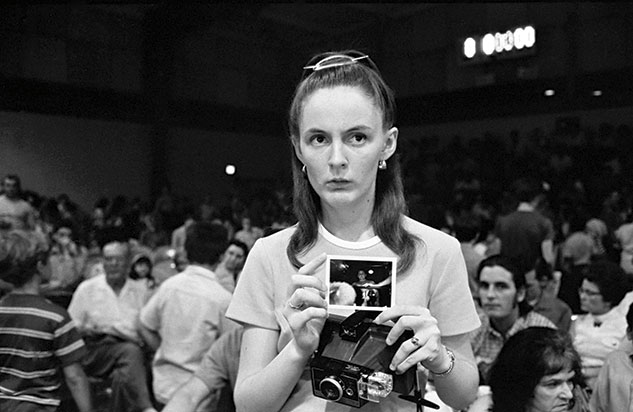 This spring, Rice Media Center showcased Winningham’s wrestling photography with a gallery show, book signing and gallery talk. The exhibition also featured video clips from his rarely seen 16 mm black-and-white films of the Houston wrestling scene in the early 1970s. It was an event that John Sparagana, the Grace Christian Vietti Chair in Visual Arts, called “stunning in its synchronicity.” Winningham had processed and printed the film originals during the center’s inaugural year.

During his gallery talk last February, Winningham described how a local newspaper ad sparked the idea for the series. “I was scanning the pages of The Houston Post … and came across a notice in the sports section: ‘Tickets available. Gulf Athletic Club presents an evening of professional wrestling in the Houston Coliseum. Main event: Chief Wahoo McDaniel vs. Johnny Valentine. 6 preliminary events.’” Winningham called the promoter, Paul Boesch, and asked to take photographs, and then he returned each Friday for eight months. Eventually, Boesch gave him access to go anywhere, including into the ring and the wrestlers’ dressing rooms. To regular attendees, Winningham became known as “the professor.” 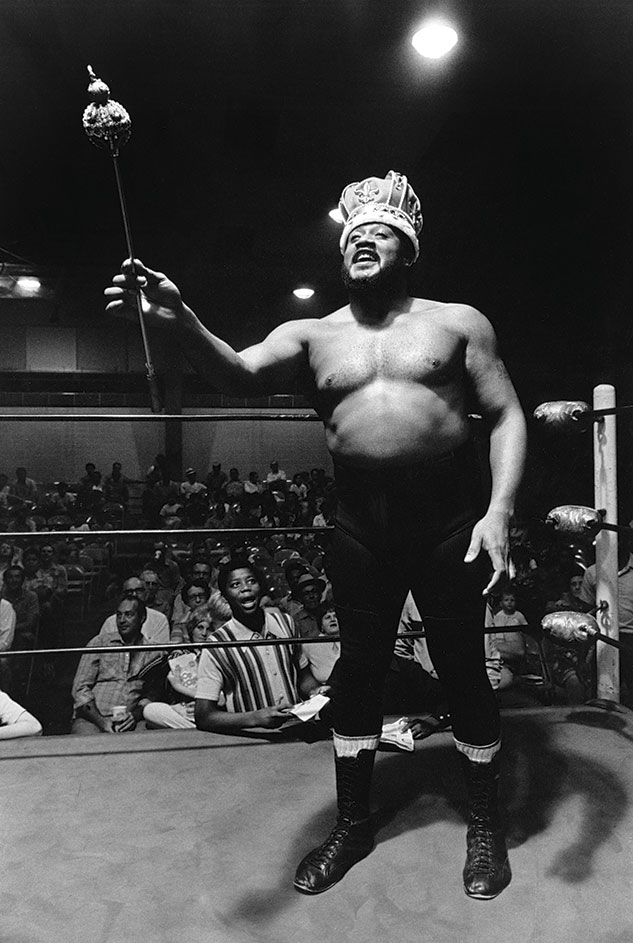 “I love that people can come [to the gallery] and say, ‘I was there in the front row, this takes me right back there.’”

“This would be all gone if it weren’t for photography and film to preserve this marvelous folk theater,” Winningham said. “I love that people can come [to the gallery] and say, ‘I was there in the front row, this takes me right back there.’”

Television stations across the country carried broadcasts of local wrestling matches and made their promoters and announcers into citywide celebrities. By 1985, regional wrestling was destroyed by the phenomenal growth and popularly of the World Wrestling Federation, with productions conceived and designed for a national television audience. Local and regional wrestling heroes were replaced by celebrity actors, while professional wrestling became a steroid-fueled caricature of its former self. 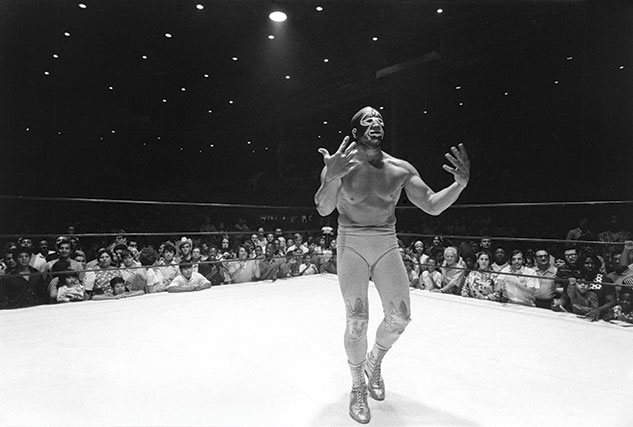 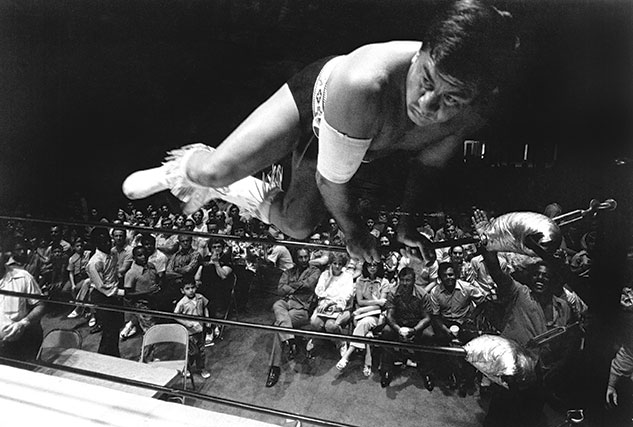 “I suppose that I should not be shocked that the kind of wrestling that I witnessed five decades ago has disappeared,” Winningham wrote in the afterword to his book’s new edition. “In time, all things change. Still, as I prepare the second edition of this book, as I look again at the pictures that I took and read the words of the people that I remember from my Friday nights in the Coliseum, I am saddened by what has been lost, and I am grateful for what I have been able to preserve.”

The new edition of “Friday Night in the Coliseum” is available for purchase here. As of March 8, due to COVID-19, all public events at Rice were limited or canceled, including the ongoing Rice Media Center 50th anniversary events. For rescheduling information, go to vada.rice.edu. 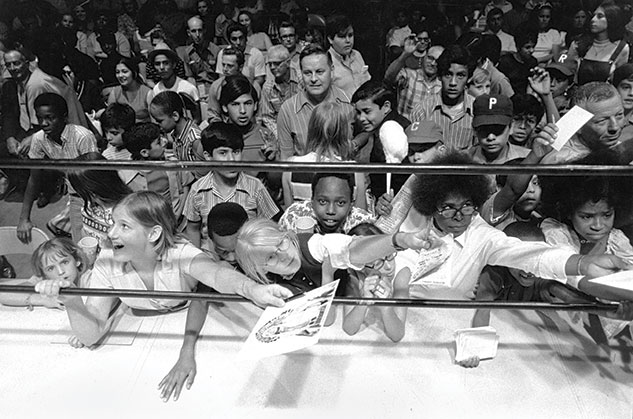 All photos by Geoff Winningham