Two ACL tears couldn’t keep Kendall Brice from moving forward — on the track or in the classroom.

“I don’t love winning,” says Kendall Brice ’20, an 800-meter runner on Rice’s women’s track and field team. It’s a refreshingly taboo thing to hear from an athlete. “Winning feels good, but it’s not what I love. I love moving.” Movement. Brice’s life is a study in it.

As a kinesiology major, Brice learns about it; on the track, she puts that knowledge into practice. “Every time I run, I go back to my biomechanics classes,” Brice says. “I think about how to reduce the torque movement on my knee. How to reduce the impact force going into my shins — based on how I place my foot on the ground, based on my stride, based on my cadence.” How an athlete who puts this much thought into running — but not winning — ends up on a Division I track and field team is, as she puts it, “a complicated path.”

I’ve seen people walk for the first time in six months, 15 years, ever. That makes me light up like nothing else. 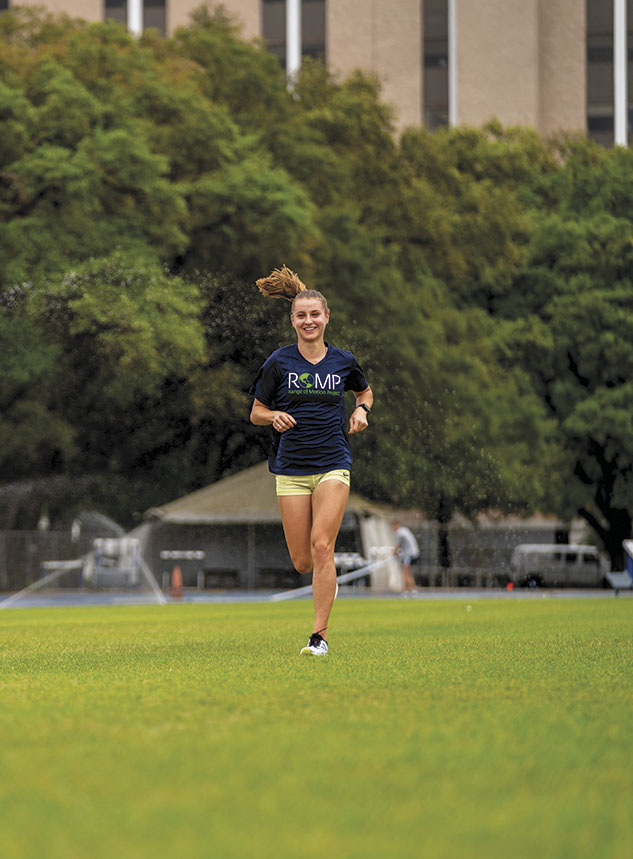 A runner in high school, Brice had opted not to pursue athletics in college. She wanted to focus on academics, but also, she had torn the anterior cruciate ligament (ACL) in her right knee during her senior season of track. She ended up tearing that same ACL again while playing pickup soccer three weeks into her first year at Rice. While rehabbing for the second time, she began to get the itch to run again, eventually emailing women’s track and field coach Jim Bevan about the possibility of walking on. He was on board. “I was sick of hearing everything I couldn’t do while rehabbing. I wanted to try and do it to see if I could — and I did,” Brice says.

After graduation, she plans to pursue a career that helps others get moving, too. In 2018, Brice volunteered with the Range of Motion Project in Guatemala to fabricate orthotic and prosthetic devices. “I’ve seen people walk for the first time in six months, 15 years, ever,” Brice says. “That makes me light up like nothing else.” Her dream is to serve those with mobility challenges, like amputees, and to be able to fit them for devices that will help them move better, whether running, playing basketball or standing to cook.

It’s no wonder she loves moving more than winning. “In high school, on meet days, I felt like I was going to throw up all day long,” she says. “Now, I calm my nerves by putting everything in perspective. I ask myself why I do this. Sometimes it’s to appreciate what I have. If someone gave you a T-shirt for your birthday, you’d wear it. I wear my mobility.”