By Jessica Murphy Moo  •  4 months ago

A former nonprofit fundraising executive spends Friday nights setting tables and sharing food, coffee and conversation with women on the margins of society. 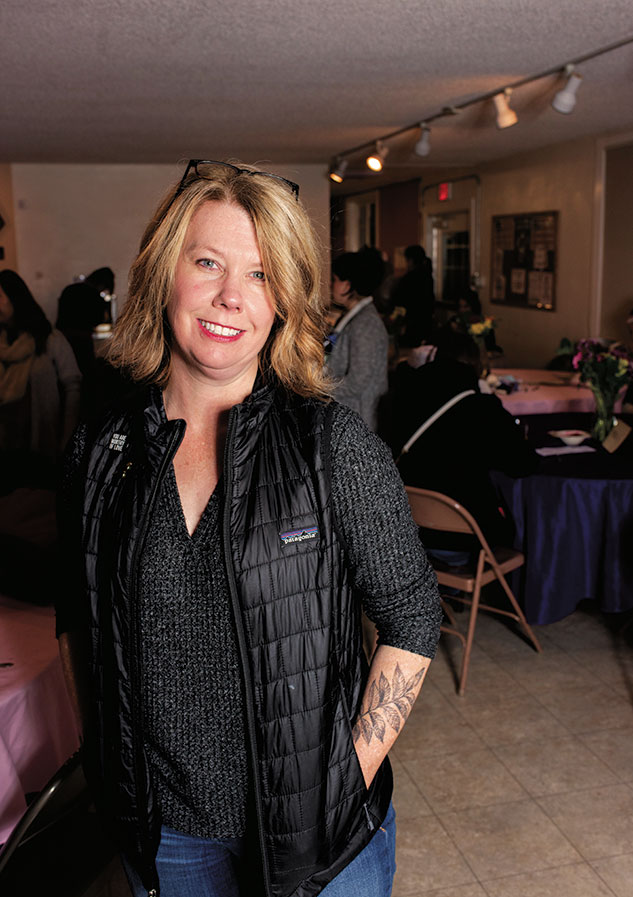 On a late August evening, Anneliese Davis ’95 — executive director of Rahab’s Sisters, a Portland, Oregon, organization that practices radical hospitality to vulnerable women — is greeting guests. “Want a candy bar?” she asks while holding out a bag. Some take one, some take a few but no one declines.

Some of the guests have come to Rahab’s after standing in line at a neighboring safe needle exchange. Some are sex workers. Some are homeless. All identify as women, all are living with the stigmas that derive from either poverty, homelessness, substance use disorder, mental illness or sex work, and all know that Rahab’s on Friday nights — from 5 to 10 p.m. — is a trusted, safe space.

“Trust comes over time, and it’s the most valuable thing we have,” says Davis. “My job is to protect that.” Until Davis came on board two years ago as the organization’s first employee, it had been entirely run by volunteers. They started by handing out coffee to sex workers, then they rented a space to invite people in for a meal.

Evenings have an ebb and flow. The early guests tend to be elderly women and mothers with young children. Some guests meet with licensed mental health counselors. Dinner is ready by about 7 p.m.; volunteers take orders and serve restaurant-style meals. Tables are set with tablecloths and fresh flowers. Some guests settle in and play bingo, the night’s activity.

There is no way to predict what the vibe will be or how many people will come on any given Friday night, Davis says, though they’d had a recent bump from an average of 70 to 115 guests.

Tonight, Davis is wearing black jeans and a black T-shirt with a floral design that says “Wild Feminist.” One night she was wearing a Rice University shirt, and a guest approached to say that she’d gone to Rice too. Davis’ short sleeves show not only a readiness to work — she takes out the trash and sets up tables while answering countless questions — but also the tattoo of pecan tree leaves on her forearm, a symbol of her Fort Worth roots.

Davis began her career in nonprofit fundraising in Texas, first in the arts and then in large institutional organizations that advocate for women. She was vice president of development for Planned Parenthood Gulf Coast and the chief development officer for the Houston Area Women’s Center. Rahab’s is a career shift for her — and something of a philosophical shift as well. “I’ve never been on the front lines,” says Davis. She finds that this job makes her more generous to people she encounters elsewhere. “I don’t immediately jump to a judgment or conclusion. I wonder what that person’s story is.”

She also hasn’t had a job where the goal wasn’t to “fix” something. As it turns out, with the right leadership, radical hospitality — as a beginning and an end goal — is something a group of like-minded women can achieve Friday after Friday for 16 years and counting.