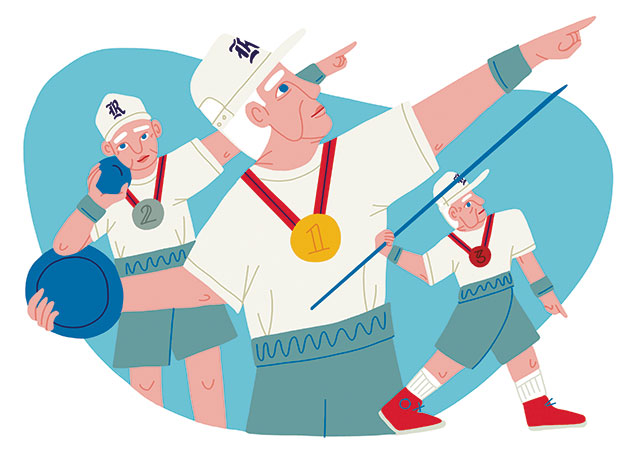 1950s
“One of our classmates, Jack Hudgins ’51 (BA, 1952), recently competed in the 2019 National Senior Games in Albuquerque, N.M. Jack competed in the 90–94 age group as he turned 90 this past December. (He is way older than me, as I didn’t attain that advanced age until two months later!) … He won the discus, came in second in the shot put and third in the javelin. I used to throw those implements too, but had to give up because my physical balance has reached the lousy stage and broken bones don’t appeal to me. Jack and I competed a number of years together in the Texas Senior Games. … I’m very proud of him, but somewhat jealous!” — Contributed by Jim Gerhardt ’51 (BA)

“In 2007, I was helping with a fundraiser for the Gulf Coast Museum. At the Gulf Coast Gala, the entertainment was Larry Gatlin and the Gatlin Brothers. When the show started, the first thing Larry Gatlin did was ask that the spotlight be put on our table, and he asked me to stand up. Then he said, ‘That’s Twyman Ash from Abilene, Texas, and I watched him play football for Abilene when I was in elementary school.’ Then he and the band started playing the Abilene High School song. I was never so shocked in my life. After his performance, he asked my wife and me to come to their dressing room to meet the band. He called his dad so I could talk to him and tell him I was with his son down in Port Arthur. This was one of the greatest honors and exciting times of my life. A lot of my friends were there, and they wanted to know how much I paid Larry to do that.” — Contributed by Twyman Ash ’59 (BS)

1960s
When I wrote to ask about his future plans, John Boles ’65 (Will Rice: BA) shared the following: “Although just retired from teaching, my official retirement will not be until June 30, 2020. I greatly enjoyed two styles of teaching over the years — undergraduate lecture classes and graduate seminars. I was particularly active with graduate students, mentoring some 62 PhD candidates [the last graduated in 2018]. I will miss getting to know class after class of undergraduates, especially after being involved as a nonresident associate of Will Rice College for more than 30 years.” John plans to continue his research and writing, using the resources of Fondren Library to support his efforts — so don’t be surprised if you still see him around next time you are on campus yourself.
— Contributed by class recorder Bill Free ’65 (Will Rice: BA)

1980s
“In 2009, my reconstruction of Henry Hobson Richardson’s house for Rev. Percy Browne made a small splash in the tiny, mirror-quiet pond comprising the community of architectural historians who are also Richardson buffs. This led to an invitation, in summer 2017, to address a symposium on the occasion of Richardson’s Ames Monument in Wyoming being designated a National Historic Landmark. The event was in effect a rally of Ames family descendants, young and old. It was a treat to close the afternoon with an hourlong presentation titled, ‘The Ames Monument as Architecture,’ which engaged an audience of specialists and layfolk alike ranging in age from 8 to 80.”
— Contributed by Mark Wright ’80 (Wiess: BA; BArch, 1982)