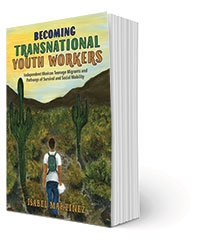 Even before a record number of unaccompanied children crossed the U.S.-Mexico border in 2014, Isabel Martinez had noticed that the number of young Mexican and Central American immigrants in New York was growing — and that they needed help.

Martinez, an associate professor of Latin American and Latinx studies at New York’s John Jay College of Criminal Justice, was already at work on a book about Mexican teens who’d traveled to the U.S. in unprecedented numbers in the early 2000s. She spoke with a friend who had founded the nonprofit Safe Passage Project, which provides free legal representation to underage immigrants facing deportation. Her friend said they were in desperate need of translators, since so few U.S. attorneys speak Spanish. So Martinez wrote up a proposal to hire five John Jay students to provide linguistic and cultural support for the work Safe Passage was doing. Like her, these interns were bilingual, bicultural and the first in their families to graduate from college.

Five years later, that effort has expanded and Martinez’s mission has a name: the Unaccompanied Latin American Minor Project, or U-LAMP. She’s hired 70 more interns since the first wave. They work as interpreters during screening interviews and meetings with attorneys, help with research, write and translate legal documents, and generally serve as a touchpoint for young immigrants. Since most of Martinez’s students are immigrants themselves, or the children of immigrants, they quite literally get where these kids are coming from.

So does Martinez. As she writes in her book “Becoming Transnational Youth Workers,” her own grandmother crossed the Mexican border as a teenager. “My grandparents had the same idea that many immigrants have today: They wanted better lives not only for themselves, but for their children and their children’s children. My advocacy for immigrant youths is based on the idea that everyone, regardless of birthplace, should be afforded the same opportunity to live free from violence and insecurity, just like my family did.”

The teenage migrants she writes about in her book came to the U.S. under different circumstances than the Mexican and Central American immigrants currently crossing the border. The earlier wave was motivated largely by economic factors; today’s teens are more likely to be fleeing violence, although poverty is still part of the problem. And the teens who made the trek in the early 2000s had less frequent run-ins with border patrol agents or U.S. Immigration and Customs Enforcement officers.

But while much of the recent media attention has focused on the migrant youths who’ve been detained along the border, Martinez is keenly aware that for many, the journey doesn’t end there — nor do the dangers. “While the border conditions are atrocious, the youths’ and families’ journeys and needs extend way beyond the border,” she says. “Often, youths are detained as they are making their way to other destinations, including New York City. In fact, at least 8,000 immigrant youths are projected to arrive in New York this year.” Martinez and her students will help by supporting the work of both the Safe Passage Project and Catholic Charities, which represent young migrants in petitioning for visas to keep them from returning to violent conditions in their home countries. 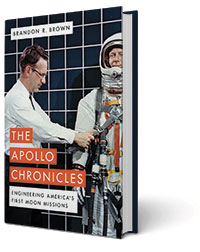 John F. Kennedy and Neil Armstrong tend to get the bulk of the lunar spotlight in most coverage of the Apollo program. But while both overcame tremendous hurdles to help make the manned moon landing a success, those hurdles pale in comparison to the extreme technical challenges NASA’s engineers faced. In “The Apollo Chronicles,” Brandon R. Brown focuses instead on five engineers who were instrumental in making the mission work — including some who’ve never been interviewed before.

Brown, a physics professor at the University of San Francisco, also happens to be the son of an Apollo engineer. And although the men who wore the spacesuits enjoy more of the glamour and the glory, the people who got them safely to the moon and back were heroes in their own right, as Brown’s narrative illustrates. “While I now appreciate just how brave our astronauts were, to sit on towers of explosive fuel and venture into a deadly realm, this book is more concerned with the astronauts’ protectors,” he writes. “I focus on the Earth-bound: the welders of space-worthy seams, the designers of heat shields, the stitchers of spacesuits, and those who computed razor-thin trajectories through space, with disaster awaiting any deviation or missed step.”

America was, after all, the underdog in the space race against the Soviets, which is why our achievement in landing a man on the moon is all the more stunning. Brown’s account of the engineering feats involved in building the world’s most powerful rockets — coupled with the intricacies of keeping humans alive on the journey — makes it clear that these were no small steps at all.

Karen Sagstetter’s latest poetry collection is a family album of sorts. The poems in “Commotion” introduce the reader to characters and places that are simultaneously vibrant and ghostly, buoyant and tragic, dying and larger than life.

In one poem, we meet a brother who cheerfully drinks himself to death in the Kansas farm country: “Morning, noon, afternoon, and night, you unwound on your stoop / chatting with everybody, quaffing jugs of wine / and jiggers of rye,” Sagstetter writes. “… I want away from your easy laugh, your prairie.” In another, we see an aunt, bedridden by obesity, through the eyes of a child too naïve to recognize the cruelty in the questions she asks and the jokes she retells: “Why are you so big? … Are you lazy? … Kids say That mama so fat she eats Wheat Thicks.”

The commotion inherent in many of these poems is internal. It’s the turmoil we experience when we love people who are complicated and flawed, like the father in one poem, who “made our house roar” with his unhappiness — but who reveals a different side of himself when he’s in his element, teaching his daughter to appreciate the wild beauty of the natural world. “I thought you hated us,” Sagstetter writes. “But in the woods your rough voice settled.”

In the Woods with My Father

When I was small
you were never happy.
You made our house roar—
I thought you hated us.
But in the woods your rough voice settled.
You’d find mosses and ferns
for me to touch, helped me listen
for frogs. You pointed to gawky turtles
struggling over the path but floating free in water.
I’m riding my bicycle
through brawny stands of silver maples
creating my own good breeze.
Sunlight slips through the ancient canopy.
A black snake idling in rhododendrons
startles a fat rabbit. I spy a baby owl
high on a limb. I think of you
wading into the current
showing me depth, danger, grace.
I want you to know
I’m more beautiful today than I’ve ever been.

— Poem by Karen Sagstetter and used with the author’s permission.