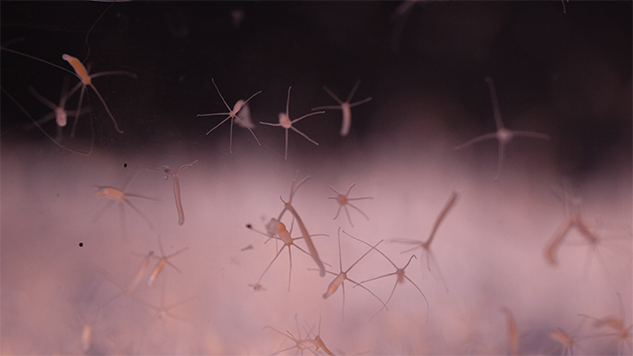 Among the amazing properties of the tiny invertebrate known as the hydra is this showstopper — if you cut one in two, both parts live. They don’t age, and their unique regenerative qualities invite additional research, says Rice electrical and computer engineer Jacob Robinson.

Robinson and his team have developed methods to corral the tiny, squid-like hydrae and perform the first comprehensive characterization of relationships between neural activity and muscle movements in these creatures. Their results appeared in Lab on a Chip, the Royal Society of Chemistry journal. Robinson is a neuroengineer with expertise in microfluidics, the manipulation of fluids and their contents at small scales. His lab has developed an array of chip-based systems that let scientists control movements and even sequester biological systems — cells and small animals — to study them up close and over long periods of time. Because the best way to characterize a hydra is to watch it for about a week, the lab is building a camera-laden array of microfluidic chips to produce time-lapse movies of up to 100 animals at once.

“If you look at them with the naked eye, they just sit there,” Robinson said. “They’re kind of boring. But if you speed things up with time-lapse imaging, they’re performing all kinds of interesting behaviors. They’re sampling their environment; they’re moving back and forth.”

The team hopes to connect neural activity and muscle response to learn about similar connections in other members of the animal kingdom.

Scientists at Rice and the University of California, Davis are studying a tiny invertebrate with amazing regenerative properties. Hydra could become a star in the research lab universe: