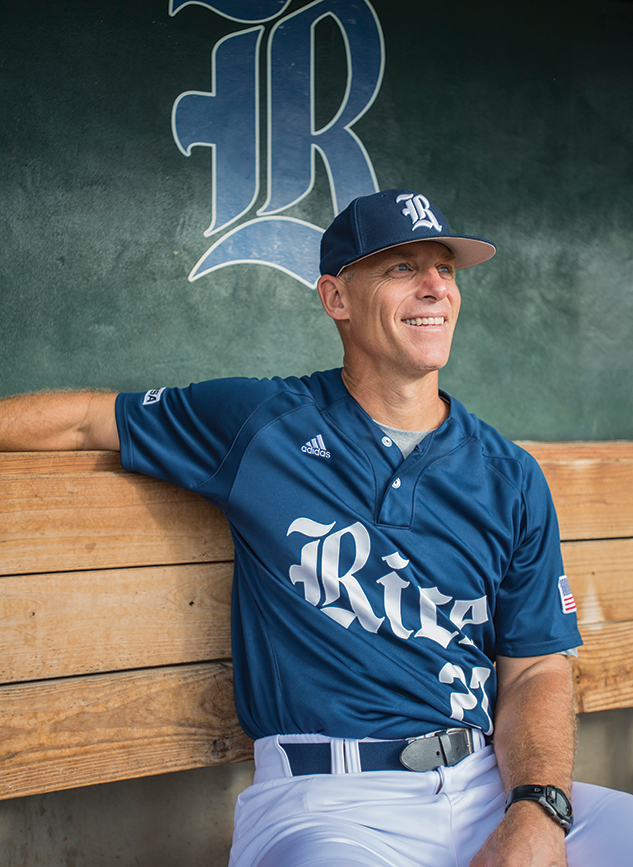 “In any count before two strikes, you’re hunting fastballs,” Matt Bragga says, describing the plan his hitters will take to the plate. He flips over a notebook and draws the strike zone, dividing and numbering each section, one to nine. At the most basic level, he wants his players to look for pitches in zones five and six — middle away. He’s always ready to coach at a moment’s notice.

“When a guy gets to the plate, he needs to be on autopilot. We need the plan to be so ingrained that they’re not thinking about it. It’s a part of who they are,” Bragga says. It’s easy to see why athletic director Joe Karlgaard and the Rice administration tapped Bragga to succeed Wayne Graham as the next head coach of Rice baseball. For one thing, he’s good at first impressions. His passion is contagious; his energy, electric. It’s the first thing anyone notices about him.

“I don’t think I’ve ever had a conversation where Coach Bragga stayed in his chair the whole time,” says Paul Janish ’05, an assistant coach for the Owls, nine-year major league veteran and member of Rice’s national championship team in 2003.

Then there are Bragga’s credentials. In 15 seasons as the head coach at Tennessee Tech, he won 446 games, the second-most in school history; won Ohio Valley Conference Coach of the Year four times; made three NCAA Tournament appearances; and set a school record for wins (53) in 2017. His calling card has been a high-powered offense. Last season, his team led the nation in eight offensive categories, including batting average, runs, home runs and on-base percentage.

In taking over for a living legend, Bragga may have the hardest job at the university. Under Graham, the Owls won the school’s only national title and made seven College World Series appearances and 23 consecutive NCAA Tournament appearances.

“I have high expectations. This program needs to be back in Omaha, where Coach Graham had it many, many times,” says Bragga, who has spoken to Graham on multiple occasions, even getting a personal tour of the facilities from the Rice legend. “I have the utmost respect for what Coach Graham has done. We’re going to continue the legacy that he built. I believe that with every bit of my being.”