Adrienne Simões Corrêa is on a quest to engage landlocked Rice students in the study of coral reefs — complex and fragile ecosystems found in tropical marine environments. As a faculty lecturer in ecology and evolutionary biology in Rice’s Department of BioSciences, Corrêa teaches Coral Reef Ecosystems and Introduction to Aquatic Ecology with Scuba Lab. In 2014, she was the recipient of a Brown Teaching Grant in support of teaching coral reef ecology. 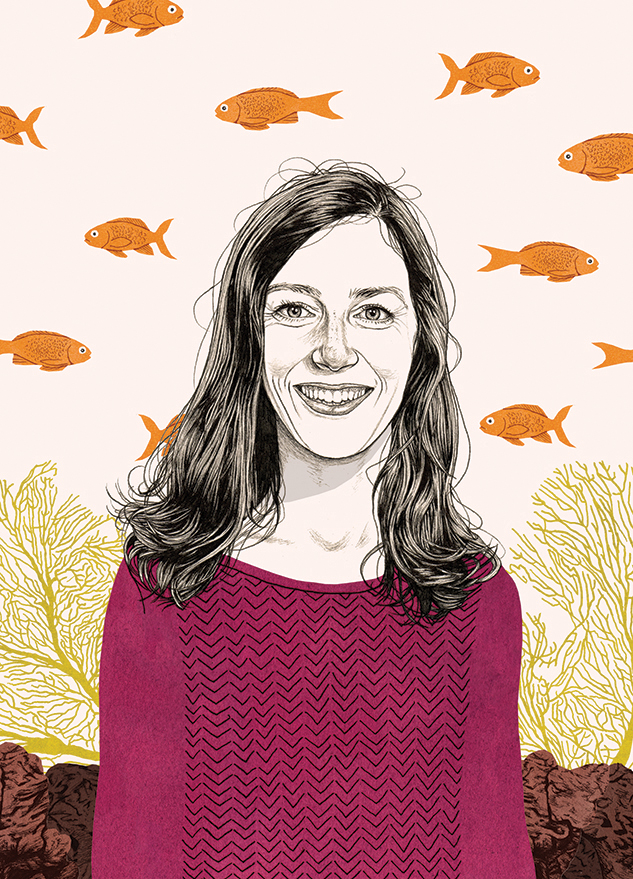 A coral colony on the reef is part rock, part animal and part plant. The rock part is a calcium carbonate, a limestone skeleton that the living coral animal lays down. It calcifies a little cup for itself, a corallite, and the living animal sits inside of that. The coral tissue in a colony is all one genetic individual. The reef itself is this massive limestone structure that can extend sometimes for kilometers, made up of these different colonies and other organisms, like sponges. All of this supports a massive diversity of life.

My research focuses on symbioses — some help coral reefs grow large, others contribute to coral death and destruction. I’m particularly excited about the small algae that live inside of coral tissues, photosynthesize sugars and dump them into their animal hosts. Corals then use that energy to build large reef frameworks.

On the dark side, I’m fascinated by coral viruses and animals that bore into and break apart reefs.

Shallow water coral reef ecosystems occupy less than one percent of the ocean floor, but they harbor more than 25 percent of marine diversity, including about 5,000 species of fish. They also protect shorelines, so if you have hurricanes or tsunamis coming in, coral reefs will take some of the brunt of the wave energy that’s associated and reduce the amount of shoreline that’s eroded. Many coral reefs are in decline due to human impacts. It’s death by a thousand cuts. I want to understand and help limitreef degradation.

THE MORE YOU LOOK AT CORAL REEFS …

When you’re watching a documentary about coral reefs, you’ll see beautiful images with lots of organisms in them — waving sea fans and coral heads, fish and maybe a shark. When you go out and start looking specifically at a reef “benthos” or the reef floor, there’s even more complexity. If you have the opportunity to get up close to a single coral head in person, you’ll see how many different organisms are packed into this really small space. It’s pretty fascinating.

You can learn a lot in the classroom. But, for me, one of the things I enjoy about Rice is the support we get to develop curricula that take us out into the field or the lab experiencing authentic elements of the biosciences. We have courses that use some traditional classroom elements with complementary courses that will take you out in the field.

In both classes, I use these giant 2-D coral reef banners. They show areas of reef benthos, printed at 1:1 scale on 8-by-12 or 7-by-11 foot outdoor waterproof advertisement banners. In the lab, we purposefully work with those in the pool, before we work in an outdoor environment. I give students the challenge of trying to get the banners into the pool and sink them. That’s my first chance to let them know that getting the job done out on the reef will often involve something technically challenging underwater. It may not involve your prettiest diving move, but as long as you work safely, you just get itdone. Under good conditions, scientific diving is a lot of fun in its own right. It is physically and mentally challenging. As a bonus, it also helps you develop handy life skills, like focus, planning ahead, communication, etc.

I WOULD LOVE TO TAKE STUDENTS …

to see the real Flower Garden Banks National Marine Sanctuary (FGBNMS) after they have worked with the 2-D coral banners depicting FGBNMS. It has some of the highest coral cover on the Atlantic side, and it is right near us. That would be incredible.

ON DIVING IN BELIZE

I co-teach Tropical Field Biology in Belize with evolutionary biologist Scott Solomon, where we spend one week on a coral reef doing field ecology and one week in the rain forest doing analogous work in a terrestrial setting. For the reef, I always emphasize to the students that we’re diving around the second largest barrier reef in the world. It’s a UNESCO World Heritage site, an atoll that contains 800 patch reefs. It’s gorgeous, and while we are there, we might see one other boat. That doesn’t happen on more accessible reefs in the world.

WHAT SHE SEES WHEN SHE SEES THE SEA

One of the reasons that I was drawn to the ocean is that you can stand on the beach and look at the water and have no idea what might be under the waves.