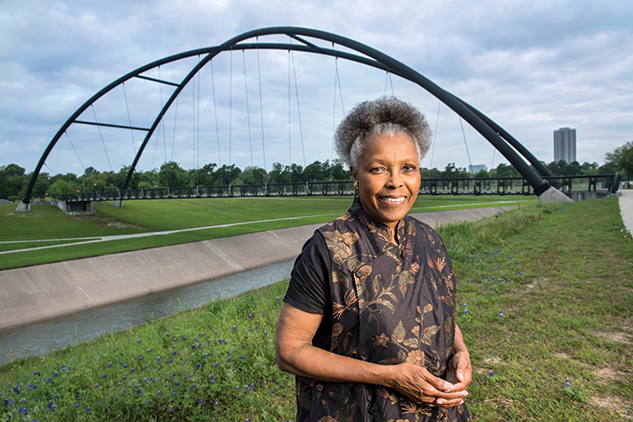 Carroll Parrott Blue is a big fan of collaboration. The award-winning filmmaker and scholar has devoted much of the last four decades to documenting neighborhood histories by bringing together those who live, work and study in those communities. A decade ago, Blue employed a then-new technology to preserve the stories of the Third Ward — story mapping, which plots the oral histories of residents captured on audio or video on a map of the area. With the help of Rice, she has been using similar technology to tell the stories of Hurricane Harvey. A recent story map, “Damaged and Defiant: Houston Stories,” was published in the Houston Chronicle in December.

Blue began the project by sifting through 200 oral histories of Hurricane Harvey — along with the help of Houston Chronicle staff, software company ESRI, University of Houston’s Bauer College of Business and others. In the end, Blue and her team selected 45 stories, each plotted with ESRI’s ArcGIS software on a map of Greater Houston and tied to the exact location where it was first told.

The map shows short narratives gathered by Chronicle staffers from people across the area — from Crosby to Kingwood to Katy — each a unique perspective on the storm; told together, they’re the collective account of a city that experienced one of the worst natural disasters in U.S. history.

“Everybody flooded — the rich, the poor, the in-between, the immigrants — no one was spared,” Blue said. “Houston has now become a different kind of city, and that’s one reason why this project is important.”

For Blue, being a visiting scholar at Rice was instrumental in bringing these story maps together for the Chronicle — and not just because of the mapping expertise available at Fondren Library’s GIS/Data Center or the resources at the Digital Media Commons.

“What Fondren has done is given me the freedom to do the work,” she said.

As one of the Lynette S. Autrey Visiting Scholars at the Humanities Research Center between 2016 and 2017, Blue also worked closely with Fondren on creating a map that showed a toxic waste dump’s alarming proximity to two schools and two parks.

Blue is now Rice’s 2018 Center for Engaged Research and Collaborative Learning scholar-in-residence at the African American Library at the Gregory School and Fondren Library’s Woodson Research Center Special Collections and Archives. She is producing an upcoming story map for the Chronicle — this one focused on two of Houston’s toxic waste sites and their vulnerability to floods.