The Life of Facts

By Roxana Asgarian  •  2 years ago

The Life of Facts

Since the 1980S, Scientia, a faculty-led institute, has engaged distinguished Rice faculty and noted researchers in a series of thought-provoking lectures. This year’s colloquia take on the contentiousness of facts.

On Jan. 20, 2017, Donald Trump took an oath of office and was sworn in as the 45th president of the United States. The crowds, according to White House staff, were enormous. “This was the largest audience to ever witness an inauguration, period, both in person and around the globe,” then-Press Secretary Sean Spicer told the White House press pool two days afterward.

President Trump had raised the issue of the crowds himself. The day of the inauguration, many news networks showed an aerial shot of the National Mall juxtaposed with the same image from Barack Obama’s 2009 inauguration, which made clear that the new president’s crowd was dwarfed by that of the former president.

“I turn on one of the networks and they show an empty field,” Trump said to the media on the second day of his presidency. “Wait a minute, I made a speech. I looked out, the field was — it looked like a million, a million-and-a-half people.”

News outlets published more photos and video evidence. They tallied the public transport numbers in Washington, D.C. In a now-famous exchange with Chuck Todd of “Meet the Press,” in which he pressed Counselor to the President Kellyanne Conway to explain the falsehood, Conway said, “You’re saying it’s a falsehood. … Sean Spicer, our press secretary, gave alternative facts to that.”

Thus was ushered in our current era of “alternative facts,” a topic that’s been the subject of countless news stories, heated opinion pieces and social media wars. In this moment of hand-wringing, some Rice scholars have taken a different approach to the topic. To them, it’s a perfect moment to think critically about facts. 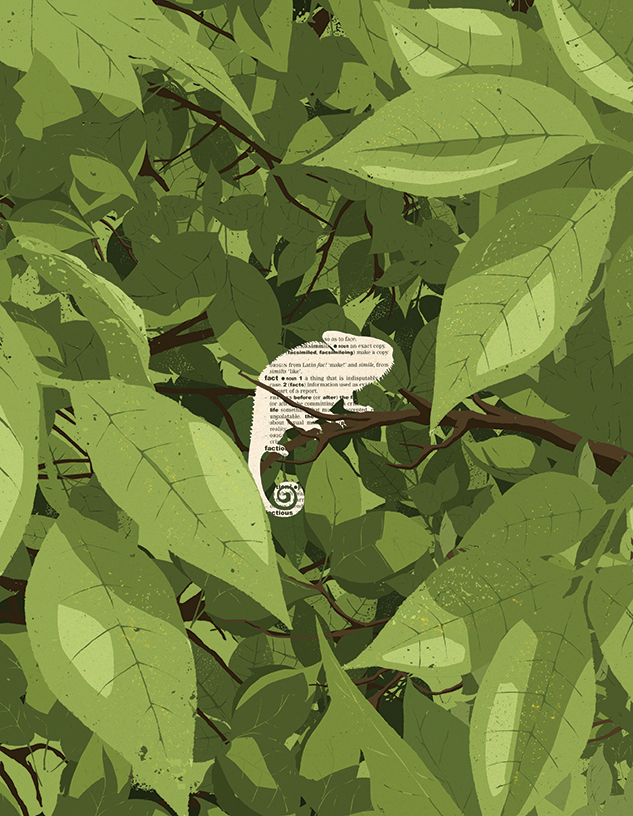 Rice President David Leebron doesn’t think “alternative facts” is a particularly contentious notion. Leebron is a lawyer, after all, and practicing law, at its most basic level, consists of two sides arguing about which notions of fact are most correct. “I was puzzled by the reaction to the words ‘alternative facts’ in a way,” he told a room full of listeners at Duncan Hall earlier this semester. “We live in a world of alternative facts and alternative stories, and that’s why we have triers of fact, and people to make those decisions.”

The law has structured processes, Leebron said, that decide facts: rules of evidence, burdens of proof and an authority, like a judge or a jury, to reach a conclusion. The problem with Conway’s assertion, Leebron said, “wasn’t that there could be no alternate facts, but that there was no alternative evidence.”

Leebron’s talk was part of a yearlong series of colloquia that explored the idea of facts from the perspectives of law, science, philosophy, psychology and political science. The series is sponsored by Scientia. Members of the Scientia committee pick a topic each year to explore from various viewpoints. Previous years’ colloquia topics included privacy, inequality, ideas, failure — broad concepts that can be looked at in different and surprising ways.

This year’s colloquia, simply titled “Facts,” were designed to ask a number of pertinent questions: What is a fact? How do we decide that certain information is reliable? What standards of evidence should we use? Who cares about facts? During the 2017–2018 academic year, seven distinguished thinkers sought to tell the truth about facts.

Four of this year’s speakers were Rice faculty. The series also featured Katharine Hayhoe, the director of the Climate Science Center at Texas Tech University; Elizabeth Loftus, a psychology and law professor at the University of California, Irvine and an expert in memory; and Johanna Dunaway, an associate professor of communication at Texas A&M University. (All presentations were recorded and posted at scientia.rice.edu.)

“We live in an age where facts are apparently in dispute, so we thought, who better to talk about facts than the people who try to use them all the time?” said Rick Wilson, the Herbert S. Autrey Professor of Political Science and current director of Scientia. “Our primary charge is to make sure people from around campus get rid of their disciplinary blinders for an hour.”

Scientia started with a tussle over a library book. In 1980, Salomon Bochner, who was a professor of mathematics at Rice, wanted to use the collected works of German mathematician and astronomer Johannes Kepler in his research. Rice historian Albert Van Helden was researching the history of astronomy and also wanted the book. There was only one copy and, according to an account of the group’s history by one of its founding members, Ronny Wells, a “modest conflict” ensued. The university proposed that they form an institute; in this way, they could get a dedicated room in Fondren Library and share the book there.

Bochner and Van Helden christened the institute Scientia. The group has remained small and dedicated — in the 1980s, the initial membership totaled five, and now there are about 20 faculty from a range of disciplines. “Since we specialize in looking at important topics through this interdisciplinary lens, we want representation from members of all different schools — architecture, engineering, music,” said Susan McIntosh, who has also served as a Scientia director.

Sarah Whiting, the dean of the School of Architecture, discovered Scientia when the group approached her to give a lecture; she found herself continuing to attend the talks, enjoying a rare opportunity to get to know faculty in other disciplines. “These talks are a moment where there’s no obligation, yet it’s a chance to connect across campus. It’s a solid group of super-interesting people from other disciplines, and I always have great conversations with them.”

The Truth About Facts

While it seems obvious that a fact is “a piece of information presented as having objective reality,” according to Webster, facts are actually a muddled mess that exposes the complex way we take in information. It starts with the word fact itself, which shares a Latin root with the words manufacture, factory, facilitate — meaning to do or make. Rice philosophy professor Richard Grandy, in his lecture “Theories About Facts,” argued that the root of the word is crucial to understanding how facts work in our brain. “We can better grasp what facts are and why they have authority if we can understand them as manufactured, rather than found or created,” Grandy said.

What we understand as a fact isn’t inherent in the fact itself, he added. Rather, it’s the complex result of how our minds process the information, which is influenced by our memories, perceptions, ability to reason and the social information we’ve been logging throughout our lives. Thus, a fact is more of a changeable thing than many believe. “Most of what we believe strongly is probable, not certain,” Grandy said. “‘Fact’ has too much of a connotation of certainty. ‘Theory’ has too much of a connotation of speculation. We don’t have a word for a theory that’s been tested and is highly probable based on a great deal of reliable evidence gathered in an informed, relatively open-minded way.”

In science, even theories that have undergone rigorous testing and have achieved near-universal agreement still aren’t accepted by the larger public as fact. In her lecture, Hayhoe said there are 26,500 separate indicators of a warming planet.

“The world is getting warmer. That is a fact,” she said. Hayhoe pointed to research showing that burning fossil fuels led to a warming climate that dated back to the late 1800s. NASA said that 97 percent of climate scientists agree on climate change, yet in 2014, Senate Majority Leader Mitch McConnell said, “For everybody who thinks it’s warming, I can find somebody who thinks it isn’t,” adding, “Each side has their scientists.”

Why, in this case, can’t facts sway the unbelievers? “We are not blank slates, waiting for the correct facts to be written on,” Hayhoe said. “Whom we associate with, whom we identify with, is the No. 1 predictor of our opinions on climate change.”

That tendency to entrench with people who agree with us isn’t new. In his lecture on rhetoric and conspiracy theories, Wilson pointed out that there has been liberal use of both tactics throughout time. But with the internet and social media disseminating information — and misinformation — around the world with lightning speed, we’ve reached a point where there is easy access to “each side’s scientists,” and a firmer barrier between the truth and the person who doesn’t want to hear it.

“Politics isn’t about truth, it’s about power,” Wilson said. The goal of political rhetoric, whether it be to undermine the opposition, rally the base or misdirect away from one’s own bad deeds, is often successful. And, he points out, conspiracies do indeed happen (think Watergate). “There’s a need for vigilance and a need for skepticism. The same thing is true of conspiracy theories,” he added. “There are many more of those than there are conspiracies.”

And in a White House that seems suspect of facts and susceptible to conspiracy theories, it becomes harder to get the correct information at the table where the policy decisions are being made. Neal Lane, senior fellow in science and technology policy at Rice’s Baker Institute for Public Policy, formerly served as director of the National Science Foundation, where he advised the Clinton administration on matters like stem cell research and the Human Genome Project. “Facts and truth matter when crafting policy, but they’re not enough. Facts get muddled accidentally and on purpose,” Lane said. The key, Lane said, is to be able to translate between the realms of science and policy, explaining clearly why the science matters from a political standpoint. That task, in this political climate, is harder than ever.

Adding to this already muddied water, where facts become malleable depending upon who’s wielding them, there’s the real problem of what you — personally — know to be true.

Loftus used her lecture to explain just how faulty our memories can be. “Do you think that I could make you remember things that didn’t happen?” she asked the room. She explained the research of her team and others, which includes planting false memories in subjects, sometimes of consequential events. The ability to manipulate memory or misremember important facts can have dire consequences — of the 354 cases of wrongful conviction the Innocence Project has found, 70 percent of them involved eyewitness misidentification. “Memory, like liberty, is a fragile thing,” Loftus said.

Winding through the talks at Duncan Hall are a couple of shared threads — facts are vital to our human understanding of the world, and they are much more nebulous than we think they are.

“In this world of complexity around facts, we have to have a whole range of mechanisms, and each discipline may need its own system of mechanisms,” Leebron told his attentive audience. Still, there’s a danger when even basic facts are up for debate. “This whole notion of contestability and doubt that has crept into our notion of what a fact is threatens us in some way,” Leebron said. “Because if you don’t have some idea of shared truth, then you really have a problem in society.”

It’s pretty clear that it’s not “just the facts, ma’am,” as Joe Friday’s famous saying from “Dragnet” goes. Or, as Leebron pointed out in his lecture, how we think the saying goes. It turns out, the real quote is, “All we want are the facts, ma’am.”  A tall order, indeed.

WATCH: The faculty and guest lectures of the 2017–2018 Scientia series on “Facts” can be viewed here.