By Kendall Schoemann  •  2 years ago

Night Owl is a series that profiles Owls whose work takes flight at night.

“I understand that before I even started talking most of you already didn’t like me, and that’s OK because ’80s movies have taught you not to trust someone with my hair and bone structure,” said Matthew Broussard ’10 in introducing his stand-up set on “Conan” in July 2016. “I recently joined a support group for people who peaked in high school — it’s called CrossFit.”

Broussard, originally from Atlanta and currently residing in New York City by way of Los Angeles, poked fun at the fact that he looks more like a quintessential high school quarterback than a hip comedian. “I try to have fun with it though,” he said in his set that aired on Comedy Central’s “The Half Hour” in October 2016. “During my lunch breaks, I like to throw on a letter jacket and stop by local high schools and cruise the cafeteria.” 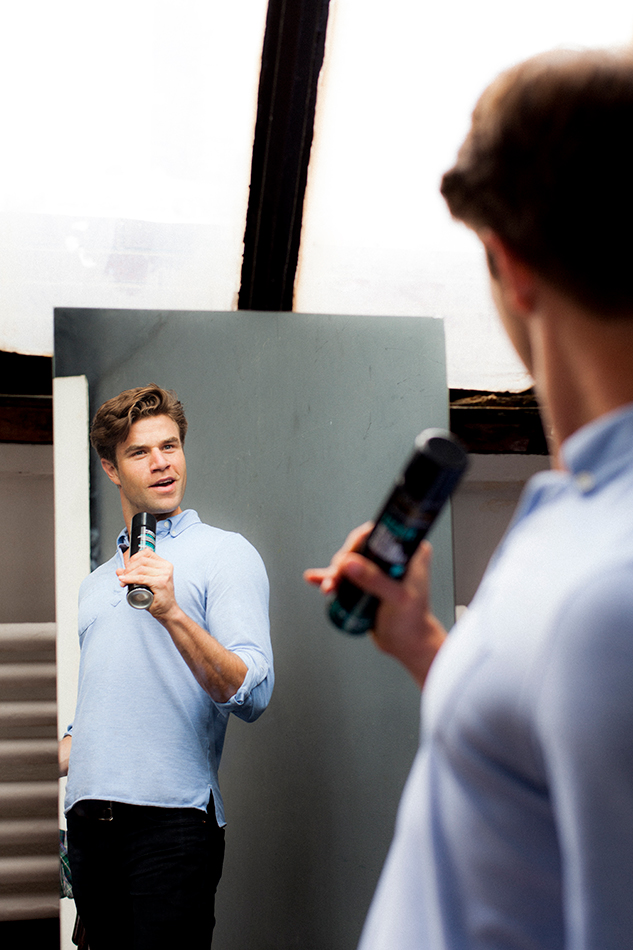 Back in 2010, as a recent grad with a degree in computational and applied mathematics, Broussard had never taken an improv class, dabbled in theater or attempted stand-up comedy. He took a job as a financial analyst and, on a whim, decided to try an open mic night. “I started the way anyone starts stand-up — I showed up at a random open mic with three to five minutes of material,” Broussard said. “I tried it and didn’t totally bomb, so I kept doing it.”

Bored at his day job, Broussard also began sketching word puzzle puns and posting them to social media. They were so well-received, he launched a webcomic, “Monday Punday,” where he posts a new word puzzle every Monday. “In high school, one of my teachers had this inventory of word puzzle puns that we would start the class with,” he said. “I would draw those for her and kept doing them casually when I had the time. They’re meant to be challenging, and they tend to catch on at places like Rice.”

In 2012, just a year after his first open mic performance, Broussard won The Laff Stop’s Houston’s Funniest Person Competition. “That was a wake-up call to me — I realized there was a chance I could succeed at this if I worked really hard,” he said. “I told myself I would move to Los Angeles a year later.”

And he did. Broussard’s knack for academically charged jokes led him to apply to the college circuit, and that success supported his move. “The college crowds are really smart, and you tend to develop your jokes around your audience,” he said. “The focus of my first album, ‘Pedantic,’ was to see how much academic material I could squeeze in and still have an entertaining hour of comedy.”

A few years after moving to LA, Broussard landed an appearance on “Conan.” Broussard said there were several milestones that led up to his comedic success. While still living in Houston, he got a showcase in Cap City, a comedy club in Austin. That showcase led to a Comedy Central set, which landed him representation. “Doing Comedy Central’s ‘The Half Hour’ was a really surreal moment — it was something I watched as a kid,” he said. “And with my ‘Conan’ set, my goal was to see how much of the set I could fill with gynecology jokes — three minutes and 50 seconds out of my five minutes were medically accurate vagina jokes, which is one of my prouder moments.”

Because Broussard’s parents are both scientists and somewhat leery of their son’s comedy career, he tries to create comedy that’s on the nerdy side. “Rice taught me the value of knowledge and learning that I try to take with me into stand-up. I like jokes that may educate you on something you didn’t know before.”

Broussard’s creative process for writing academic jokes typically starts with research. “I’ll go down a research wormhole and start to notice interesting things,” he said. “Typically the details that are funny are minute — things right under the surface that go unnoticed. One of the jokes on my last album was about the revelation that every part of the female anatomy that is named after a person, is named after a man. I found that funny and started to write around that. I think there’s so much untapped humor in academic subjects.” He also uses Facebook and Twitter to gauge reactions to jokes before potentially incorporating them into his set.

On gig days, Broussard’s schedule starts late and ends early. “There’s no regularity to my schedule, but a show that starts before 8 p.m. is rare and undesirable,” he said. After getting in a workout, he typically spends his time before shows drawing “Monday Punday” or sculpting to “open up” his brain, working on jokes or going to auditions. He also takes the occasional acting gig.

Broussard plans to keep building his stand-up career in ways that allow him to both entertain and educate audiences. “Comedian satirists have become the most respectable [news] sources — the people we turn to most quickly.”