Software engineer Travis McPhail ’04 helps create better mapping technologies for Google. But recently, these skills have taken him down a very different path — helping visitors explore the past at the National Museum of African American History and Culture. 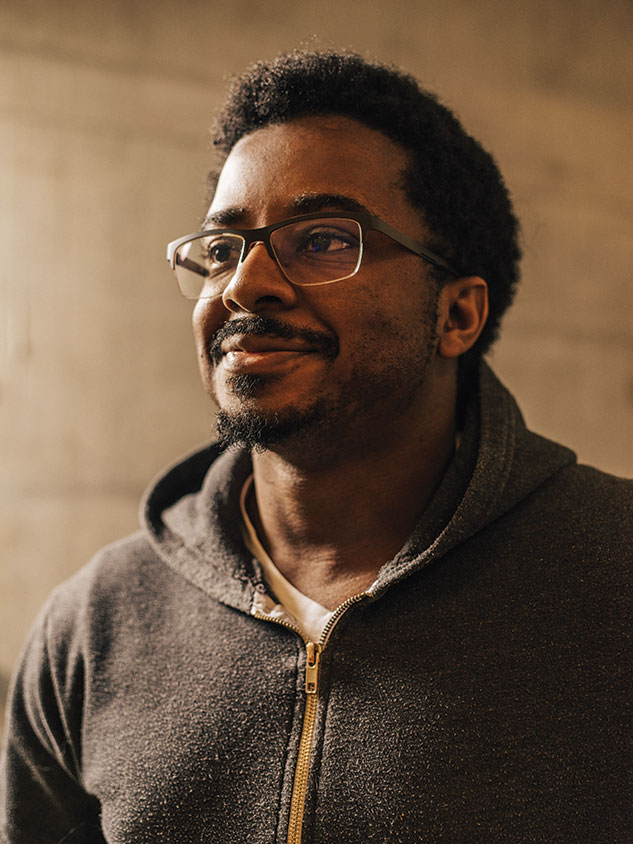 The National Museum of African American History and Culture, which opened to acclaim Sept. 24, 2016, houses thousands of rare and valuable artifacts, ranging from Harriet Tubman’s hymnal to a trainer plane used by the Tuskegee Airmen during World War II — each one telling a story of key moments in African-American history. But when Rice alumnus Travis McPhail ’04 visited the museum in the days before its official opening, one pop culture touchstone caught his eye.

“The very first time I went in there, they were putting up the ‘Mothership.’ I was like, ‘Is this the infamous Mothership that was onstage in the 1970s for all these lovely concerts?’” he said, referring to a larger-than-life prop that was a regular feature at George Clinton and Parliament Funkadelic concerts. Indeed it was. “It’s smaller in person than I thought,” McPhail recalled.

As a Google software engineer who works on improving digital mapping technologies, McPhail had never been involved in museums, their artifacts or the museum experience — except as a visitor. So when Lonnie Bunch, director of the museum, visited the tech giant’s Mountain View, Calif., campus in late 2014 to talk about his vision for the new museum, McPhail was intrigued. Bunch reviewed the 100-year quest to establish the museum, which dates back to 1915 when African-American Civil War vets called for construction of an African-American history museum. Then he asked the invited audience — members of the Black Googler Network, a diversity resource group at Google — to help. “He asked us to reimagine what a museum would be like in the modern age,” McPhail recalled.

“There are not many opportunities in life where you actually get to play a part in a major point in history,” he said. “The museum was telling the story of my family and people whom I know. I felt a duty to do this.”

McPhail gathered a dream team of user experience specialists, software engineers and other members of the Black Googler Network. The volunteers approached the challenge of adding cutting-edge technology to the museum systematically, targeting the “pain points” that needed solving first. They gave their project an informal name — Project Griot, after a traditional West African word for historian and storyteller.

The first problem the Googlers noted was one of space, he said. Although the museum is large enough to display such blockbuster artifacts as a 77-ton Jim Crow-era railroad car, a 21-foot-tall tower from the notorious Angola Prison and the iconic stage prop, its collections comprise many more historic artifacts than can be displayed at any one time. In fact, the five-story, 350,000-square-foot building only has enough room to display about 3,500 items from its overall collection of more than 40,000 artifacts.

Though 350,000 square feet may sound spacious, that’s not much room for 40,000 objects, noted W. James Burns, chairman of the American Museum Alliance’s Curators Committee. Burns estimated that most museums are lucky to display more than 3 percent of their overall collection at any given time and often rotate items in and out of storage. “It’s just a matter of dollars and cents,” Burns said.

McPhail and his team attacked another big challenge in museum exhibition displays — the difficulty of creating an exhibit that wouldn’t quickly become obsolete or dated. “Typically when [display companies] work with [museums], companies provide some sort of technical solution,” McPhail said. “They agree on what that solution is and the tech is frozen from that point on. The content of that interactive exhibit doesn’t change unless there’s a contract for the company to come back later on.” McPhail not only wanted the group to find a tech-oriented solution to both issues, he also wanted to help the museum tell more stories and cover more of the history that is “critical to the founding of the nation.”

He started by looking for existing technology to repurpose. “Hey, we’re Google,” McPhail told himself, “we should be able to help the museum share more of the artifacts they have in their collection and tell the stories in a more meaningful and interesting way.” The team considered and rejected the use of 2-D smart glass and having a display where smartphone users could manipulate the artifacts. Next, they looked at scanning. The museum was already scanning in 3-D, but using much slower equipment. Artifacts that would take the museum up to several hours to scan could easily be done in about eight minutes on Google’s equipment.

McPhail’s team opted to create a 3-D interactive experience that would attach meaning to artifacts by telling the stories behind each one. The visitor sees a touch kiosk with a 3-by-3 grid of screens that allows them to explore each stored object by zooming in or out and rotating them to interesting spots on the artifacts. The exhibit also uses those items as jumping-off points to take visitors on journeys that help them understand how each piece represents an intersection between African-American history and U.S. history as a whole, McPhail said.

Katy Kendrick, exhibitions curator, chose smaller objects that would scan well and represent a cross section of the museum’s rich collections. “The use of 3-D technology is relatively new, and to have it applied in a museum setting is new for us here,” she said of the collaboration.

One example of what’s on display is a small tin labeled Madam C.J. Walker’s Wonderful Hair Grower — one of many offerings in a line of early 20th-century beauty products for African-American men and women. Viewers will not only be able to rotate the object to view it from all sides, they’ll also be able to read about Sarah Breedlove [C.J. Walker], who pioneered a successful manufacturing business and became a millionaire.

Another scanned object to explore is a hat designed by beloved milliner, Vanilla Beane. “She’s still going strong,” Kendrick said of the 98-year-old hatmaker. “We have several of her hats in the collection.” Also in the interactive, visitors can examine a pair of boots from the groundbreaking Broadway musical, “The Wiz,” and a sculpture titled “Head of a Negro Woman” (1946) by artist Elizabeth Catlett. “The detail and texture you can see in these renderings are amazing,” Kendrick said. 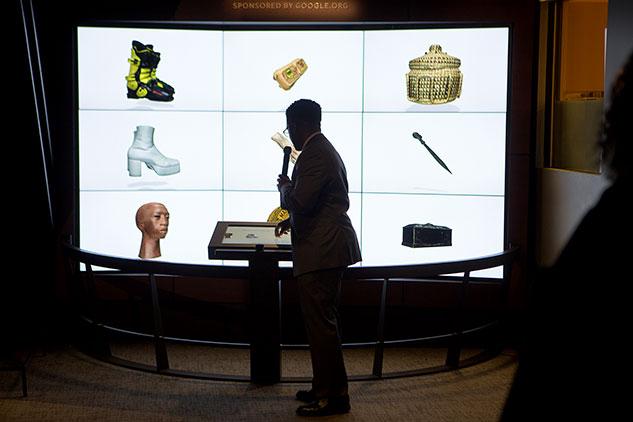 McPhail introduces the new 3-D interactive exhibit at the National Museum of African American History and Culture on Feb. 2.

The advantages of a 3-D system for artifact display are numerous, McPhail said. First, “everyone can get a better appreciation of the physical object in its entirety, including seeing nuances and characteristics. There’s a lot more context to the stories behind the object,” he added. The team created a back-end system that will allow curators to add more features to the display, such as movies, videos, pictures or even trivia questions about the object. Being able to update the exhibit as needed or as more information becomes available “is new territory for a museum,” McPhail said.

Having the flexibility to change and update objects in the interactive is something that Kendrick is also looking forward to. “We have a pool of about 30 that we scanned as part of this pilot,” she said.

With the Google employees volunteering off-site and the challenges of creating a brand new kind of interactive exhibit, the original spring 2017 opening was delayed. The postponement, however, worked to the exhibit’s advantage, McPhail said, giving the team time to see how the public interacted with the new museum and to figure out what impact the exhibit would have on the museum space as a whole.

“The curators, designers and architects for the museum could have a better perspective on how the tech could fit into their space, because they had more time to thoroughly think about the project as opposed to being rushed,” he said. “We came out better on the other side because of that.” The interactive opened to the public Feb. 2, 2018 in the museum’s second-floor “Explore More!” area — a space dedicated to educational and interactive experiences. 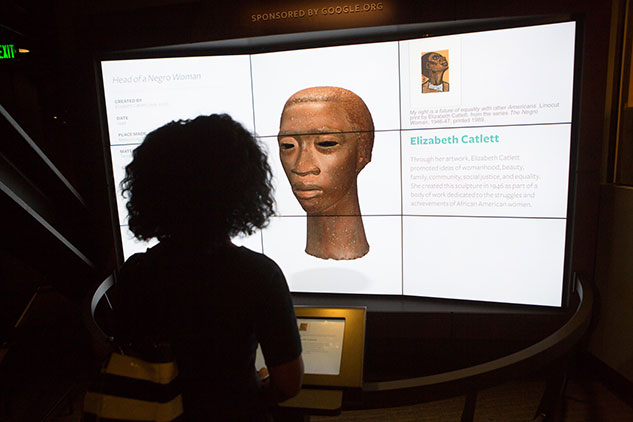 Judging from the museum’s attendance numbers — a million visitors in its first few months and so much interest that the Smithsonian had to implement a timed-entry pass system to regulate traffic — museumgoers are eager to experience the complex narrative of African-American history. McPhail’s Google team has played an integral part in bringing the lessons of these precious objects to life.

One example of their work is the display of a small tin labeled Madam C.J. Walker’s Wonderful Hair Grower — one of many offerings in a line of early 20th-century beauty products for African-American men and women. Viewers will not only be able to rotate the object to view it from all sides, they’ll also be able to read about Sarah Breedlove [C.J. Walker], who pioneered a successful manufacturing business and became a millionaire.

McPhail’s Rice education — which includes a Ph.D. in computer science, a  master’s and two undergraduate degrees — came in handy during the process thanks to his focus on graphics research and graphics programming, and his extensive experience with 3-D modeling and scanning technology. The former Brown College resident is still in touch with mentors on campus. And Google, he noted, hosts lots of interns from Rice’s Department of Computer Science.

“Before this project, I really didn’t put a good deal of thought into what my legacy might be,” he said. “But as I look at my contributions to showcasing the extraordinary things that ordinary people did in their lives, it’s humbling. A small bit of the work that I do will help document the history of America through the lens of the African-American experience.”

That legacy is personal for McPhail, too. He and wife Ana McPhail, Ph.D. ’14, welcomed their first child last spring. “I’m looking forward to being able to take my son to the exhibit,” he said. “I want to see how he takes in the experience.”