Through the Sallyport — Or Not

Through the Sallyport — Or Not 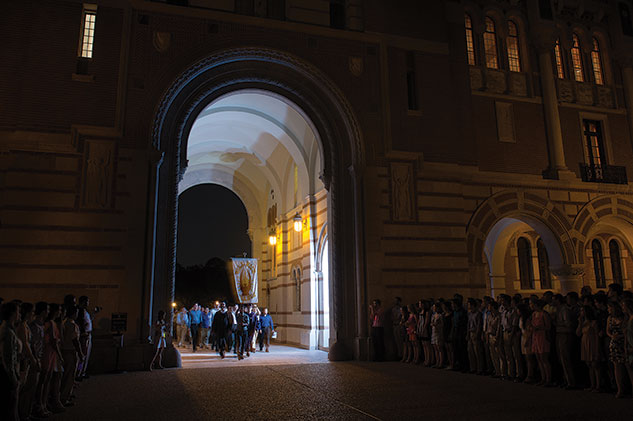 When you visit Princeton University as a prospective student, tour guides point to an ornate metal gate and describe a tradition: Incoming freshmen enter the gate and are forbidden to traverse it again until they graduate. Brown University tour guides will show you a stone gate with the same narrative. Sound familiar? If you graduated from Rice before the early 1990s, probably not. But more recent alumni know that an “age-old” tradition prohibits Rice students from using the Sallyport from their matriculation until the day of their graduation.

How did this tradition arrive at Rice? A cynic might suggest that somebody with Ivy League envy simply imposed it on Rice undergrads. But the truth appears to be less straightforward.

The annual commencement ceremony was moved to the quad in 1986 after decades of being held Saturday night in Founder’s Court — just on the other side of the Sallyport. The evening had become a circus, thus prompting the move, said Bob Patten, the Lynette S. Autry Professor Emeritus in Humanities and Professor Emeritus of English, who served as head marshal for the better part of 30 years.

“The early colleges got drunk and disorderly, parents couldn’t take good pictures in the dark and various pranks were practiced on President Hackerman,” Patten recalled. “One student left Hackerman shaking a department store dummy’s hand and arm; another tried to pie him; several wore nothing under their robe and let us know that.”

A couple of academic committees looked into the matter, and it was eventually decided that commencement should be moved back to the quad where it had been held in the Rice Institute’s early days. On Saturday morning, graduating seniors would exit the quad via the magnificent arch through Lovett Hall with their diplomas in hand.

Another change contributing to the Sallyport tradition was the decision to move matriculation. In the late 1980s, incoming freshmen gathered on the Founder’s Court lawn and marched through the Sallyport to join their respective colleges. That custom didn’t last long because, according to Greg Marshall ’86, “the pranks the students pulled at the ceremony escalated from releasing live chickens into the audience to rappelling down the side of Lovett Hall to a nude Lady Godiva riding by on an actual horse.”

But the “symbolism of ‘entering Rice’ through the Sallyport and exiting again as Rice graduates,” Marshall believes, begat the notion that students were not to use the Lovett Hall shortcut during their undergraduate years. By 1992, the tradition had taken hold. Because the early 1990s are a good quarter century behind us, Marshall noted, the tradition is viewed as embedded in history.

Melissa Kean ’00 greatly assisted in this research by posting about the current
Sallyport tradition on her blog, Rice History Corner. Read the lively debate that ensued: ricemagazine.info/sallyport-traditions.