John “Grungy” Gladu has been a fixture of Rice’s Marching Owl Band since he joined in 1973. To some MOBsters, this means he has become an essential part of the MOB, perhaps even embodying the spirit of the satirical band. However, Gladu disagrees. “I don’t feel that extraordinary. I’m just a guy who stuck around,” he said.

Nevertheless, his track record as a trumpeter in the MOB is long and varied. He originally joined the MOB because Houston Baptist College, the university he attended at the time, did not have a marching band. Gladu remembers Robert Linder, an HBU band director who told his class that if they missed participating in marching band, they should talk to Bert Roth at Rice University. Roth was the director of bands from 1967 to 1980. Gladu rode his motorcycle to the Rice band hall in the Rice Memorial Center basement and signed up that day. Since then, he has worn many hats for the band, including script coordinator, librarian, announcer and leader of MOB cheers. Outside the MOB, Gladu provides desktop support for a medical school department. 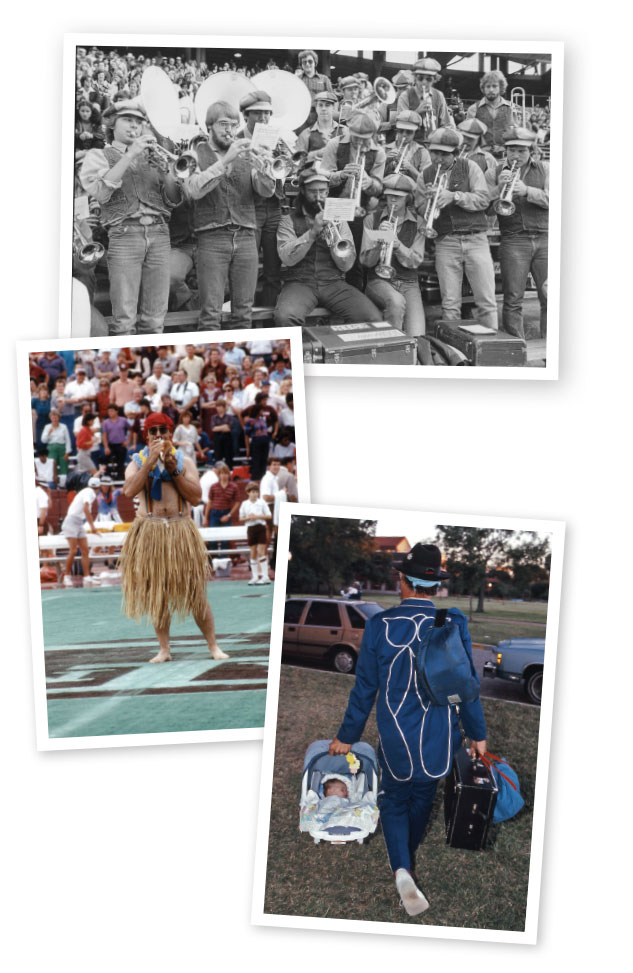 When looking back at his time in the MOB, Gladu reminisced about people, songs and games that stood out in his mind. Some of his favorite games were against Texas A&M, where the MOB had to choose their words wisely, and games against the University of Texas, where “you could do anything you wanted to them; they would love it.”

Gladu wishes that the MOB would bring back cheers, most of which were written by Andy Kopra ’77, including this so-called existential cheer: “We’re from Rice. Ain’t that nice? Who are you? Do you know?” However, he speaks highly of today’s band, praising the improved musicality and the close-knit family atmosphere. “The 1970s were full of slackers … and that’s how we wound up with 300 people in the band,” Gladu explained. The now-smaller MOB, he said, is full of people who really care about the band.

Despite never actually being a student or faculty member at Rice, Gladu’s presence is cemented into history with the new name for the band hall within the Cox Fitness Center, where the MOB moved last year. When asked how he feels about the John “Grungy” Gladu Band Hall, he listed many other people from the MOB’s history whom he thought would be deserving of the honor — people like Lee Chatham, the first director of bands at Rice, or Roth.

Gladu is more down-to-earth about his own place in the MOB, calling himself the “uncle, grandfather, adviser type.” He wants to keep playing in the MOB as long as possible but is happy with being the figure in the background about whom people say, “Oh, that’s just Grungy.” As long as he can stay within the MOB family, he is content.