By Kendall Schoemann  •  2 years ago 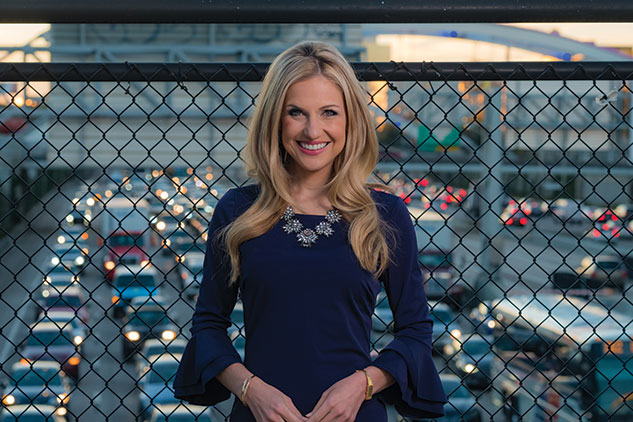 Long before sunrise each morning, Katherine Whaley ’04 wakes up to help drivers in the nation’s fourth-largest city navigate 575 miles of freeways and expressways. She has worked since 2014 as a traffic anchor for KTRK-TV ABC13 Houston.

Whaley’s weekday alarm goes off at 3 a.m. She gets dressed, puts on makeup, throws her hair in rollers and is on the road by 3:45 a.m. When she arrives at the studio, she begins a multitasking ritual of gathering traffic information, updating social media and sipping on tea while teasing and spraying her hair and touching up makeup.

Forty-five minutes later, she’s on the air for the “Eyewitness News” morning show until 7 a.m. and does local cut-ins every half hour during “Good Morning America” until 9 a.m. With no script to rely on, she keeps an eye on the traffic camera network to deliver the most timely and significant information. “There is an accident on the Gulf Freeway northbound at the 610 South Loop slowing down your inbound commute. Use Telephone Road as an alternate route. Current drive time on the Southwest Freeway inbound Grand Parkway to downtown is 24 minutes and the South Freeway inbound Beltway 8 to downtown will take you 17 minutes.”

While Whaley appears poised on screen, seconds before going on the air, she is juggling traffic camera angles and making snap decisions about which topics she’ll cover on her walk over to the green screen.

Her early career took her away from Houston, but it was always her goal to return to her hometown. “I feel I have a much stronger connection with viewers in a community where I really have a stake in what’s going on.” Her connection to Houston was especially strong during Hurricane Harvey, which Whaley says was the most challenging event of her career. “People were making decisions of whether or not to be on the road,” she says. “It was truly a life-or-death situation.”

ABC13 reported 118 straight hours of Harvey coverage. “I lost track of time, hours, days,” she says. “I was receiving hundreds of questions about rerouting, and I did my best to help everyone as road conditions and closures were changing minute by minute.”

While road safety and transportation are especially important during times of crisis, Whaley has found traffic to be an issue that connects people of all walks of life on a daily basis. “It’s been tremendously rewarding communicating information that so many people rely on every day,” she says. “Traffic is a quality-of-life issue — people decide where they live and which job schedule they work based on traffic.”

“Social media is something I was discouraged to check when I was starting my career, but today reporters are measured by social media reach and engagement,” she says. “Social media is another way to share information that our audience needs. People don’t always rely on a broadcast at a fixed time and we have to be nimble to keep up with how viewers are consuming information.”

On average, Whaley sends out 10–12 tweets per hour each morning. She also supplements her on-air time with live morning updates on Instagram and Facebook, often posting stills from traffic camera footage to show what’s contributing to delays.

With Whaley’s swift judgment and confident on-camera demeanor, you wouldn’t suspect that she had no formal broadcast journalism training. She earned a history degree from Rice and soon after graduation started at ABC13 as a news intern and videotape editor. “Going into TV was an exercise in setting a goal and making it happen,” Whaley says. “I just went into everything saying, ‘Sure, I’ll do it!’ And I’d figure out how to do it later.”

Whaley developed a demo reel at ABC13 that landed her a job as a reporter and weather forecaster in Victoria, Texas. A year later, she moved up to a larger market in Lafayette, La., as a reporter, anchor and weather forecaster. After two years there, she relocated to Las Vegas for a reporter and anchor position, where she also earned her meteorologist certification. When a traffic anchor position opened up at ABC13, Whaley felt she had gone full circle: back at her first station and just down the street from her alma mater.

While her 8 p.m. weekday bedtime presents a number of social conflicts, she doesn’t let it keep her from enjoying a fun evening once in awhile. “I allow myself one normal night each week to emcee an event, try a new restaurant with my husband or grab drinks with my girlfriends,” Whaley says. “I like to think of myself as being in a different time zone. That helps me stick to my schedule.”