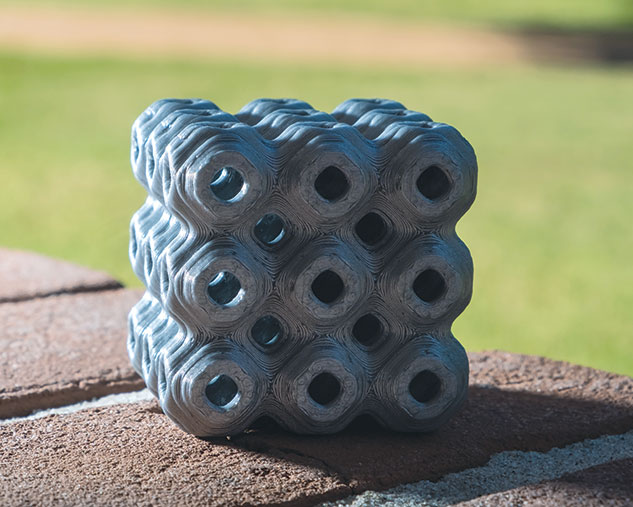 Rice University engineers are using 3-D printers to turn structures that have until now existed primarily in theory into strong, light and durable materials with complex, repeating patterns. The porous structures called schwarzites are designed with computer algorithms, but Rice researchers found they could send data from the programs to printers and make macroscale polymer models for testing. Their samples strive to use as little material as possible and still provide strength and compressibility. It may someday be possible, researchers said, to print an entire building as one schwarzite “brick.”

Schwarzites, named after German scientist Hermann Schwarz, who hypothesized the structures in the 1880s, are mathematical marvels that have inspired a large number of organic and inorganic constructs and materials.

Such structures remained theoretical until 3-D printers provided the first practical way to make them. The Rice lab of materials scientist Pulickel Ajayan, in collaboration with researchers at the University of Campinas, São Paulo, investigated the bottom-up construction of schwarzites through molecular dynamics simulations and then printed those simulations in the shapes of polymer cubes.

“The geometries of these are really complex; everything is curved, the internal surfaces have negative curvature and the morphologies are very interesting,” said Rice postdoctoral researcher Chandra Sekhar Tiwary, who led an earlier study that showed how seashells protect soft bodies from extreme pressure by transferring stress throughout their structures. “Schwarzite structures are very much the same,” he said. “The theory shows that at the atomic scale, these materials can be very strong. It turns out that making the geometry bigger with polymer gives us a material with a high load-bearing capacity.”

“It is a little surprising that some atomic-scale features are preserved in the printed structures,” said Douglas Galvão, a professor at the University of Campinas who studies nanostructures through molecular dynamics simulations. He suggested the project when Tiwary visited the Brazil campus as a research fellow. “After some tentatives, it worked quite well. This paper is a good example of an effective theory-experiment collaboration.” In the far future, the researchers envision printing 3-D schwarzites with ceramic and metallic materials on a grander scale. — Mike Williams